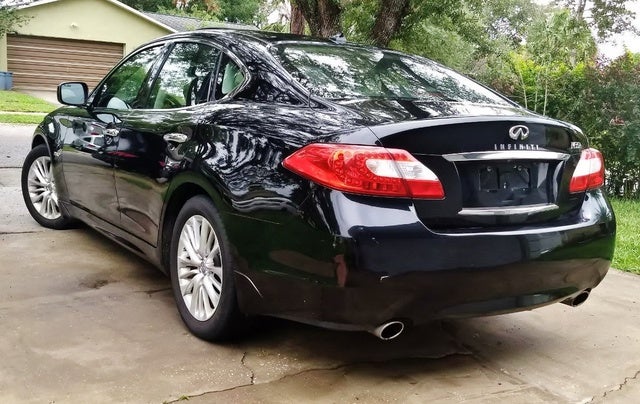 Now entering the 2012 arena is an all-new midsize sport sedan contender: the Infiniti M Hybrid. It's an exciting glimpse into the future featuring Nissan's very first application of its Direct Response Hybrid system and several one-of-a-kind bleeding-edge technological considerations. The M Hybrid looks like a sports car, accelerates like a sports car and handles like a sports car—and a good one at that—but it purrs so quietly it needs a special Vehicle Sound for Pedestrians (VSP) module to let others outside of the car know you're coming.

While every other Hybrid is busy trying to make a boring daily commute just a bit less of a gas-suck, Infiniti has gone and built something genuinely fun with V8 performance on a 4-banger's budget. Sure, the M Hybrid may not fly in the conventional sense, instead preferring just over 5 seconds to reach 60 mph on the ground, but it is the pure-heart hybrid of the future we've been waiting for, and it has finally arrived on the consumer market for 2012.

Early drivers so far back up every claim made by Infiniti—the M Hybrid is basically the same exact car as the M56 but with much better fuel economy. Zip to 60 takes exactly the same time, despite the Hybrid having two fewer cylinders and nearly 100-point differences in horsepower and torque, but where the M56 and its V8 offer that performance at 16 mpg city/26 highway, the M Hybrid delivers it at 27/32. It has the brawny engine, expectedly stiff ride and nimble road manners, well-appointed interior and upscale feature inclusions you have come to expect from the M, and all option packs available to other M trims are also available to the M Hybrid. The only significant differences are the double-clutch gasoline-and-electric engine, and a $6,000 price premium.

Next to that, a few things had to change about the inside and mechanicals to accommodate the Hybrid's special powerhouse. Trunk space, for instance, is abridged by almost 4 cubes for a total of 11.3 cubic feet for storage. Although the M Hybrid is only slightly heavier than its counterparts—about the weight of one passenger, just 176 pounds—it uses the stiffer sport suspension optional for the other M trims to handle its weight. Many of the components, such as steering pieces and the engine itself, shut off periodically, unlike in any other M, and allow the M Hybrid to cruise at speeds up to 62 mph powered by its lithium-ion battery alone roughly half the time.