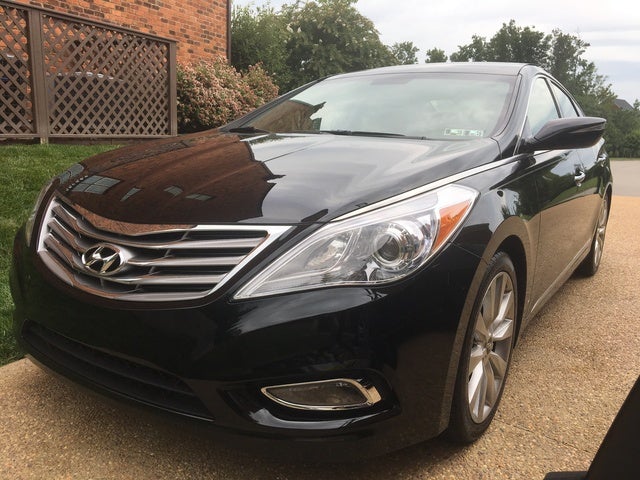 The all-new second-generation Hyundai Azera kicks off for 2012 as the final installment in a 2-year renovation of Hyundai's volume leaders. Aside from the obvious and award-worthy style change, the 2012 Azera also gains a new engine, new interior materials and more safety considerations and features than the average driver would expect out of a car in its price range—but that's just what Hyundai does.

The Azera may not be the show-stopping top-seller its twin is in Korea, but there's good reason—the Grandeur, as it is known over there, flies off lots so fast Hyundai can barely keep up with demand. Koreans love their Grandeur so much Hyundai had to produce every 2011 Azera in the fall of 2009 to make room for the 2012. It's no surprise then for Hyundai to make sure the Azera remains a well-kept secret, and for 2012 Hyundai plopped a pot of gold at the end of the rainbow for those bold enough to seek out the new Azera.

Hyundai is aiming high, very high, comparing the Azera to the Buick LaCrosse and Acura TL, not to mention throwing a bit of a challenge at BMW and Benz with an optional power rear sunshade and unique rear side glass sunshades. Hyundai stretched the Azera to fit more front head- and legroom than any sedan in its segment and then loaded it up in the company's usual wow-inspiring form, raising the bar with segment-first features like the manual side shades, standard navigation with rear-view camera and 90 days of the Blue Link infotainment system on the house, which features voice-command cellular texting, location-sensitive search, turn-by-turn navigation and an automatic monthly report on the health of your Azera.

The Azera's Lambda 3.3-liter V6 gained direct injection for 2012, putting out at least 30 hp more than the previous version, so it's now dubbed the Lambda 2. Good for 293 hp compared to the 2011's 260 and 255 lb-ft of torque instead of the previous 233, Hyundai boasts that the combination of this engine with its 6-speed automatic with manual shifters gives the Azera a best-in-class 23 mpg combined, or 20 mpg city/29 highway.

Safety and comfort come together for the 2012 Azera, which features Vehicle Stability Control to keep the car balanced in extreme situations or even when the driver is just a little under-experienced in wet conditions. Nine airbags will soften any blow, while a smart braking system adjusts itself to the current conditions and car load. To be sure, Hyundai left no stone undisturbed for the Azera's grand entrance to 2012, and if the early reports are true, feel free to let your hopes soar with the hype. Hyundai has delivered a gem.

Have you driven a 2012 Hyundai Azera?
Rank This Car

While driving on the interstate, suddenly my car started to shake while accelerating and the check engine light started blinking. Any suggestions? Could it be my catalytic converter?