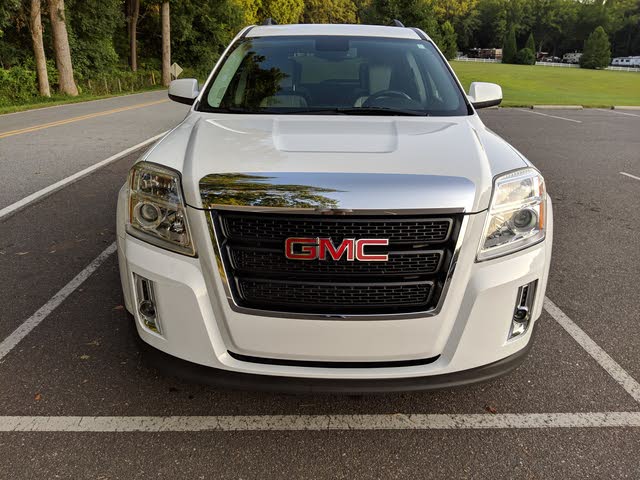 There are more capacious, more agile and more performance-oriented midsize crossovers out there, but GMC’s 2012 Terrain offers a pleasing cabin atmosphere and some hefty mileage numbers, not to mention available all-wheel drive and V6 power. This competent Jimmy is designed for the tolerably well-off family and offers some untraditional (though costly) extras for the daily commuter. Yeah, this is a pretty solid baby ute, but check out the competition before signing on the dotted line.

Based on its Chevy Equinox peers and looking a little like a miniaturized Cadillac Escalade, GMC’s 2012 Terrain remains a bit classier than the one, but distinctly less plush than the other. What this 5-passenger midsize crossover does well is provide practicality and efficiency for the average family, especially those downsizing from a gas-guzzling full-size ute, a la the Yukon, Escalade or Tahoe. A goodly number of traditional creature comforts, plus sedan-like ride comfort and class-topping fuel-economy numbers, not to mention a bold no-nonsense look, ought to quickly permit people to forget those clunky, truck-based, gas-eating, garage-challenging SUVs.

Four trims—the base SLE1, the lower mid-level SLE2, the amped-up SLT1 and the flagship SLT2—comprise the Terrain lineup, with all editions toting 63.9 cubic feet of cargo space with the rear seats folded and a commodious 31.6 cubic feet behind the second row. Of course, this midsize Jimmy comes in the standard front-wheel-drive (FWD) configuration, but all-wheel drive with intelligence (AWD-i), boasting automatic and instantaneous torque redirection from the wheels that slip to the wheels that grip, remains available to all trims. New stuff for this year’s Terrain lineup, meanwhile, includes Flex Fuel (E85) ethanol capability in the standard 4-cylinder engine, while the now-standard audio system’s 7-inch color touchscreen can be paired with Bluetooth audio streaming and Internet capabilities. An available new safety feature in higher Terrain trims is a lane-departure warning and forward collision alert system.

Lest the folks at GM become too smug, there are a number of downsides to this boxy crossover. It has decidedly less cargo space than many rivals, while agility is, well, spare, to say the least. Acceleration in the standard 4-cylinder engine is only tepid, while even the optional V6 powerplant is not as quick off the line as its 264 ponies might indicate. Then, too, this midsize Jimmy carries a rather hefty base price that could put a strain on the budget.

With all that in mind, the new-car-shopping family might want to kick some tires on the roomier Ford Edge, the self-explained Honda CR-V, the more affordable and off-road-capable Subaru Forester or the refined and more agile Toyota RAV4.

Should, however, brand loyalty, patriotic fervor or even such interests as traditional creature comforts compel the purchase of a domestic crossover ute, the 2012 Terrain is a pretty good choice.

All 2012 Terrain trims are delivered with a variable-valve-timed (VVT) 2.4-liter inline 4-cylinder (I4) engine, now with E85-capable Flex Fuel (FFV) technology. The I4 remains under the management of a 6-speed shiftable automatic transmission for some 182 hp at 6,700 rpm and 172 lb-ft of torque at 4,900 rpm, good enough that the 3 highest trims can tow up to 1,500 pounds with the proper equipment. Look for the four-banger to sport gas mileage numbers in the range of 22 mpg city/32 highway with FWD, while numbers for AWD trims drop to 20/29.

Optional to all trims except the SLE1 is a 3.0-liter V6 powerplant, also with VVT efficiency and Flex Fuel adaptability, which again mates with the 6-speed shiftable automatic for 264 hp at 6,950 rpm and 222 lb-ft of torque at 5,100 rpm. Towing capacity in the V6-equipped Terrain jumps to 3,500 pounds, with proper equipment, but mileage figures dive to 17/24 for both FWD and AWD versions.

No matter the engine size, the 6-speed flaunts hill-start assist and auto grade braking, while the AWD system allows cruising in FWD under normal driving conditions, with power delivered automatically to all 4 wheels when roads start to get slick.

In tests, an I4-equipped FWD Terrain plodded from 0-60 in a rather lackluster 9.4 seconds, while an AWD-toting edition with the V6 made the same journey in a mediocre 8.3 seconds.

Reviewers note that the I4 is fine for downtown traffic, but has problems keeping up with merging and passing expectations on the highway. The V6 also comes in for some denigrating comments with its perceived failure to provide pickup to the gas pedal. A few reviews additionally note that the 6-speed automatic is a bit slow to downshift when in full automatic mode, with this phenomenon especially noted when engaging the V6. Finally, many reviewers note an unrefined whine from the four-banger on hard acceleration, though all concede that it settles down nicely at highway speeds.

The touring-oriented 4-wheel independent suspension returns on the 2012 Terrain lineup, as do the standard MacPherson front struts, the multi-link rear end and the stabilizer bars front and rear. All but the top-shelf SLT2 roll on 17-inch painted alloy wheels, while the flagship trim flaunts 18-inch chrome-clad wheels. Of course, all-season tires again adorn each of the 4 trims.

Ride comfort in this midsize Jimmy crossover is described by virtually all reviewers as more than competent. Several reviewers opine that bumps and cracks are handled handily no matter the tire size, while others mention a distinct deterioration in ride quality from the larger wheels bearing the flagship SLT2. Nearly all reviewers agree, however, that overall composure is as solid and confidence inspiring as that of a full-size ute and that this crafty crossover reflects well on the smooth-riding reputation that GM has always enjoyed with its utes.

Handling, alas, is a different matter. Reviewers claim that a noticeable lack of feedback from the steering wheel keeps this quasi-ute from demonstrating any sort of agility in corners, while the smaller tires adorning the 3 lower trims restrain nimbleness even further. Most reviewers do note that this Jimmy isn’t designed to bust a slalom course or breezily conquer mountain switchbacks and that it ought to perform just fine in the more subdued tasks expected of it.

Brakes, finally, are noted by most reviewers to be powerful and true. In tests, an I4-toting Terrain came to a stop from 60 mph in 121 feet, while its heavier V6-equipped sibling stopped in 127 feet. Both results are confirmed in reviews as darned good for the segment.

Let it not be said that the 2012 Terrain disappoints as far as traditional standard features are concerned. The entry-level SLE1, for example, boasts cloth upholstery, a height-adjustable and 2-way power-adjustable driver’s seat with power lumbar support, as well as sliding and reclining rear seats. Remote power door locks, heated power-adjustable outside mirrors, and power windows, of course, remain standard, as do a tilting and telescoping steering wheel and a rear-view camera. The simulated alloy steering wheel mounting cruise controls and redundant audio controls gives the cabin a touch of class, as does the simulated alloy trim decorating the doors and center console. Bluetooth-interfaced OnStar Directions and Connections services remain standard, as do the auto-dimming rear-view mirror, manual air conditioning and front and rear floor mats. Finally, the standard single-CD player with 6 speakers, satellite radio and a USB connection additionally boasts a brand-new 7-inch color touchscreen display.

The amped-up SLT1 throws in standard leather upholstery and heated front seats, while the flagship SLT2 flaunts all of the above plus skid plates, a power sunroof, a rear power liftgate, chrome-clad wheel covers, reverse-tilting outside mirrors and rear parking sensors.

Options-wise, all 2012 Terrain editions can be delivered with available Convenience and Protection packages that boast added cargo management items, upgraded exterior protection coatings and carpeted floor mats. The SLE2 and higher trims can also be equipped with an available trailer hitch and wiring, roof-rack crossbars, a memory-card-based navigation system and, new for 2012, GM’s IntelliLink Internet accessibility for services like Pandora and Stitcher radio, all using Bluetooth music streaming. Finally, the 3 highest trims, in keeping with their top-shelf status, can be equipped with the Chrome and Technology Package with V6 power, 19-inch alloy wheels and an upgraded navigation suite, while standalone options include a power sunroof and rear-seat DVD entertainment.

Reviewers are impressed with the 2012 Terrain’s pleasant and welcoming cabin ambiance, as well as its large and readable gauges, handy control locations and generally upscale interior materials. Seats are complimented by most reviewers as comfortable and supportive, with the reclining and sliding second-row seats drawing special praise for adding some uncommon rear-seat leg and foot room.

On the other hand, some compromised visibility rearward due to the tall rear-seat headrests is noted by a number of reviewers, while others find too many distressingly similar buttons that require eyes-off-the-road deciphering.

Traditional family-oriented safety equipment standard in the 2012 Terrain lineup includes 4-wheel antilock brakes (ABS) with emergency braking assist and electronic brakeforce distribution, as well as traction and stability control, front and rear head airbags, and dual front side-mounted airbags. Daytime running lights and front fog/driving lights, of course, remain standard lineup-wide, as do dusk-sensing headlights and a post-collision safety system, not to mention a remote antitheft alarm. Again, standard OnStar post-crash alerts and stolen-vehicle recovery assistance adorns all 2012 Terrains, while the flagship SLT2 can be equipped with the optional lane-departure warning and a forward collision alert when the Chrome and Technology Package is selected.

Among the most common complaints owners have with the 2012 Terrain lineup is the perception that GMC’s mileage claims may be bit inflated. Tepid acceleration from both the I4 and V6 powerplants also distresses a number of owners, as does a tendency on the part of the automatic transmission to slip and jerk when downshifting. Lackluster cargo room and some glitches in the standard techno-goodies (stereo, rear-view camera) also peeve a few owners, while some others bemoan this Jimmy’s lack of a third-row seat and iffy rear visibility.

Owners are distinctly more positive in noting the Terrain’s practicality, good (if often controversial) looks and admirable safety scores. Kudos are also given by a number of owners for its available AWD capability, as well as for this mini-ute’s surprising ride comfort, plethora of standard amenities, quiet cruise and competent value.

joeylu My 2012 Terrain I4 seemed to slip and clunk into gear from the beginning. When I took it in they said it was normal. Sounds and feels just like a slipping tranny to me. I hate that. Mp3 works right sometimes and other times it doesn't come through from my phone unless I plug and unplug 3 or 4 times. Otherwise I like my car. But Tranny thing still drives me nuts.

Users ranked 2012 GMC Terrain against other cars which they drove/owned. Each ranking was based on 9 categories. Here is the summary of top rankings.

Have you driven a 2012 GMC Terrain?
Rank This Car

My seat will tilt back but not tilt forward. It will move up, down, back and forward. How's do I check to see if it's a fuse or a bad switch

where is the fuel rail pressure sensor bank 1 located.

The display screen in my 2012 Terrain SLE went black. No radio, no back up can and none of the controls are responsive

Are 2012 GMC Terrain Notorious For Any Major Problems