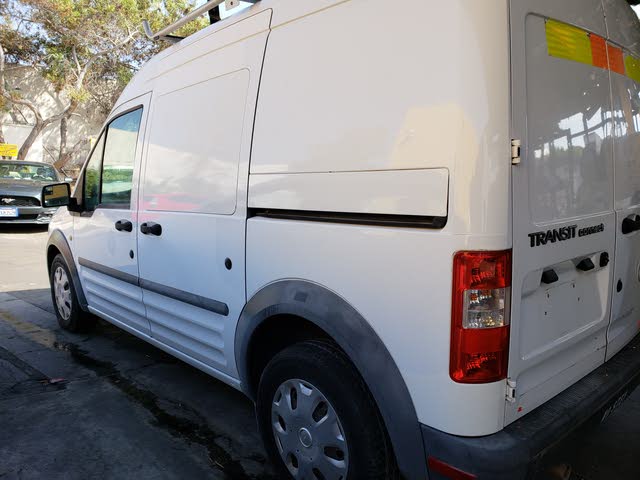 Less than merely tepid acceleration, a paltry payload weight limit, no all-wheel-drive option and a racket-prone powerplant will remind everyone that the little 2012 Transit Connect cargo carrier is meant for the bottom line rather than Best In Show.

While those gas-guzzling full-size vans common to America’s highways have their place in the realm of heavy-duty cargo-toting options, Ford’s 2012 Transit Connect uses its maneuverability to go where few of the usual work-oriented behemoths dare to tread. Its cargo area is spacious enough for most medium-duty chores, while fuel consumption is minimized. If you’re not in a hurry and need the techno-gizmos to keep your business in the black, this scamp of a van (or wagon) will surely help boost your bottom line.

It doesn’t get anywhere in a hurry, and it doesn’t have the cargo capacity of most full-size cargo vans, but if it's value, utility, efficiency and maneuverability you’re looking for, the 2012 Ford Transit Connect small cargo van and passenger-oriented wagon trims fill a necessary niche. Inexpensive to own and to drive, this 2- or 5-passenger van/wagon offers a practical downsized alternative to the gas-eating, ponderous and costly full-size titans we’re used to seeing.

The latest Transit Connect edition comes in 4 trim levels, the base Cargo XL, the upper-end Cargo XLT, the passenger-friendly Wagon XLT and the even friendlier Wagon XLT Premium. Two-passenger Cargo versions are decidedly Spartan inside and out, while Wagon trims don’t exactly reach the level of posh, but do offer second-row bench seating for 5 and some added amenities. Cargo versions tote nearly 130 cubic feet of total cargo capacity, while the Wagon iterations boast that same 130 cubic feet with the rear seats folded, or 78.4 cubic feet of cargo capacity with the rear seats upright.

For 2012, this little van/wagon gets a standard anti-skid rollover sensor lineup-wide (what we mortals call stability control), and that concession comes only as a result of a government mandate. Otherwise, the Transit Connect stands pat from 2011.

Niche-wise, Ford’s urban-ready van (or wagon) has its place, but its inadequacies should be noted. First off, the less-than-potent 2.0-liter 4-cylinder “power”-plant has enough to deal with in motivating the 2,600-pound Focus, thus potential buyers are invited to do the math when it’s tasked with powering the 3,470-pound Transit Connect. And tire kickers should also be advised that bulk may not be a problem, but a payload capacity of only 1,600 pounds might be.

In any case, for those who want even less of a footprint in their cargo van or pint-size passenger wagon, Chevy’s tiny HHR Panel has it, but utility suffers, while the Daimler Sprinter offers a whole lot more space, but for a whole lot more money. Dodge’s minivan-based C/V might be a viable alternative to the Transit Connect, and it comes with a bigger engine to boot. Then there are the more traditional alternatives, such as Nissan’s surprisingly competent NV and the practical Chevrolet Express with its available all-wheel-drive winter-beating capability. 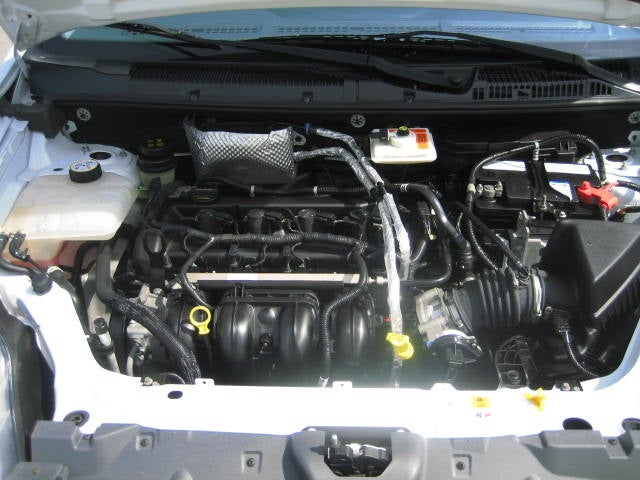 Sporting a 2.0-liter inline 4-cylinder (I4) engine and an underwhelming standard 4-speed automatic transmission, the front-wheel-drive-only (FWD) 2012 Transit Connect finds peppy performance a forlorn hope. This tepid four-banger ekes out 136 hp at 6,300 rpm and 128 lb-ft of torque at 4,750 rpm, which simply can’t make easy work of highways, hills and hefty loads. But, and this is a pretty big “but,” mileage is estimated at a comparatively budget-blossoming 21 mpg city/27 highway for Cargo vans, and 22/27 for Wagon editions.

All trims can, meanwhile, be delivered with a compressed natural gas/liquid propane (CNG/LP) engine prep package for cleaner and even more fuel-efficient work days.

Tests have the 2012 Transit Connect plodding from 0-60 in 12.6 seconds, which is about as slow as things get for the class, and this was with an empty cargo bay. Virtually all reviewers complain that acceleration, barely adequate from a stop, is woefully inadequate to passing and merging chores on the highway. When going uphill with a load on, drivers might want to pack a lunch, because it’s going to be a long trip. Around town, on the other hand, where hefty acceleration comes in handy only when in a race for that last open parking space, the Transit Connect, with only a little head start, fares a bit better. Reviewers also note that the 4-speed often hesitates on downshifts when laboring up hills, making an already frustrating situation even worse.

Finally, the noisy four-banger proves distracting for virtually all reviewers, with most unable to tell about road and wind noise since the engine racket obliterates all other noise. The solution, according to a number of reviews, is to turn the stereo up to full volume and sing along loudly.

The ride in this urban-oriented van is noted by most reviewers as surprisingly compliant for its class. Most bumps and cracks will be felt, but few will result in any disturbing harshness.

Handling is also praised by reviewers as almost nimble in comparison to most rivals. A low center of gravity bolsters a generally adequate steering balance that encourages plenty of feedback from the road, according to reviewers, and many compliment Ford’s pint-size cargo wagon on its highway stability, though all caution that gusty winds will be a challenge. Additionally, reviewers admire the Transit Connect’s spare and lofty profile as admirably suited to the urban scene, with a 39-foot turning radius contributing to its graceful ease in maneuvering tight lots and busy downtown streets.

Tests of this funky Ford found it coming to a stop from 60 mph in 135 feet, which reviewers claim to be among the best numbers in its class, thereby indicating no glitches with the brake system.

Ford’s 2012 Transit Connect lineup is not designed to overwhelm occupants with posh. The base Cargo Van XL, for instance, offers cloth upholstery, a height-adjustable driver’s seat and front captain’s chairs. Telescoping tilt-wheel steering and air conditioning are complemented by an AM/FM stereo with 2 speakers and auxiliary iPod integration.

The people-toting Passenger Wagon XLT, meantime, throws in a 3-person rear bench seat with a split-folding seatback and a pair of additional speakers, while the top-shelf Passenger Wagon XLT Premium (aka Taxi) adds in swing-out rear quarter windows, unique exterior trim pieces and storage pockets in the rear passenger doors.

Where this Ford hauler stands out from the crowd is in its available work- and business-enhancing techno-tricks. The Crew Chief vehicle system means fleet vans will be monitored as to timely arrivals, while an optional in-dash computer with Internet capability, as well as wireless mouse and keyboard, is bolstered by a Garmin navigation suite and can be further enhanced with Bluetooth hands-free technology. Finally, the available Tool Link tool tracking and inventory system means less downtime trying to find the right tool, as well as fewer tools disappearing during the course of the day.

Reviewers note that controls are simple and well-placed, while gauges are large and easy to read. Reviewers also concede that the Transit Connect is a beast of burden and that Spartan is the name of the work-van game. Thus expect lots of low-rent plastics and few telegenic toys aboard this working stiff. Seats, though lightly padded, according to reviewers, nevertheless remain adequately bolstered for a long work day. Finally, most reviewers find the long, low cargo floor well-suited to easy loading and unloading, while cabin stowage is deemed better than adequate in a majority of reviews.

The National Highway Transportation Safety Administration gives this shifty van its next-to-worst score of 2 stars in overall safety, with 2 stars awarded for side-impact protection and a third-best 3 stars for front crashworthiness and rollover protection.

By far the biggest complaint owners have with the 2012 Transit Connect is its less-than-lackluster acceleration. A few owners also complain that mileage is not as advertised, though frustration with fuel-economy figures can probably be attributed as much to a lack of refinement in driving habits as to problematic engineering and testing criteria. Finally, a number of owners find Ford’s city-friendly van/wagon roomy enough, but hardly ultra-comfortable for a long day of deliveries or job calls.

On the positive side, owners regard this nifty delivery vehicle as ideal for inner-city maneuvers, while Ford’s touted work-oriented techno-goodies garner a wealth of kudos. Bottom line, owners of the 2012 Transit Connect are looking for the biggest bang for their van or wagon dollar, and this value-laden hustler doesn’t disappoint.

What's your take on the 2012 Ford Transit Connect?

Users ranked 2012 Ford Transit Connect against other cars which they drove/owned. Each ranking was based on 9 categories. Here is the summary of top rankings.

Have you driven a 2012 Ford Transit Connect?
Rank This Car

Not As Advertised Issue?

I viewed vehicle and it has an undisclosed accident. What type of checks do you do for unscrupulous dealers? I drove 100 miles to see vehicle after they said no issues. Should I just notify BBB a...

I’ve been trying to locate the problem for a while now. The van has started to climb in temperature and neither fan turns on when I activate the a/c. Which fan is the a/c fan and which is the radi...

I'm in the market for a work vehicle for Gary's av

i have a 2012 ford transit connect and the key refuses to come out of the ignition. any suggestions?

I just traded in my 2012 Subaru Forester for a 2012 Ford Transit Connect. Although my gut told me I was down trading because the Subaru had power, was rated well for safety and was 4WD, I found it had...