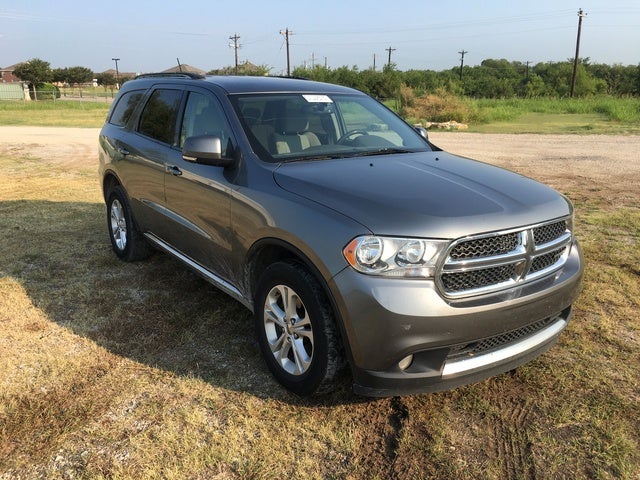 Good looks, uncanny agility, an available V8, some hefty towing capacity and 3 rows of seating are among the plethora of positives in the 2012 Dodge Durango.

Snazzy as well as utilitarian, nimble and modestly plush, the 2012 Durango ought to fit right into the family. Despite some minor drawbacks, this handsome crossover does just about everything well and remains a hoot to drive besides. Chrysler/Dodge has put out a winner.

Perhaps Chrysler Corporation’s recent brush with insolvency made it see the light. Reviewers, owners, even mechanics suddenly rave about the quality of many of the automaker's new products, and especially about the revived next-gen Dodge Durango. This midsize, family-oriented 7-or-8-passenger crossover sports a spiffy look, startling agility, available all-wheel drive (AWD) and a choice between V6 economy and V8 power. A bit of trim shuffling is among the changes for this year, along with a new 6-speed shiftable automatic that’s mated with the available V8 powerplant. Additionally, due to popular demand, second-row captain’s chairs are scheduled to be available across the lineup later in the year. Handling prowess, however, is the 2012 Durango’s stock-in-trade. Sharing its platform with its Jeep Grand Cherokee cousin, which, in turn, found inspiration in the Mercedes-Benz M-Class, Dodge’s snazzy crossover is described almost universally as a kick to drive. Go figure!

In a nod to modern sensibilities, the base Durango trim has been renamed the SXT (ex-Express) and joins the feature-rich Crew, the sport-minded R/T and the top-flight Citadel in the starting rotation. In perhaps a further nod to simplicity, the Heat trim has been dropped for 2012, as has the Crew Lux. Each of the 4 remaining trims sports 3 rows of seating and 84.5 cubic feet of cargo capacity with the rear seats folded, and all feature fold-and-tumble second-row bench seating as well as a fold-flat front passenger seatback. Additionally, all trims except the R/T boast standard V6 power and all, including the R/T, come with standard rear-wheel drive (RWD), but each is additionally available in an AWD configuration. Finally, the sporty R/T comes equipped with a standard V8 engine, as well as a sport-tuned suspension, for a little more kick on the way to work or the mall.

The Chevy Traverse and Ford Explorer are the Durango’s closest competitors, with the former offering extra cargo and cabin space and the latter some additional standard techno-wizardry and an efficient Eco-boost 4-cylinder powerplant. Also worth a look is Mazda’s surprisingly versatile CX-9. The Durango, however, stands tall among this group and should not be ignored when shopping for a new family crossover. 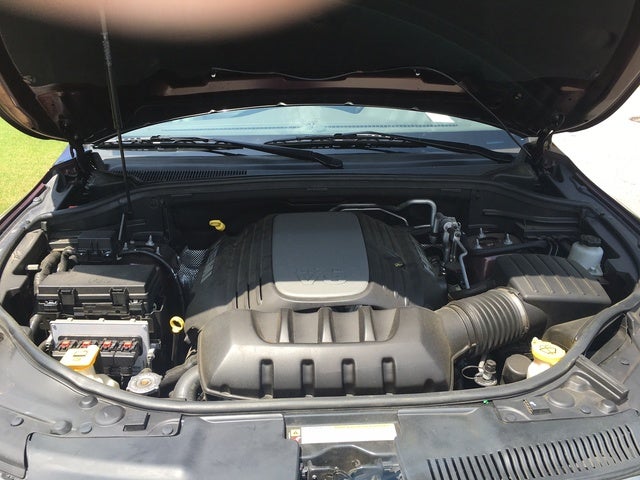 The standard powertrain for all 2012 Durango trims except the R/T is an ethanol-fuel-capable (FFV) 3.6-liter V6 engine that’s mated with a 5-speed shiftable automatic transmission. This combo puts out 290 hp at 6,400 rpm and 260 lb-ft of torque at 4,800 rpm, with variable valve timing offering 16 mpg city/23 highway for both RWD and AWD trims. The part-time AWD system kicks in when wheel slippage is detected, though it can be engaged using the standard auto-locking hubs as well. Towing with the six-banger, meantime, is maxed out at 5,000 pounds with the proper equipment.

Standard for the Durango R/T trim is a performance-laden 5.7-liter Hemi V8 that mates with a brand-new 6-speed shiftable automatic for 360 hp at 5,150 rpm and 390 lb-ft of torque at 4,250 rpm. This potent V8, again boasting VVT, as well as the multi-displacement cylinder shut-off feature that shuts down 4 of the 8 cylinders at cruising speed, is estimated at 14/20 in the RWD configuration and 13/20 with AWD. The Hemi V8/6-speed automatic is also available for the Crew and Citadel trims, as is the R/T’s unique on-demand AWD system, which features not only automatic torque application to the wheels that grip, but also electronic hi-lo gear selection for the lower gearing often necessary in tough road conditions.

One test drive of the V6-equipped Durango resulted in a 0-60 time of 9 seconds, just a tad under the usual for this class. Low-end torque in the V6 is described by several reviewers as a bit tepid, but this adequate six-banger has no problems on the highway. The 5-speed automatic is smooth enough, reviewers claim, but it takes a hefty bounce of the gas pedal to get it to downshift. The Hemi V8, always a favorite with reviewers, doesn’t disappoint in the Durango, and the just-introduced 6-speed automatic only enhances the Hemi’s performance. Both powerplants are described by most reviewers as serene and refined. Finally, the brake hill-holder feature is standard across the lineup.

Not a small vehicle by any means, the 2012 Durango nonetheless demonstrates startling agility, with the hefty curb weight and standard 18-inch alloy wheels on the SXT and Crew trims cushioning bumps enough that the ride seems almost posh. A 4-wheel independent suspension is complemented by a double-wishbone front end and multilink rear suspension, with front and rear stabilizer bars adding their bit to the cause. Hard turns don’t faze the Durango, which, according to reviews, maintains its composure admirably on windy back roads. Steering, whether cruising on the highway or slaloming the S-turns, is described by virtually all reviewers as well-balanced, and brakes are noted as potent and true, with no pedal glitches. The Durango’s tight turning radius is a pleasant bonus in crowded mall parking lots, too.

Topping things off, the R/T features a sport-tuned suspension and, along with its Citadel sibling, boasts standard 20-inch alloy wheels. The performance-oriented R/T also comes equipped with a standard rear load-leveling suspension system. Though claiming that the ride is noticeably stiffer in this sporty trim, many reviewers concede that those big all-weather tires still do a good job of keeping occupants in their seats, even on rougher roads. The Citadel, meanwhile, offers a near-luxurious cruise, even with the 20-inch rubber, but it too, enjoys some playtime.

For a tolerable MSRP of around $29,000, the 2012 Durango SXT comes laudably well-equipped. Standard cloth upholstery, a fold-flat front passenger seatback and a rear folding center armrest announce that this base trim is no mere plaything. Then there are front power windows, remote power door locks, heated power-adjustable outside mirrors, cruise control, telescoping tilt-wheel steering, steering-wheel-mounted audio and cruise controls and three-zone climate control to round out comfort and convenience features. Entertainment, meantime, is in the form of a standard MP3-capable single-CD player with 6 speakers, complemented by Sirius satellite radio and, for communications, phone pre-wiring.

In keeping with its high-end status, the Durango Citadel carries all the amenities that its Crew siblings enjoy, plus premium leather upholstery and cabin accents, heated front and second-row seats, a power sunroof and a heated steering wheel. Then there are such niceties as standard adaptive cruise control and power-adjustable telescoping tilt-wheel steering, as well as standard maintenance and roadside assistance programs and 40GB of HD music storage.

Options for the lower Durango trims, as is traditional, include many of the features found standard on the Citadel. Options available throughout the lineup include the popular UConnect in-vehicle communications system, as well as the Trailer Tow Group with Class IV hitch, 4- and 7-pin wiring and rear load-leveling suspension. Standalone options include second-row captains chairs (late availability), skid plates and rear-seat DVD and Sirius TV entertainment. The flagship Citadel is further eligible for a Garmin hard-drive-based navigation system.

Reviewers find the Durango’s interior welcoming and well-stocked with comfort and convenience goodies. Seats are described as generous and comfortable, though cabin storage is at a premium and cargo room is less than that found in many rivals. Visibility aft could be better due to high rear-seat headrests and an oddly shaped rear window, but the unique fold-and-tumble second-row seats are noted as simple and effective in providing ample access to the third row.

The National Highway Transportation Safety Administration (NHTSA), just getting up to speed on its recently toughened testing data, has no current data on the revamped Durango. The Insurance Institute for Highway Safety (IIHS), however, has the 2011/2012 Durango line tagged as a Top Safety Pick, with its best score of Good in front and side impact tests as well as roof strength tests.

A surprisingly large number of owners of pre-2012 Durangos complain vociferously about the lack of available captains-chair second-row seating. Well, Dodge listened and will offer said captains chairs to the Durango lineup at some point during the 2012 model year. Thus, remaining owner issues include some rather uninspired cabin decor in the lower trims, tacky plastic wheel covers on the R/T and Citadel, a few visibility issues and some tepid mileage numbers, especially with the V8 engine. Additionally, a number of owners feel that the cramped third-row seats, though generally impressive to reviewers, could be improved upon.

Plenty of standard features and downright sexy handling characteristics, however, make most owners want to all but live in their new Durango. Then there’s the aforementioned V8 that may be short on efficiency, but sure is long on pizzazz, not to mention towing capacity. Cabin room, ride comfort, family-friendly safety equipment and rugged good looks have a growing number of owners reveling in Dodge’s classy crossover.

Users ranked 2012 Dodge Durango against other cars which they drove/owned. Each ranking was based on 9 categories. Here is the summary of top rankings.

Have you driven a 2012 Dodge Durango?
Rank This Car

502 views with 2 answers (last answer about a year ago)

Low Range Light Is On ...wont Disengage Out Of Low

416 views with 4 answers (last answer about a year ago)

2012 Dodge Durango when I start the car the blower turns off and then on about 4 times and then runs normal after that. Doesn't matter what setting its on (high or low)