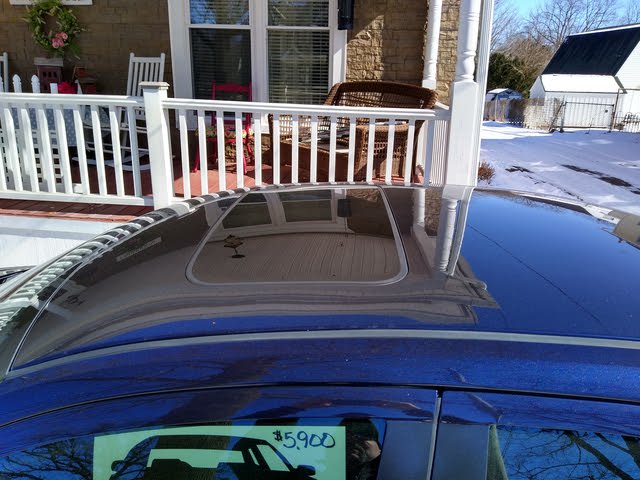 Dodge revamps the Avenger's lineup for 2012, adding a new lower-end, V6-powered SE V6 trim as well as a new top-of-the-line, sport-oriented Avenger R/T, which holds the distinction as the most powerful midsize sedan available in the U.S.

The 2012 Avenger's base 4-cylinder engine lacks the performance of similar powerplants found in a number of competitive vehicles, and fuel economy numbers likewise come up short when matched up against some competitors.

While some critics might have issues with the Avenger, such as its tight rear seat and under-performing base engine, owners give the Avenger a big thumbs up, thanks to its aggressive exterior styling, comfortable cabin and smooth ride. The Avenger may not have the cargo space or rear-seat legroom of some of its competitors, but if you're looking for a midsize sedan that stands out from the crowd, the Avenger should be on your list.

Since the relaunch of the Avenger midsize sedan in 2008, Dodge has reconfigured its trim lineup just about every year, which might make it a little difficult for prospective buyers to match apples to apples when comparing the vehicle from year-to-year or against its competitors. For 2012, the mid-level Avenger SXT trim remains at the center of the lineup, with the SE and new SE V6 trims serving as the entry points and the SXT Plus and updated R/T trims offering upscale and sport-oriented options, respectively.

The new SE V6, equipped with a 283-hp engine and a 6-speed automatic, offers buyers an affordably priced V6-powered sedan, while the R/T, which rejoins the lineup after disappearing for a year, now features a stiffened suspension, a center-mounted tachometer and performance-inspired design. The additions must be working with buyers, since Dodge notes that sales of the Avenger have increased more than 100 percent over the previous year, which is saying something for a sedan that's well into its current generation.

The Avenger's main attraction remains its styling and more than likely its name (who wouldn't want to be seen driving something named an Avenger?). Introduced as a 2-door coupe during the mid-'90s, the Avenger disappeared completely from showrooms from 2000 to 2008. When it re-emerged, it displayed its current sporty exterior design, with the aggressive split-crosshair grille, sculpted fascia and hood, pronounced wheel wells, bulging shoulders and "ring of fire" LED taillights. The SE V6 adds a rear spoiler, while the R/T takes the sporty look even further, adding a monochromatic exterior appearance with black-background headlights and R/T fender stripes, as well as a rear spoiler and dual chrome exhaust tips. For all trims, Dodge offers new Copperhead Pearl and Blue Streak Pearl exterior colors for 2012.

Despite its good looks, the Avenger faces an uphill battle in its competitive market class, which includes such vehicles as the Ford Fusion, the Hyundai Sonata, the Nissan Altima and the Toyota Camry, as well as the Kia Optima, the Honda Accord and the Chevy Malibu. That's tough competition, and some reviewers say that many of those vehicles do a better job than the Avenger in delivering performance, roominess and functionality. Still, the Avenger has carved out a stylish niche for itself that continues to appeal to buyers looking for something a little different. 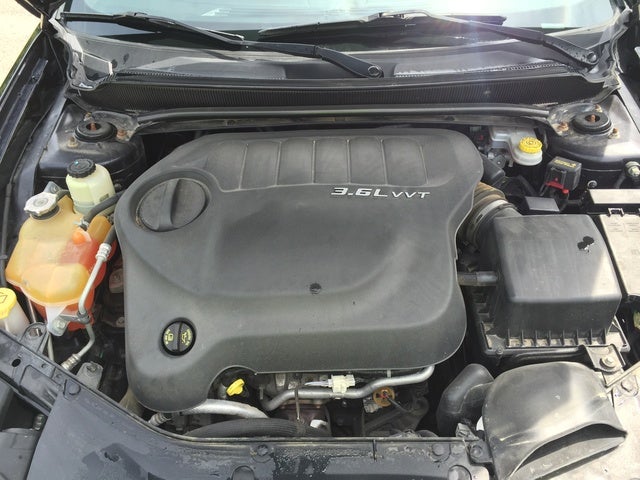 A 2.4-liter DOHC 4-cylinder engine, which drives the SE and SXT trims, provides base power for the Avenger. Featuring Variable Valve Timing, it produces 173 hp and 166 lb-ft of torque. It's paired with a 4-speed automatic transmission in the SE trim and links to 6-speed automatic with the AutoStick manual-shift feature in the SXT. Fuel economy numbers check in at 21/30 mpg with the 4-speed shifter and 21/31 with the 6-speed. According to reviewers, the engine provides adequate power for most around-town driving situations and maneuvers, though most recommend the V6 powerplant. However, a number of testers have commented on the 4-cylinder's quiet, vibration-free operation.

The SE V6, SXT Plus and R/T trims come equipped with a 3.5-liter Pentastar high-output V6, which was named one of the 10 best engines for 2011 by Ward's. Also featuring Variable Valve Timing, the V6 makes 283 hp and 260 lb-ft of torque. It mates to the 6-speed automatic transmission in all three trims, but only the SXT Plus and the R/T get the AutoStick manual-shift feature. The EPA estimates fuel economy numbers of 19/26 mpg for all three V6 trims. Reviewers note that those fuel economy numbers rank near the bottom of the class for V6-equipped midsize sedans, but they like its performance as well as its quiet operation.

In keeping with its sporty exterior design, the Avenger's suspension delivers a firmer ride than many of its competitors, but it's not overly harsh or uncomfortable. All Avenger trims sit on a 4-wheel independent suspension with MacPherson struts in front and a multilink configuration in the rear. In addition, all trims get front and rear stabilizer bars, and all except the R/T come with a 19mm anti-roll bar.

Dodge pushed the wheels out far out to the corners to increase the Avenger's track width, which helps it maintain good control and balance. It takes corners well, with minimal body lean, and for the most part remains firmly planted on the road. However, reviewers note that the ride and handling don't approach the performance-oriented nature of a true sports car.

Wind noise in the Avenger's cabin is minimal, even at highway speeds, but some reviewers find the cabin tight, especially in the rear seat, where 3 adults will likely find themselves pressed in shoulder-to-shoulder. The seats gets mixed reviews, with some testers finding them well-padded and supportive for longer trips, while others feel they lack support. Some critics note poor visibility out the back from the driver's seat.

Dodge's designers sought to minimize hard plastics and cheap materials in the Avenger's driver-oriented cabin, and for the most part they've succeeded. Most critics like the interior's premium feel, thanks to a redesign in 2011, which did away with many of the hard surfaces and loose-fitting pieces. A few cheap-feeling pieces remain there and there, however. On the positive side, the controls and gauges are easy to read and convenient to use, and overall the cabin feels quiet and comfortable.

Most negative comments focus on Avenger's interior space, especially the rear seat legroom, which remains tight and can feel cramped for adults. Some reviewers even describe the cabin as "snug" and point out that interior space isn't much more than a compact car's. However, legroom and headroom in the front matches that of competitive cars in the class.

Cloth upholstery and front bucket seats come standard in all trims except the R/T. The SE and SE V6 get manually adjustable seats, while the SXT and SXT Plus add an 8-way power-adjustable driver's seat. The SXT and SXT Plus also get a leather-wrapped steering wheel and shift knob. The R/T adds a perforated leather steering wheel, heated front seats and Z-striped cloth seats with leather bolsters. All trims get a 60/40-split rear seat with a pass-through.

The SXT adds automatic temperature control, temperature and compass gauges, a display screen and 2 additional speakers for the Uconnect system, while the SXT Plus also includes a 6.5-inch touchscreen, a DVD player and a 40GB hard drive. The R/T gets such unique interior features as an auto-dimming rear-view mirror and a 6-speaker, 276-watt Boston Acoustic sound system with a touchscreen entertainment center and a 30GB hard drive.

All Avenger trims come equipped with electronic stability control, traction control and 4-wheel antilock disc brakes. Six airbags and a theft deterrent system are among the other standard safety features.

While critics remain iffy on the Avenger, owners continue to express their enthusiasm for the vehicle. The exterior styling remains a major draw for owners, but they also like the Avenger's smooth ride, comfortable cabin and slightly out-of-the-ordinary nature, without crossing the line into sports-car territory. The seats sit fairly high, and the standard rack-and-pinion steering feels responsive, owners note. In addition, most say they're satisfied with the Avenger's performance and generally like its fuel economy numbers.

Some owners would like to see a little more headroom in the cabin, and a few report mechanical problems, but overall owners say the Avenger has a higher-quality, more refined feel than its competitors, and perhaps most importantly, they say it's fun to drive.

xjsjag I have owned my 2012 Dodge Avenger for about a year now and I have 29,000 miles on it. The V6 motor is great. It has enough power to get up and go while still getting good gas mileage on the hwy. The interior is comfy and spacious with plenty of leg room for the passenger in back. The trunk has plenty of room for all my luggage. With the rear seat folded down there is plenty of room for my two labs to lay down and enjoy the ride. Handling is great and gets even better with performance tires on the car. Before buying this car we tried the Chevy Cruz, Ford Fusion and a few others and this is by far the best in this category. I never thought of buying a Dodge before this, but now I will always consider them.

Users ranked 2012 Dodge Avenger against other cars which they drove/owned. Each ranking was based on 9 categories. Here is the summary of top rankings.

Have you driven a 2012 Dodge Avenger?
Rank This Car

Are Parts Transferable From Different Year

I have a 2012 dodge avenger. I am wondering if parts from another year will fit my car. like the speed sensors, and the module. and possibly what other parts are transferable from what year?

My 2012 dodge avenger se has started having problems. The etc light will start flashing and goes into limp mode. If I turn off the traction control it still feels like it's not at full power but I...

My Car Is Consuming Gas Too Fast What Should I Do?

My car is consuming gas too much what could be the problem? It was fine but all of a sudden it started doing that I changed the oil once but the new filter accidentally got some old oil inside of ...

I Just Got A 2012 Dodge Avenger And The Passenger Side Blows Freezing Cold ...

While driving my car will dye and the check engine light along with the lighting bolt in backwards parenthesis flashes but does not stay on. They check engine ight will go off and then come back on.