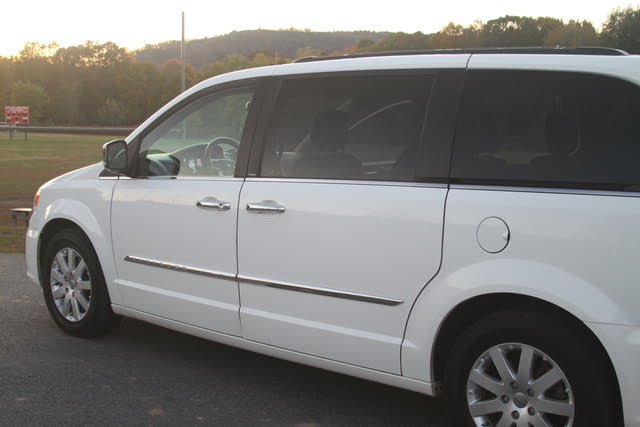 Even though it receives only minor updating for 2012, the Town & Country retains its status as Chrysler's upscale minivan, delivering a smooth ride, a comfortable interior and an expansive standard features list that beats just about anything else in its class.

While the Town & Country comes well-equipped for 2012, some reviewers say the minivan's performance and handling don't match the level of refinement offered by such competitive vehicles as the Toyota Sienna, the Nissan Quest and the Honda Odyssey.

If you're looking for a family minivan with numerous upscale amenities, such as easily configurable seating, leather upholstery and a standard DVD player, the Town & Country is hard to beat. But if performance and handling are more important to you, the Town & Country falls a little short when compared to some competitors. Numerous Town & Country owners report that they're overwhelmingly pleased with their vehicles, so it all comes down to what each individual buyer seeks from a minivan. If upscale features and a spacious, comfortable cabin are of paramount importance to you, then the Town & Country should fit your needs.

A perennial standout in an ever-diminishing automotive segment, the Chrysler Town & Country minivan rolls into 2012 with an air of uncertainty hovering around it. In 2011, Chrysler announced that it would discontinue building the Dodge Caravan, leaving the more upscale Town & Country as the automaker's only minivan, despite the fact that the Caravan was the better seller. Chrysler planned to replace the Caravan with a new crossover vehicle. A year later, in 2012, the company reversed itself, and now says it plans to retire the Town & Country instead, replacing it with a crossover, while continuing to build the Caravan. Although these plans could change again, it appears the Town & Country's days are numbered.

Nearing the end of its fifth generation, the Town & Country has always been the upscale companion vehicle to the Dodge Caravan and has consistently ranked near the top of its class, due to its long list of standard features and its versatile cabin, which appeals to owners with large families. Chrysler continues to offer the Town & Country at Touring, Touring-L and high-end Limited trim levels, and for 2012 makes leather upholstery and a second-row DVD system standard features on all trims. In addition, the automaker adds a new Sapphire Blue interior lighting scheme and a combination leather/wood steering wheel as standard equipment for the Limited. Three new exterior colors are available as well.

In creating the Town & Country's exterior design, Chrysler did its best to make a minivan look chic, and for the most part it succeeded. The Town & Country displays a clean, classic look, from its foglights, fully automatic headlights and bright chrome grille beneath the winged Chrysler badge up front, to its straight side lines and slightly tapering roof with roof rack, to the rear spoiler, power liftgate and LED taillights. Motoring down the road, the Town & Country has an almost stately stance, and it delivers a quiet, comfortable ride. Both inside and out, the Town & Country continues to assert itself as the luxury minivan of choice. Whether it will be doing so a few years from now remains to be seen. 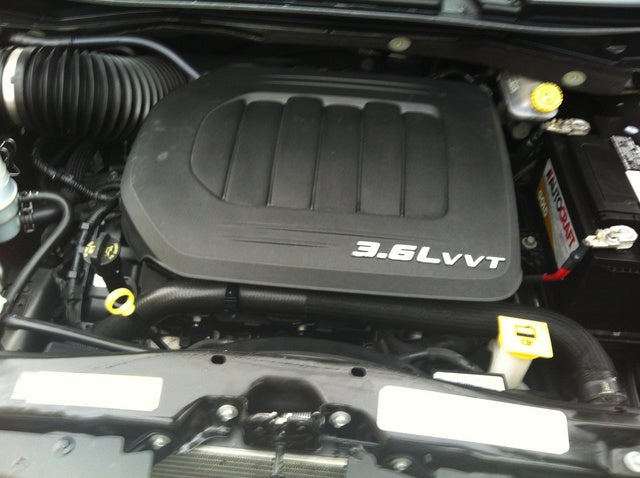 Power for all Town & Country trims comes from a 3.6-liter Pentastar V6 engine, introduced in 2011. It generates a best-in-class 283 hp and 260 lb-ft of torque, and links to a 6-speed automatic transmission, which comes standard. The transmission includes an AutoStick feature, which enables drivers to change gears manually by tapping the shift knob when it's positioned in a gated area. The V6 posts fuel economy numbers of 17/25 mpg. However, a fuel economizer mode helps the engine conserve fuel. When the driver pushes an ECON button in the center stack, the system adjusts engine timing and transmission shift points, so upshifts occur sooner and downshifts occur later, while the engine idles lower as well.

The V6 does a good job of moving the Town & Country forward from a full stop and performs well in most driving situations, although it can occasionally strain on hills when heavily loaded. Some reviewers also find the powerplant a bit rough and noisy for the class, noting that it's not quite as refined as the powerplants in some competitive vehicles, such as the Toyota Sienna, the Honda Odyssey and the Nissan Quest. The FlexFuel-capable Pentastar V6 runs on both regular and E85 fuel. The Town & Country has a towing capacity of 3,600 pounds when equipped with the optional trailer tow package.

In addition to upgrading the Town & Country's powerplant in 2011, Chrysler also improved the minivan's suspension, steering and noise insulation. Unchanged for 2012, the relatively new suspension setup features MacPherson struts in the front and a twist-beam rear-axle configuration with coil springs in the rear. The system provides a smooth, solid ride, although there's some body lean in corners. An optional load-leveling suspension, available in the Limited trim, adjusts ride height and distributes the weight of passengers and cargo to improve handling and stability.

The Town & Country rides on a front-wheel-drive platform. Chrysler does not offer all-wheel-drive as an option on the Town & Country, so prospective buyers seeking that feature will have to look at competitive vehicles, such as the Honda Odyssey and the Toyota Sienna.

Hydraulic power-assist rack-and-pinion steering comes standard on the Town & Country. It provides good response and feedback, though it can feel a little heavy at times. Some competitive minivans offer a lighter feel, as well as speed-sensitive steering, which appeals to some testers. Still, the updated steering system is a welcome improvement over the unit it replaced. All trims ride on 17-inch aluminum wheels, which represents a step up in size from some competitors. 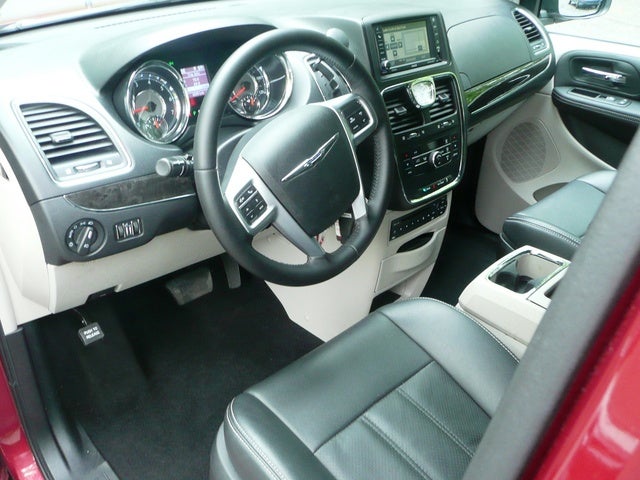 The Town & Country offers a large, well-equipped and comfortable cabin, with seating for 7 passengers in 3 rows. The Stow 'n Go seating system, which comes standard on all trims, enables owners to fold second-row bucket seats and the third-row bench seat into the floor. The Touring-L and Limited trims also offer optional removable second-row seats, as well as power folding and recline availability for the third row. The driver's seat features 8-way power adjustment, while the passenger seat features 4-way manual adjustment in the base Touring trim and 8-way power adjustment in the Touring-L and Limited trims. In addition, the front and second-row seats are heated in the Limited trim.

Further cementing the Town & Country's reputation as Chrysler's upscale minivan, all trims now come equipped with leather upholstery and a rear-seat DVD player as new standard features for 2012. The DVD system includes a second-row overhead 9-inch video screen and DVD player with wireless headphones and video remote controls, while the Limited adds a 9-inch screen for the third row as well (an option for the Touring-L).

All Town & Country trims include Chrysler's Uconnect media system, which incorporates AM/FM radio, a CD/DVD/MP3 player, Bluetooth, an audio input jack and a 40GB hard disk drive for song and media storage. It also includes a 6.5-inch touchscreen for displaying music information and images from a rear-view camera, which comes standard on all trims. For audio, the Touring and Touring-L trims receive a 6-speaker unit with SiriusXM satellite radio and voice-activated audio control, while the Limited gets a 9-speaker, 506-watt Infinity system. On the Limited trim, the Uconnect system also includes a Garmin GPS navigation system with voice activation. Options include a power sunroof and a dual-screen second-row DVD system for the Touring-L and Limited trims.

Storage abounds inside the Town & Country and includes a removable floor storage area as well as an overhead storage system with LED and Halo Glow lighting (which disappears if the sunroof is optioned). All the family’s gear should easily fit in the rear, which offers 33 cubic feet of storage behind the third row, 83.3 behind the second, and a cavernous maximum storage space of 143.8 cubic feet with the second and third rows folded.

The IIHS named the Town & Country minivan a Top Safety Pick for 2012, due to its overall top rating of Good in front, side impact and rollover crash tests. The NHTSA gave the Town & Country a safety rating of 4 out of 5 stars overall, which breaks down to 5 stars for protecting passengers during side crashes, and 4 stars for front and rollover crashes.

In all, Chrysler claims, the Town & Country comes equipped with 42 safety and security features, ranging from height-adjustable seatbacks and child safety locks to a panic alarm on the key fob and parking sensors, part of the rear-view camera system. Seven airbags also come standard, including dual front, front seat-mounted and side curtain airbags for all three rows. Stability control, traction control and antilock brakes with brake assist also come standard. The Touring-L and Limited trims add a blind-spot sensor.

The Town & Country's expansive list of standard features appeals to owners, many of whom have taken the time to test-drive and compare Chrysler's upscale minivan to competitive vehicles and found that the Town & Country comes out on top, thanks to its performance, comfort and value, as well as its standard feature list. Add in flexible seating for up to 7 passengers and expansive cargo space, and the Town & Country easily meets the needs of busy families. Owners say they also like the minivan's exterior styling and approve of its smooth ride, good handling and overall build quality. In fact, many current owners believe the Town & Country isn't getting enough praise and recognition for its many attributes and amenities.

Some owners find fault with the Town & Country's performance, while others say the menus on the GPS navigation screens can be confusing. Still, even the owners who point out those drawbacks are satisfied with the rest of the Town & Country's features. Some owners even note they get better fuel economy than the posted EPA numbers. In all, owners provide overwhelmingly positive comments about the 2012 Town & Country.

peterwyatt The 2012 T&C's GPS is positively dangerous, especially when it commands the driver to prepare to do a u-turn in the middle of a state highway (one way system). Have update to 2013 software, but problem still exists! Also the suspension rattles like a 1930's jalopy!! Just loved my 2001 Dodge caravan (owned for 12 years), but the 1012 T&C is no match and have given up on Chrysler who has developed a deaf ear!!!!!

oldvoyager Amongst all you experts, is there anyone who knows if it is possible to replace the engine with a crossover engine - battery / petrol ? If so how and at what cost ?

Users ranked 2012 Chrysler Town & Country against other cars which they drove/owned. Each ranking was based on 9 categories. Here is the summary of top rankings.

Have you driven a 2012 Chrysler Town & Country?
Rank This Car

my entire driver side tail light is out on my 2012 town and country. are the lights individually fused or do you think its the whole assembly

Seat heater quit working. Could it be just a fuse?

Overheats n when blower motor is on makes noise

2012 Town And Country Dies When Stopping

My 2012 Town & Country dies when I stop. Ran fine while driving until I go to slow down UNTIL they did a power train computer (not sure that's the correct wording) update yesterday, now I will not ...