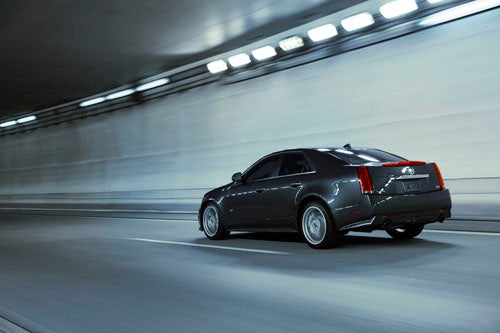 Hefty acceleration and better-than-adequate handling, as well as a reasonable price tag, luxurious standard appointments and a handsome profile have Cadillac’s 2012 CTS-V lineup poised to take on the German invasion.

For those who want Euro-style luxury and performance, look no further than Cadillac’s 2012 CTS-V Sedan and Wagon. These upper-echelon family and commuter cars offer pizzazz and comfort at a reasonable price, with looks and amenities to spare. This is a pair that deserves a look.

With looks, muscle, agility and luxury, the 2012 Cadillac CTS-V Sedan and Wagon take the family car to a whole new level without breaking the bank. This up-powered, 5-passenger midsize variant of the more sedate CTS series is available only with rear-wheel drive (RWD) but packs a sports-oriented suspension, potent Brembo brakes and a supercharged V8 engine that can be mated to either a stick shift or a less entertaining shiftable automatic transmission. Both the Sedan and Wagon are delivered chock full of standard luxury features, with the CTS-V Sedan also boasting 13.6 cubic feet of trunk space and the more practical Wagon hosting some 58 cubic feet of cargo area with the rear seats folded.

Each CTS-V version, Sedan and Wagon, is offered in a single trim. Both versions are intended for the upscale family or commuter, but unlike some of their rivals, neither will be mistaken for a sports car. With a curb weight of over 4,200 pounds for the Sedan and just under 4,400 pounds for the Wagon, segueing through switchbacks in the Sierra Nevadas will offer some spectacular views, but a hefty weight disadvantage cuts into overall driving excitement just a bit. Nonetheless, better-than-average handling is a staple of these screamers, due in large part to the fact that all CTS-V variants roll on standard performance tires.

A tad ponderous it may be, but the CTS-V in any variation will stand up well to its German-inspired competitors, especially in value. The BMW 3 Series sedan is sportier and marginally more posh, while the recently introduced Mercedes-Benz E63 AMG offers style, refinement, nimbleness and horsepower, as well as a wagon variation. Both rivals are worth a look, but the Caddy’s V-series trims have a distinct advantage in price that’ll be hard to ignore. Plus, of course, the fact that the CTS-V lineup was conceived in the U.S. (though admittedly tested at the famous Nurburgring track in Germany) will add considerably to its domestic appeal. 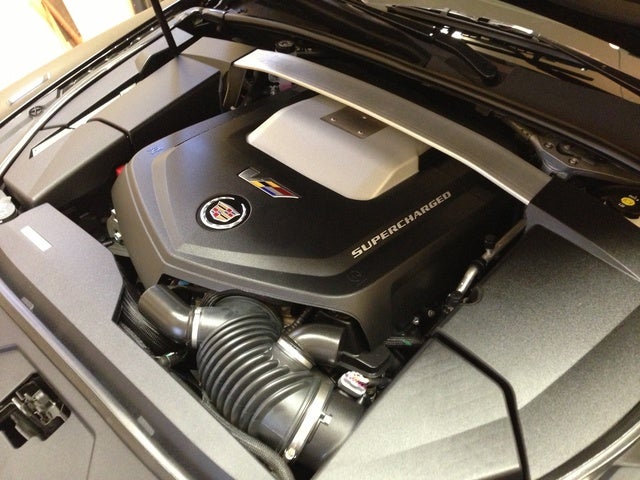 The standard, indeed the only, powertrain offered for both the 2012 CTS-V Sedan and the Wagon is a supercharged 6.2-liter V8 engine combined with either a 6-speed manual transmission or a 6-speed shiftable automatic. Equipping either variation with the automatic is a no-cost option, and no matter the transmission, look for the V8 to pound out 556 hp at 6,100 rpm and 551 lb-ft of torque at 3,800 rpm. Additionally, the 6-speed automatic is delivered with steering-wheel-mounted paddle shifters and features driver-selectable Sport and Touring modes that interact with both throttle and suspension components for the most desirable response to road and/or mood. With the 6-speed manual transmission, both the Sedan and the Wagon should get an estimated 16 mpg city/19 highway, while the automatic is estimated at 14/18 in either trim.

Nearly all reviewers are simply blown away by the sheer power of the CTS-V's supercharged V8. The word “ferocious” is freely bandied about in virtually all reviews of the car’s acceleration, with GM claiming 3.9 seconds from 0-60 for the Sedan with either the stick shift or the automatic. Independent tests, on the other hand, had an automatic-equipped sedan getting from 0 to 60 in 4.3 seconds, and the Wagon, again with the automatic, in 4.7 seconds; these are still impressive numbers for a family car. The 6-speed manual transmission is described by most reviewers as flawless, with a confident mesh and an unexpectedly light yet decisive clutch. With the Sport mode selected, the 6-speed automatic is claimed by many reviewers to be a tad quicker off the line than the stick, though there are those who say the shiftable automatic is neither the smoothest nor the most intuitive gearing available for everyday driving. Finally, reviewers note that the potent V8, no matter its management, emits an aggressive rumble at lower speeds that crescendos to a road-hungry, supercharged howl on acceleration.

Where the 2012 CTS-V shines over those of lesser ilk is in its confident ride and surprisingly adept handling characteristics. A 4-wheel independent suspension is bolstered by a short and long arm front end and multi-link rear suspension, as well as front and rear stabilizer bars. With the driver-selectable modes offered by the automatic transmission, the ride can be adjusted to either the more plush Touring level or the stiffer Sport mode. In any case, stick or automatic, the ride is described by most reviewers as firm but not jarring, though more than a few do note that rough roads will definitely be noticeable with the standard 19-inch polished alloy wheels, more so with the automatic in Sport mode.

Road-hugging standard performance tires give both the Sedan and Wagon a distinct agility advantage over their lesser siblings. Steering, though confident and precise, is claimed by virtually all reviewers to lack a certain something (like a lighter-weight frame) in comparison to most European rivals. The CTS-V’s hefty bulk will impart a bit of laziness to its handling traits on twisting, hilly roads, according to most reviews. However, agility is often in the eye of the beholder, and the CTS-V acquits itself quite adequately in the eyes of many. Standard 6-piston front and 4-piston rear Brembo brakes, furthermore, will ensure confident stops with absolutely no pedal glitches, according to reviewers.

Despite its not-quite-Euro agility, the CTS-V in either Sedan or Wagon configuration will doubtless leave drivers smiling when they unleash the V8 on the inevitable straightaway. Cadillac has traditionally been about posh and power over twists and turns, and its V-series is no exception, though it’s no slouch, either.

Given their pedigree, style and luxury abound in the 2012 CTS-V Sedan and Wagon. Both offer standard Alcantara leather upholstery with heated 8-way power-adjustable front bucket seats and a folding pass-through rear center armrest, as well as a leather steering wheel with mounted audio and cruise controls (and paddle-shifters with the 6-speed automatic), leather-wrapped shift knob and simulated carbon-fiber dash, door and center console accents. Standard amenities like remote power door locks, power windows and heated power-adjustable exterior mirrors are complemented by the likes of telescoping tilt-wheel steering, a rear-view camera, rear parking sensors and a universal remote garage door opener. Comfort features such as dual-zone automatic climate control and its accompanying Sun Sensor auto climate control and lighting adjustment are bolstered by such convenience goodies as an electrochromatic rear-view mirror and memory for two drivers' settings. Bluetooth-interfaced OnStar Directions and Connections navigation and communications service is added on to the standard hard-drive-based navigation system delivered with both CTS-V trims. Entertainment, meantime, is provided by a 300-watt audio system that stars an MP3-capable single-CD player and 10 Bose premium speakers. Additionally, XM satellite radio with NavTraffic, 5.1 surround sound, an auxiliary iPod audio input and a USB connection are all standard equipment. Finally, the CTS-V Wagon adds a standard roof rack and a power liftgate.

Though reviewers are generally positive about the 2012 CTS-V’s cabin accoutrements and ambiance, there are those who claim the rear seats are too cramped for adults (especially with the available sunroof) and that the standard navigation system can be a bit frustrating to figure out. Poor rearward visibility, less-than-overstuffed seat padding, a somewhat over-endowed center stack and questionable air-vent location all have reviewers scratching their heads as well. That said, reviewers are lavish in their praise of the CTS-V’s materials and interior build quality, with a number saying that it compares favorably to autos costing thousands more.

With its intent to be a luxury-oriented family car, the 2012 CTS-V loads up on the standard safety features. Four-wheel antilock brakes with electronic braking distribution and emergency braking assist, as well as traction control and StabiliTrak stability control are delivered with both the Sedan and the Wagon. Inside, look for front and rear head airbags, active front headrests and dual side-mounted airbags, along with OnStar Emergency Service, Airbag Deployment Notification and Stolen Vehicle Tracking. Then there is such added safety equipment as daytime running lights, front fog/driving lights, xenon high-intensity-discharge (HID) dusk-sensing headlights, a post-collision safety system and a remote antitheft alarm.

The 2012 CTS-V trims have not been tested by either the National Highway Safety Transportation Administration (NHTSA) or the Insurance Institute for Highway Safety (IIHS). Suffice to say that the lesser CTS trims achieve stellar scores from both agencies, with the IIHS awarding a Top Safety Pick to the 2011-2012 CTS lineup, from which the V-series is derived. 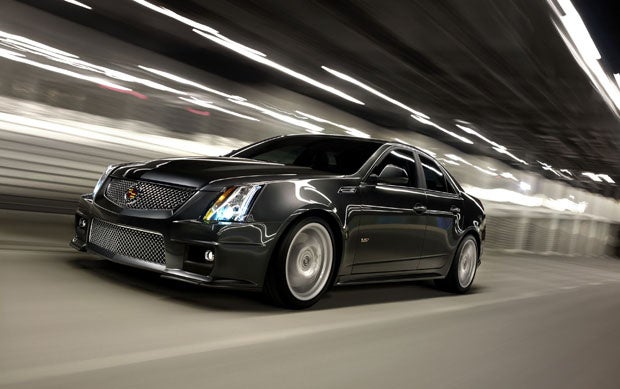 Owner complaints about the 2012 Cadillac CTS-V begin with its tepid mileage and end with a perceptible misalignment of the gas, brake and clutch pedals in trims carrying the 6-speed stick-shift. In between are issues with cramped rear seating—even in the wagon, as well as the low front bumper that may have a tendency to whack a curb or two, a few complaints about reliability and warranty terms and some problems figuring out the hard-drive-based navigation system.

Pure acceleration, however, not to mention a handsome visage and surprising agility, has the vast majority of owners heaping praise on this snazzy Caddy. Owners also laud its long list of standard features, quiet deportment and, finally, the fact that it’s available in a practical wagon version.

Have you driven a 2012 Cadillac CTS-V?
Rank This Car

I live in Greenwood Nova Scotia Canada and am always looking. If I find a vehicle that I like can I purchase it and have it shipped to my location. Thanks in Advance Rocky Hendrickson