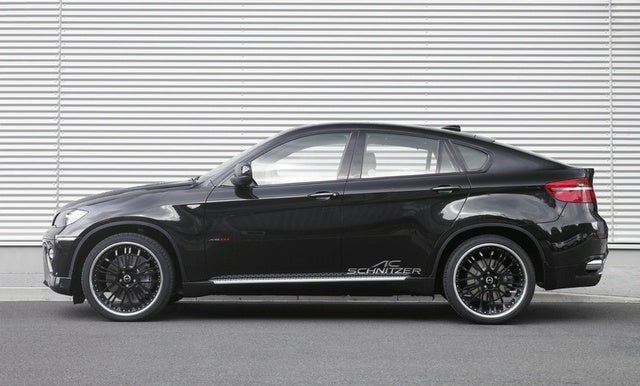 Just because it looks like a hatchback and has a hatchback’s cargo capacity, don’t call the 2012 BMW X6 a hatchback. Beemer has the entire automotive world believing that this four-passenger, four-door people-hauler is a midsize SUV that’s touted to fill the niche between the traditional SUV and the sport-oriented luxury coupe or sedan. Granted, this pseudo-ute, which comes in two trims, the base xDrive35i and the xDrive50i, is delivered with standard full-time intelligent all-wheel drive (AWD), but then Audi’s A3, for instance, a true hatchback, comes with standard AWD, as well. Few hatchbacks, however, pack turbocharged engines, and fewer still boast a sport-tuned suspension, not to mention a base MSRP of just under $59,000.

In any case, cargo area for Beemer’s Euro-ute is some 25.6 cubic feet behind the rear seats, and 59.7 cubic feet with the rear seatbacks folded. As is traditional with BMW’s high-end lineup, this hefty hatchback/SUV is loaded with good looks, cabin ambiance and creature comforts. Additionally, a braking regeneration system, introduced for 2011, keeps the alternator from overextending itself and combines with more efficient drivetrains to help the X6 pass by at least a few extra gas pumps.

As far as competition is concerned, the Acura ZDX comes closest to the X6, concept-wise. Any midsize luxury SUV, however, will likely compare to Beemer’s quasi-ute in price and beat it for utility, while BMW’s own 3 Series, 5 Series, and M sedans and coupes provide significantly more driving bang for the buck than does the M6.

Power for the 2012 X6 xDrive35i comes in the form of a 300-hp turbocharged inline 6-cylinder (I6) engine. Mated with a standard 8-speed shiftable automatic transmission that boasts a brake hill holder and descent control, the six-banger throws down 300 lb-ft of torque, good enough to haul 6,000 pounds of trailer with the proper equipment - something the average hatchback can rarely accomplish. Variable valve timing (VVT), meanwhile, keeps mileage a so-so 17 mpg city/25 highway using only premium unleaded.

The 2012 xDrive50i trim is delivered with a 4.4-liter twin-turbo V8 that combines with the 8-speed shiftable automatic for 400 hp and 450 lb-ft of torque. Also capable of towing a maximum of 6,000 pounds, the V8 again sports VVT, but mileage drops considerably to 14/20. Both trims, meantime, feature BMW’s intelligent AWD system (xDrive), skippered by a mechanical center differential and center and rear limited-slip differential, as well as its over-hyped Dynamic Traction Control system.

Options for the xDrive35i include the Premium package, which adds virtually all of the xDrive50i’s standard add-ons. Other options available to both trims include Active Steering and Adaptive Drive (both of which can also be had in the Sport Package), rear-seat DVD entertainment, BMW Apps (which can be used to access Facebook, Twitter, etc.), a rear-view camera with top-down view, head-up windshield information display, multi-contour and massaging seats and Active Cruise Control, which maintains vehicle spacing on the road despite increases and decreases in speed.

Option packages are varied, and some include a number of the above standalone options as well as goodies such as heated and cooled front and rear seats, heated steering wheel, satellite radio, upgraded 20-inch wheels, Nappa leather upholstery, four-zone climate control and a side-view camera. Online information services, auto-dimming headlights and a premium hi-fi system are also available in various packages.

Owners of the 2011 X6 give it poor marks for its cramped rear seat, but praise its over-the-top luxury features. Mileage could be improved, according to many owners, but both powerplants are lauded for superb response and acceleration. Some complicated controls and systems, not to mention a somewhat dated dashboard layout, have a few owners scratching their heads, though this sport-ute wannabe’s head-turning looks mitigate many of its perceived interior faults. Despite complaints from a few owners that the X6's AWD system is a bit skittish in the snow, all praise the added grip and agility the xDrive system brings to everyday driving. In any case, luxury is luxury, and Beemer is Beemer; virtually all owners of the X6 realize one equates with the other.

estimated cost of fuel injectors replacement on a 2012 bmw x6.

What Is Your Favorite Car Would You Kike To Drive?

Horrible service I went to see a car on Sunday and I liked it so I told the associates I would return the next day with a deposit in hand I show up and they were mid sale with another customer they ...