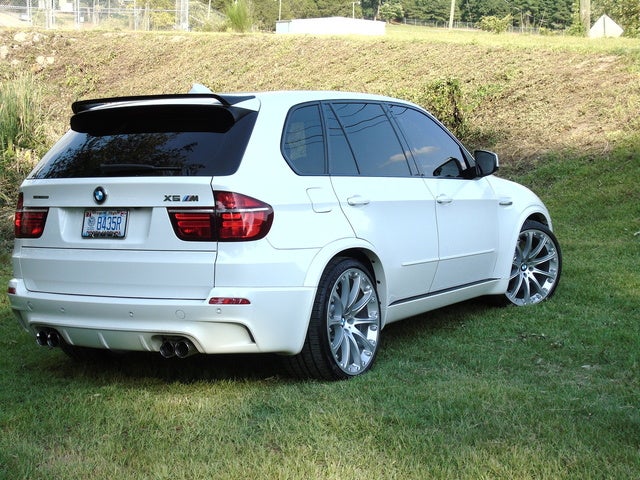 A hot twin-turbo V8, some nifty moves on twisty roads, scads of interior comfort and convenience accoutrements and standard all-wheel drive are just some of the reasons folks might covet the handsome 2012 BMW X5 M.

Tepid mileage, some confusing electronics elements, a bit of weight-induced laziness in tight cornering and a hefty base price will have some tire-kickers wondering what’s the point of the 2012 X5 M high-performance crossover utility vehicle?

Sir Edmund Hillary’s explanation “Because it is there” sums up the notion of a freakishly fast, surprisingly smooth, admirably nimble, luxuriously equipped crossover ute. BMW’s 2012 X5 M is a precision machine with marginal utility, but the fact that it exists is reason enough for some to make the most of its class-leading performance attributes.

Beemer has a screamer in its 2012 BMW X5 M. Essentially an X5 with an attitude, this 5-passenger crossover seems to have no redeeming social value, except, perhaps, for those who like to drive fast and live large. A turbocharged V8, sport-tuned suspension, standard performance tires in staggered sizes (wider rears), standard all-wheel drive and third-row delete would indicate that it’s not intended to tote the kids to the grandma’s on Sunday, but it might make for a fun commute back and forth to the office. A plethora of standard techno-features, as well as leather and chrome interior accents are all complemented by 75.2 cubic feet of cargo area with the rear seats down—said rear seats, in keeping with this crossover’s high-end nature, actually folding completely flat. Some new doodads for 2012, meantime, include a standard power liftgate and USB port, as well as an upgraded BMW app for iPhones.

The well-endowed X5 M comes in a single trim, modestly known as the Base, and is a product of BMW’s touted M division, known more for track records than trail expertise. Beemer’s hefty yet nimble performance crossover is, however, a freak in that the German automaker’s racing division has managed to take the oxymoron out of “performance crossover” to present just that. Able to make a top speed of 130 mph on a straightaway, the 2012 X5 M will also hold on to those wicked back-country loops and twists, though it may tend to be a bit ponderous on the tightest of turns simply because it weighs so darn much (5,368 pounds). Nevertheless, the Beemer takes top honors for both acceleration and maneuverability in the crossover class. True practicality and value? Well, that’s another matter.

In any case there exist a number of rival luxury performance crossovers out there, though none quite as punched-up as the X5 M. Porsche’s Cayenne Turbo is probably the closest competitor to Beemer’s mini-ute, and it’s a worthy adversary, except for the fact that it costs about $20,000 more. Possibly more sensible if somewhat less exciting competitors include the Range Rover Sport and Mercedes-Benz’s reworked ML63 AMG, both luxuriously endowed but with considerably less driving panache. For about half of what the X5 M costs, those in the market might want to consider Jeep’s Cherokee SRT8, a worthy competitor in both performance and agility. Face it, though, the BMW name has a certain cachet that Jeep may be hard-pressed to ever acquire.

The sole engine offering for the 2012 X5 M is a twin-turbocharged, direct-injected (DI) 4.4-liter V8. Paired with the 6-speed shiftable automatic transmission, this potent V8 throws down an incredible 555 hp at 6,000 rpm and 500 lb-ft of torque at 1,500 to 5,560 rpm. Despite a nod to economy with variable valve timing (VVT), gas mileage is an uninspiring 12 mpg city/17 highway and, adding insult to injury, premium unleaded is required for the twin-blower V8. One wonders if meager mileage concerns could be mitigated by a 6,000-pound towing capacity (with the proper equipment), though thoughts of a trailer behind a track-capable Beemer are, perhaps, a bit of a reach.

Nonetheless, this scalding ute’s standard 6-speed automatic is somewhat unique in its Adaptive Transmission Control feature. Driver-selectable modes, operated via steering-wheel-mounted paddle shifters, allow a choice between Drive, Sport or M Manual modes for a normal, sporty or workmanlike driving experience, respectively. Furthermore, the automatic sports a brake hill-holder and descent control, and the standard full-time all-wheel-drive system boasts a mechanical center differential, as well as a center and rear limited-slip differential. In traditional fashion, Beemer’s xDrive Intelligent AWD system allows a certain ratio of torque between the four wheels when cruising in normal conditions, with additional torque automatically shifted from the wheel(s) that slip to the ones that grip when things get dicey.

Reviewers routinely overachieve when groping for adequate descriptions of the 2012 X5 M’s awesome acceleration. Beemer’s claimed 0-60 time of 4.5 seconds is unheard of in a crossover SUV, yet virtually all tests confirm this outer-limits quickness. The 6-speed automatic transmission is described by reviewers as smooth and intuitive, though a few note that this flashy crossover might do better, economy-wise, with a dedicated manual transmission. It may also be worth noting, however, (and a number do) that those who can afford this pricy ute have far worthier things to worry about than gas mileage. Finally, a number of reviewers are impressed with the sporty note sounded by the turbocharged V8, yet there are those who find its turbo whine disconcerting and unrefined, especially at the X5 M’s price range.

Standard in the 2012 X5 M is an M-specific sport-tuned suspension predicated on a 4-wheel independent design, with a double-wishbone front end and multi-link, self-leveling rear air suspension. Stabilizer bars fore and aft complement all, and this spiffy ute rolls on 20-inch alloy wheels mounting run-flat performance tires. The ride, according to reviewers, is surprisingly compliant and comfortable. Bumps are well-damped despite the tendency of larger tires to magnify road imperfections, while swaying and wallowing are nowhere to be found over even the most rolling of terrain.

Steering is tight and precise, according to most reviews, with the performance tires and sport-oriented suspension, starring Adaptive Drive technology, making light work of intricate turns. The Adaptive Drive system interfaces Dynamic Drive acceleration modulation with Dynamic Damping Control and Active Roll Stability to ensure grip and stability in fast cornering, though a number of reviewers note that this crossover’s hefty weight gives it a definite ponderousness in the tightest turns. Most, however, claim that Beemer’s heady hauler demonstrates more the agility of a sedan than a ute.

Brakes, meantime, are powerful and true in the opinion of virtually all reviewers, with no pedal glitches. One test of the X5 M’s braking capabilities had it coming to a full stop from 60 mph in an impressively abrupt 116 feet. The standard brake drying feature, by the way, is found by reviewers to be a distinct advantage in wet weather.

Entertainment and techno-gizmos, finally, include a 600-watt audio system with an MP3-capable single-CD player and 16 speakers (including two subwoofers), a USB connection and a voice-activated hard-drive-based navigation system. All of this is complemented by Beemer’s iDrive electronics interface, as well as BMW Assist telecommunications and emergency service bolstered by Bluetooth hands-free technology and real-time traffic updates.

The Active Ventilated Seat Package, with ventilated, multi-contour front seating in perforated Merino leather and an active driver’s seat, is among several options for the edgy X5 M. There’s also the Premium Sound Package with 825 watts of enhanced premium sound, speed-adjustable volume, a 6-CD changer and Sirius/XM satellite radio, as well as the Cold Weather Package with a heated steering wheel, ski bag and heated rear seats. Finally, the Driver Assistance Package includes a head-up windshield display, a panoramic rear-view camera with Top View and separately available side-view for the lane-departure warning system, along with automatic high- and low-beam headlights.

Reviewers are generally favorable toward the 2012 X5 M’s cabin ambiance, high-end materials and quality workmanship, especially its lavish endowment of quality leather upholstery and accents. Most compliment this super-crossover’s thoughtful touches and comfy, welcoming seats, though a few complain that the doors are a tad small for seamless entry and egress. A number of reviewers also note that interior colors tend to be a bit bland, but that such a detail might be more a matter of taste than discrepancy. The iDrive electronics integration feature, however, remains frustrating to most reviewers, as does the inscrutable and user-challenging navigation system. A few reviews suggest that, though each of these features may be mastered in time, leaving the most commonly used controls separate from such distracting devices might be the best thing BMW could have done for this otherwise well-wrought interior.

The National Highway Traffic Safety Administration (NHTSA) has tested only the rollover aspect of the X5 M’s passive safety components and awards it a second-best 4-star rating. The Insurance Institute for Highway Safety (IIHS) gives the entire X5 lineup, including the performance-oriented M, its top rating of Good in front and side impact absorption, but did not test for roof strength. 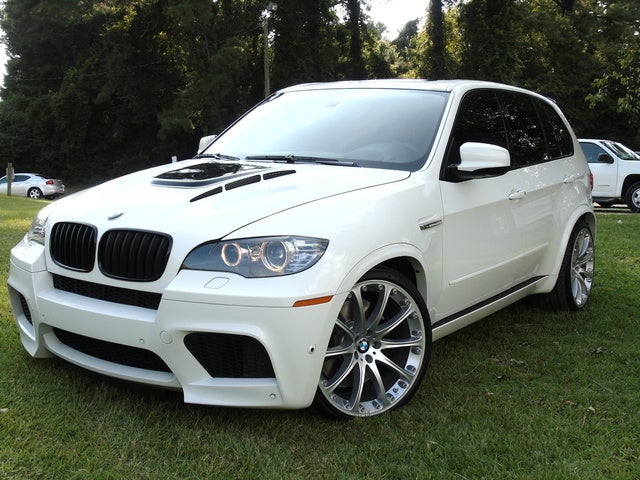 For many owners of the 2012 X5 M, gas mileage is a concern, though to be able to afford this high-end crossover in the first place intimates that this detail is not of overwhelming importance. Other glitches that frustrate owners include a somewhat dated cabin look, while continued confusion over iDrive and navigation programming is another area where owners feel much improvement is needed. A few owners complain, also, that this hefty crossover, despite the standard AWD, lacks a feel of confidence when driving on snow-covered roads, with the added inference that the standard performance tires might have to be replaced with all-season tires during the winter months. Finally, a number of owners mention that the X5 M, like many of Beemer’s performance-oriented autos, burns more oil than is normal, while others note that turbo-whine on heavy acceleration can be a bit annoying.

Performance, on the other hand, is what most owners expect out of Beemer’s scalding ute, and none are disappointed. The agility, power and precision of the 2012 X5 M all rate highly in the opinion of owners, while a surprising gentleness in ride comfort and, of course, the luxurious cabin appointments more than live up to this German automaker's top-shelf standards. Owners are quick to point out that this is a crossover designed for fun, with any semblance of utility far down on the list of its attractions.

I had a long block replacement on my Mx5 BMW 2012. when they replaced it should they have replaced the throttle body boot?

How Do I Access Previous Listings Back In November/October 2016