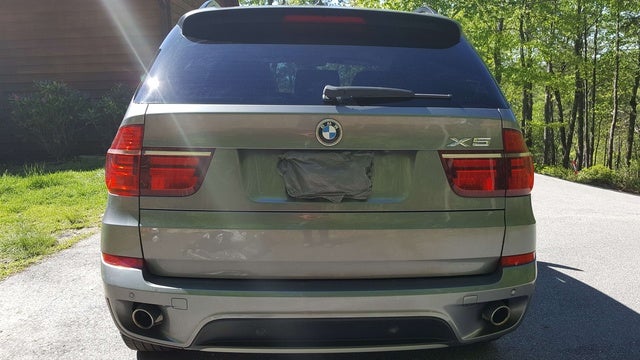 An all-new BMW M5 debuts for 2012, signifying a change of direction for the supercar while still maintaining a link to its past. Recognizing that fuel economy and efficiency have become important factors for even top-line performance-oriented luxury supercars, BMW has done away with the previous generation's naturally aspirated V10 engine, replacing it with a more powerful yet more efficient 4.4-liter V8 engine with twin turbochargers. In addition, the new M5 receives a redesigned chassis, better overall aerodynamics and updated interior features. Owners also can customize the M5 using nearly all the the options available for the automaker's 5 Series trims, on which the M5 is based.

In improving the M5's efficiency, BMW first sought to minimize its weight, although the vehicle still tips the scales at a rather hefty 4,288 pounds, an increase of almost 200 pounds over the previous generation. However, the new M5 (officially designated as the F10 in-house) sits on a 116.7-inch wheelbase, 3 inches longer than the previous generation's, so in a relative sense the automaker has managed to keep the M5's weight in check. Overall length measures 193.3 inches, up from 191.1 inches for the previous generation. To ensure the M5 remains as light on its feet as possible, the automaker utilized high-tensile and ultra-high-tensile steel, as well as aluminum, when crafting the body. BMW now says the M5's weight-to-power ratio is a rather acceptable 7 pounds per hp.

To power the M5, BMW borrowed the V8 engine that also drives the X5 M and X6 M sport-oriented crossover vehicles, then gave it a number of performance tweaks to create the most powerful engine ever for the M5, providing a perfect balance of high performance and efficiency, according to the automaker. The tweaked V8, officially known as the M TwinPower Turbo, pumps out an aggressive 560 hp at 6,000-7,000 rpm and maximum torque of 502 lb-ft at between 1,500 and 5,750 rpm. For the record, that's about 10 percent more horsepower than the previous V10 engine and about 30 percent more torque. With all that power, the M5 dashes from 0 to 62 mph in 4.4 seconds and can reach a speed of 124 mpg in 13 seconds. However, independent tests put the M5 in an even faster bracket, with a 0-to-60 time of just 3.7 seconds and a 12-second time to reach 120 mph. Top speed is electronically limited to 155 mph, although without the limitations the M5 can reach speeds of up to 190 mph.

To improve the engine's performance and efficiency, BMW reconfigured the layout of the intake and exhaust flows, essentially switching the two, and employs high-precision direct fuel injection. In addition, the automaker utilizes Valvetronic variable valve control technology, which helps boost torque and responsiveness as well as fuel efficiency. As a result, the engine delivers immediate throttle response yet still manages miles-per-gallon numbers into the low 20s, although some independent estimates put the numbers as high as 28.5 mpg.

To handle the high-torque, high-revving V8, BMW developed a new 7-speed double-clutch transmission, called the M DCT with Drivelogic System. It's designed to shift smoothly in either automatic or manual modes, with no clutch pedal required. This enables the driver to keep his foot on the accelerator pedal while shifting. The driver can also use steering-wheel-mounted paddle shifters to change gears manually. (BMW has confirmed that it will add a straight manual transmission in 2013.) A Low Speed Assistance mode makes it easier for the driver to feather power during stop-and-go traffic by tapping the accelerator pedal. In addition, an auto start-stop function switches off the engine when the vehicle stops moving to conserve fuel and starts it up again instantly when the driver releases the brake or presses the accelerator pedal.

Performance equipment for the rear-wheel-drive M5 includes an electronically controlled Active M Differential, a rear-axle limited-slip differential designed to perfectly channel power to provide optimal stability and traction while ensuring a sporty ride. The system constantly checks data provided by the vehicle's Dynamic Stability Control (DSC) system, as well as feedback from the accelerator pedal and wheels, and reacts within a fraction of a second, making incremental adjustments to the rear wheels to maximize traction on all types of road surfaces and in all types of driving conditions.

The racetrack-tested M5 sits on an M-Specific chassis designed with speed and agility in mind. For starters, BMW lowered the engine about three-quarters of an inch within the body frame and moved it back slightly to provide better front-to-back balance. Reinforced chassis mountings help distribute forces evenly around the body structure, while electro-hydraulic dampers make adjustments to the ride to fit the needs of the driver. In addition, M Servotronic Power Steering helps ensure precise handling. Ride settings include Comfort, Sport and Sport Plus modes, each delivering a progressively tighter feel with better feedback, depending on how much the driver wants to toss around the car. In all, drivers have a choice of 6 drive/ride settings, affecting both manual and transmission driving modes.

Outside, the new M5 receives some minor exterior styling updates, including a muscular hood with V-shaped lines that converge on the trademark double-kidney grille. Underneath the grille, three large, black-screened front air intakes provide visual flare while serving engine-cooling purposes. Side air intakes along the body behind the front wheel wells also give the M5 a sporty look while providing engine-cooling functions. Air-channeling flaps on the lower front sides also provide both visual appeal and functionality, since they help improve aerodynamics. Flared wheel wells and a subtle rear spoiler, as well as Adaptive Xenon headlights, LED daytime running lights and L-shaped LED taillights, add to the M5's cutting-edge look.

The interior builds on the distinctive BMW driver-oriented cabin layout that has proved so sporty yet functional through the years. M-specific interior features include customized M sports seats with Merino leather upholstery, an M steering wheel wrapped in Nappa leather, unique door sills with M5 lettering, an M driver's footrest and a unique Anthracite roof liner. The M-specific instrument cluster features black gauges with red needles and white illumination, and an iDrive control system featuring a 10.2-inch color display is centrally located in the front console. Driver-configurable drive buttons located on the steering wheel make it easy for the driver to change ride, chassis, shift and steering modes, as well as manage an optional head's-up display, which digitally displays graphics and symbols on the windshield within the driver's line of sight.

The front M seats feature additional bolstering along the side and shoulder areas, helping to keep the driver and passenger firmly planted during quick acceleration and lateral moves. Leather upholstery color choices include Black, Silverstone and Sakhir Orange. Power seat adjustment includes memory settings for height and angles of the seat and backrest. Safety features for the 2012 M5 include front and side airbags, as well as side-curtain head airbags for both rows of seats.

Users ranked 2012 BMW M5 against other cars which they drove/owned. Each ranking was based on 9 categories. Here is the summary of top rankings.