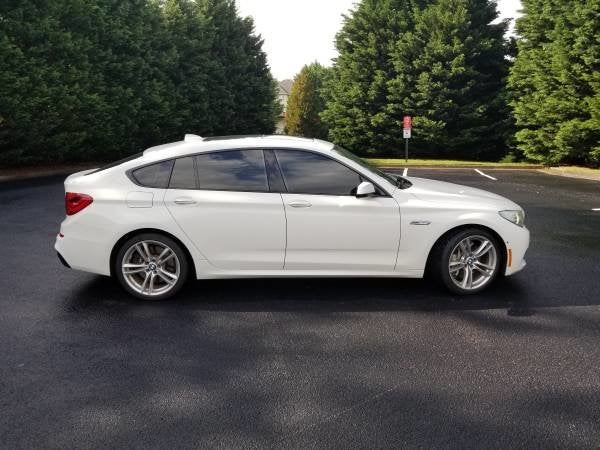 The 2012 BMW 5 Series Gran Turismo 4-door hatchback delivers a lot of car for the money, offering sporty performance, a well-equipped and functional interior, a long list of standard and optional features, and a unique dual-access tailgate that sets it apart from the crowd.

Owners and reviewers have mixed feelings about the 2012 Gran Turismo's exterior styling, with some finding it a bit of a hodgepodge, and its ride remains a little harsh when compared to the 5 Series sedans.

BMW had high hopes for the Gran Turismo when the automaker introduced its 4-door sport hatchback in 2010 as a replacement for the 5 Series wagon, but over the past few years sales have not met expectations, due partly to the fact that the Gran Turismo remains a hard vehicle to classify. Whether it ever catches on with buyers remains to be seen, but there's no doubt it offers a unique combination of power, comfort, styling and functionality that should appeal to certain buyers who seek something a little different than the typical sedan, wagon or crossover vehicle.

In the absence of a 5 Series wagon, the 2012 BMW 5 Series Gran Turismo continues to pick up the slack. Combining elements of a traditional luxury sedan and a sporty hatchback, the Gran Turismo provides up to 60 cubic feet of storage space and comes equipped with a unique dual-function tailgate that makes it easy to load all types of cargo. Add in a number of unique exterior design elements, an available 400-hp twin-turbocharged V8 engine, an 8-speed automatic transmission, available all-wheel drive (AWD) and a wide range of luxury features, and you have a grand touring car that's a little different than just about anything else on the lot.

Numerous critics have questioned the purpose of the Gran Turismo, since it doesn't fit into any particular category. Although it borrows its engines and some interior design elements from the 5 Series, it uses chassis and body components from the 7 Series. It's neither as functional as the BMW X5 crossover vehicle nor as fun to drive as a standard 5 Series sedan. Thanks to its elongated hood, it stretches 5.6 inches longer than the other 5 Series sedans (196.8 inches vs. 191.2) and sits 2 inches higher, resulting in a higher center of gravity, which affects handling characteristics. However, the Gran Turismo does offer smart functionality, a luxurious interior and a certain amount of pizzazz.

BMW continues to offer the Gran Turismo in 535i and 550i trim levels, with rear-wheel drive (RWD) and xDrive all-wheel drive (AWD) powertrain configurations available at each level. Based on the Italian grand touring sedans of the 1950s, which offered sport-oriented handling with plenty of room for luggage, the 2012 Gran Turismo incorporates a number of unique features, including its coupe-like lines and frameless side windows, which the automaker says is a first for a 4-door BMW vehicle. Out front, the distinctive twin-kidney grille rakes forward slightly, while halogen free-form headlights and daytime running lights with LED corona rings provide a sporty look. In addition, integrated front spoilers channel airflow and minimize lift.

Along the sides, BMW segments the windows into 3 sections for visual appeal, while the Hofmeister kink at the back corner of the rear windows carries on a traditional BMW styling cue. The roofline tapers to a typical fastback design, while horizontal lines across the trunk and wraparound L-shaped LED taillights finish off the rear. The 535i trims get dual round chrome exhaust tips, while the 550i trims receive rectangular-shaped dual chrome exhausts. An available M Sport package adds shadowline exterior trim, a number of aerodynamic enhancements and upgraded wheels.

The Gran Turismo's dual-access tailgate remains one of its most distinguishing features. It features a lower trunklid, which owners can open to stow smaller items, and also opens like a full SUV hatch, making it easy to load larger items. An acoustic partition separates the fully enclosed cargo area from the main cabin, ensuring a quiet ride for passengers and insulating them from cold or warm weather when the tailgate is open.

Treading water as it awaits some minor updating in 2013, the Gran Turismo receives no new features for 2012, other than the introduction of optional BMW Apps, which enable owners to access certain smartphone apps using BMW's Connected Drive interface and an in-car display screen. Competitors for the Gran Turismo include the new Audi A7, with its liftback body style, as well as the Porsche Panamera and the Aston Martin Rapide. More affordable 4-door hatchback options include the Honda Crosstour as well as the more traditional Nissan Murano crossover vehicle.

The 550i and 550i xDrive continue to come equipped with a beefy 4.4-liter V8 engine. Featuring TwinPower Turbo, piezo direct fuel injection and Double-VANOS variable valve timing, it pumps out 400 hp and 450 lb-ft of peak torque over a broad range from 1,700 to 4,500 rpm. That's good enough to drive the 550i to 60 mpg in just 5.3 seconds. The V8 also links to the 8-speed automatic or the optional 7-speed Sport Automatic and manages fuel economy numbers of 15/22 for both RWD and AWD trims. All Gran Turismos have an electronically limited top speed of 150 mph.

As much as any automaker in the world today, BMW has perfected the art of performance driving, and the Gran Turismo's 2 powerplants don't disappoint. Despite its hefty weight of 4,600 pounds, the Gran Turismo accelerates quickly, and the engines remain responsive to the whims of the driver. Both engines are relatively quiet, performing all the expected tasks during daily commutes with ease, and appropriately opening up on straightaways and highways for a sporty driving experience. On AWD trims, the xDrive system monitors such factors as wheel speed, steering angle and engine torque, and distributes power to the front and rear axles as necessary to ensure optional traction and stability.

As in previous years, the Gran Turismo rides on a double-wishbone multi-link aluminum front suspension with steel springs and a multi-link self-leveling suspension in the rear, which uses air pressure to ensure ride comfort, depending on road surfaces and vehicle load. The suspension also includes front and rear stabilizer bars, twin-tube gas-pressure shock absorbers and aluminum front and rear subframes. Speed-sensitive electric power steering provides good feedback at higher speeds and lightens up a little at lower speeds, thanks to a Servotronic variable assist feature. A standard electronic limited-slip differential also helps ensure optimal handling. Ventilated antilock disc brakes feature a regenerative braking system, which can sometimes result in an odd brake feel, according to testers.

Suspension options include Adaptive Drive with roll stabilization and Dynamic Damper Control, which provide greater resistance to body roll and enhance agility and stability. Owners can also add Integral Active Steering, which provides greater steering response at lower speeds and also steers the rear wheels up to 3 degrees in the opposite direction for optimal maneuverability in tight spaces. The 535i trims ride on 18-inch, double-spoke alloy wheels with run-flat all-season tires, while the 550i trims get 18-inch, star-spoke light-alloy wheels, also with run-flat tires. The M Sport Package adds 19-inch, V-spoke wheels on all trims. In addition, owners can opt for a variety of available 19- and 20-inch wheels, as well as performance tires.

The Gran Tourismo seats up to 5 passengers, although an optional Luxury Rear Seating Package makes 4-passenger seating the optimal configuration. The standard second-row, 3-passenger bench seat slides back and forth by almost 4 inches to optimize legroom or cargo space, and the seatback splits 40/20/40 and folds forward. In addition, the seatbacks recline by up to 40 degrees to ensure passenger comfort. The optional Luxury Rear Seating Package replaces the second-row bench seat with 2 power-adjustable heated and ventilated individual seats separated by a center console. In either configuration, the Gran Turismo's long wheelbase ensures plenty of front and rear-seat legroom. However, headroom might be tight in the rear seat for taller passengers, due to the sloping roofline. With the second row pushed all the way back, cargo space in the trunk checks in at 15.5 cubic feet, but with the rear seats pushed forward, cargo space increases to nearly 21 cubic feet. That jumps to 60 cubic feet with the rear seats folded down.

Up front, the driver sits a little higher than in the 5 Series sedan, thanks to the "semi-command" position, which places the driver 22.6 inches off the ground. This ensures good visibility and makes it easier for the driver to enter and exit the vehicle, according to the automaker. As in all BMWs, the dashboard angles slightly toward the driver, making it easy to view the instrument cluster, which features Black Panel gauges. Controls are within easy reach, and an available Heads-Up displays projects speed and other information on the windshield.

The Gran Turismo's other standard upscale features include a panoramic two-piece slide/tilt moonroof, push-button start, a leather-wrapped steering wheel with a power tilt/telescopic column and a 12-speaker, 205-watt audio system with a CD/MP3 player, HD radio, Bluetooth and a USB port. SiriusXM satellite radio remains a dealer-installed option. An auto-dimming rearview mirror, automatic climate control, ambient lighting, remote keyless entry and power windows and door locks are among the other standard features. The 550i trims also include a hard-drive-based navigation system and a rear-view camera. A number of options packages, including a Premium Package, a Convenience Package, a Cold Weather Package and a Premium Sound Package, add such features as a a power tailgate, a heated steering wheel, 4-zone climate control, a rear-seat entertainment system and an upgraded 16-speaker, 600-watt audio system.

Overall, owners like the Gran Turismo's ride and handling, as well as its acceleration, especially in Sport mode. Owners find the interior comfortable and well-designed, but some find fault with the layout of the dashboard, which they say could be more efficient. In addition, most owners like the Gran Turismo's exterior design, although they note that it doesn't appeal to everyone. Negative comments generally involve fuel economy and the plethora of options, which can be tricky to sort through, owners say. However, nearly all owners agree that the Gran Turismo offers a lot of car for the money and therefore consider it a good overall value.

Users ranked 2012 BMW 5 Series Gran Turismo against other cars which they drove/owned. Each ranking was based on 9 categories. Here is the summary of top rankings.

Have you driven a 2012 BMW 5 Series Gran Turismo?
Rank This Car

Finace From A Private Seller

I have just bought a BMW 530gt and it sais in the papers that car is equipped with navigation, but on the control display navigation isn't mentioned. I really need navigation so what can I do to in...