Some lesser performance figures in comparison to many rivals as well as an over-abundance of pricy options, some less-than-companionable instruments and controls, and a hefty initial cost dulls the luster of the agile 2012 V8 Vantage a bit.

For a decidedly competent combination of driving excitement, classy ambiance and practical journeying, few conveyances match the 2012 Aston Martin V8 Vantage lineup. Sure, it costs a lot, and Aston Martin could add a few optional doodads to its list of standard features, but for the well-heeled commuter or the thrill-seeker of means, this snazzy 2-passenger sports car will set a new standard for practicality and style.

Though not quite on the same plane as, say, a Lamborghini or a Ferrari, Aston Martin nevertheless presents, with its 2012 V8 Vantage, an altogether quite acceptable 2-passenger sports car. Ordinarily, when considering the typical performance automobile, vehicles that come immediately to mind are the sport coupe and sport convertible, both of which are offered in the V8 Vantage milieu. Three trims, the Base (though it’s hardly that) the N420 and the ultra-agile S are each available in Coupe and Roadster versions. The V8 Vantage lineup boasts the identical chassis as its elegant DB siblings, but there the resemblance ends, with the sportier Vantage tweaking suspension parts into a sleek and aggressive beast able to easily conquer all hairpin turns in its path. Both the Base and the N420 manage a knife-edge balance between ride compliance and adept handling, while the devilishly agile S, with its lighter wheels, more obese rear tires and beefed-up suspension components, will stiffen the ride considerably but can certainly entertain with some exhilarating rides down those ordinarily nerve-wracking mountain switchbacks. And this little gem isn’t half-bad to look at either, though those sleek lines will present their usual difficulties with rearward vision.

In any case, this heady sports star throws a goodly amount of bling at the well-heeled owner, including plenty of premium leather and genuine alloy trim pieces. There are, however, a number of items conspicuously absent from the list of standard equipment in this pricy 2-seater, and there lies a bit of the rub. Stuff like heated seats, over-the-top Bang & Olufsen audio, satellite radio and, depending on the trim, cruise control or Bluetooth technology are all expensive options. Minimal practicality, meanwhile, is encompassed by a 10.6-cubic-foot cargo area in the hatchback coupe variants, with the Roadsters, due to the considerable amount of space taken up by soft-top storage, able to tote some 5 cubic feet of cargo. Not much, to be sure, but better than many of its rivals.

Speaking of rivals, these include the Audi R8, Jaguar XKR, Mercedes-Benz SL-Class and the classic Porsche 911. It is claimed in a number of reviews that the V8 Vantage, though quick enough, can’t quite match the g-forces off the line its competitors provide. Where the Aston Martin’s most notable abilities lie, however, is in its combination of world-class performance, luxurious cabin comfort and everyday practicality. This is an automobile that isn’t completely out of place in the daily commute, yet still turns heads slaloming around Aspen…on well-plowed roads…or cruising the casinos in Monaco.

No matter where this sexy little sport shows up, getting there will be an exhilarating journey. 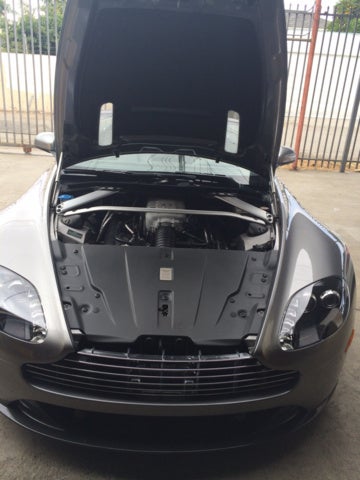 As its moniker implies, the 2012 V8 Vantage lineup is available only with a normally aspirated 4.7-liter V8 engine. The Base and N420 trims in both hatchback Coupe and Roadster versions are rated at an admirable 420 hp at 7,300 rpm and 346 lb-ft of torque at 5,000 rpm. The amped-up S Coupe and S Roadster, with their tweaked exhaust system bypass, add an extra 10 hp (430 hp) and an extra 15 lb-ft of torque (361 lb-ft), all at the above rpm. As well, the more sedate trims carry a standard 6-speed manual transmission or an available 6-speed auto-manual shifter with steering-wheel-mounted paddle shifters, while the V8 Vantage S Coupe and Roadster throw in a standard 7-speed auto-manual gearbox, again with steering-wheel-mounted paddles. All trims are equipped, meanwhile, with the brake hill-holder feature and a rear limited-slip differential, and all trims are, of course, rear-wheel-drive (RWD) only.

Tests of the V8 Vantage hatchback Coupe in 2011 show a 0-60 time of 4.7 seconds, while the 7-speed auto-manual S Coupe charged from 0-60 in 4.3 seconds. Some additional tweaks to the S versions have a few reviewers expecting 4 seconds flat or better in 2012. Most reviewers lament that this little gem can be beaten off the line by many of its competitors, but are quick to point out that there’s more to driving than smokin’ starts when the light turns green, and like a good middle relief pitcher, this crazy coupe and its convertible sibling are sneaky fast. The 6-speed stick shift is noted by a number of reviewers as admirably adept at cruising speeds, with confident throws and melodic gearing, though a few mention the fact that the hefty clutch tends to become a bit ponderous in heavy traffic. Finally, opinion is divided regarding the V8’s engine note at idle, with some claiming a sexy rumble and others a grating rasp. Virtually all reviewers agree, however, that on acceleration, the V8 turns loose a soul-pleasing roar, giving notice to all and sundry that this is no ordinary commuter car.

According to reviewers, Aston Martin’s 2012 V8 Vantage lineup offers one of the most exciting drives on the planet. The super-tweaked S trim, in both its hatchback Coupe and Roadster guises, puts many of its competitors to shame on twisty back roads and mountain-hugging switchbacks. The Base and N420, meanwhile, offer a custom blend of ride comfort and adept steering that ought to keep the commute from devolving into the proverbial rat race.

All V8 Vantage trims come with 19-inch painted alloy wheels, performance tires and wider rear wheels, with the N420 versions additionally boasting the Sports Pack with diamond-turned wheels, a revised rear roll bar and upgraded suspension components (optional for the base Coupe and Roadster). The S trim, moreover, boasts in both versions, an additional half-inch of width on each of the rear tires for even earthier purchase on the pavement. Ride comfort in each of the lower trims is noted as surprisingly compliant by most reviewers, while the S gives up a goodly portion of posh for significantly more engaged handling. All trims sport a 4-wheel independent suspension with double-wishbone front and rear setup, complemented by front and rear stabilizer bars. For 2012, the S goes one better with upgraded dampers, springs and bushings, as well as a more responsive steering rack that allows plenty of feedback from the road. Finally, the stability control mechanism has also been tweaked for the 2012 S versions, offering a bit more leeway and a well-founded confidence that the car won’t roll over in even the most acrobatic of high-speed cornering maneuvers.

In any case standard versions of the Base and N420 feature large and colorful brake calipers and discs to assure powerful, glitch-free stopping in all conditions, according to reviewers. In keeping with its higher performance integrals, the S trim this year sports 15-inch (385mm) front rotors for even more assured braking. Those aforementioned calipers, meanwhile, are available to all trims in a number of different hues that will add a bit more panache to an already head-turning exterior.

The N420 adds standard memory for up to 3 drivers' seat and mirror settings and 3 passengers' seat settings, as well as cruise control, Bluetooth hands-free communications technology and an electrochromatic rear-view mirror. The power-adjustable seats, however, drop from 8-way increments to 6-way. The sport-oriented S, meanwhile, boasts such additions as steering-wheel-mounted paddle shifters for the standard auto-manual transmission.

A number of reviewers, not to mention various owners, note that the otherwise well-endowed and appropriately upscale V8 Vantage cabin could, for its lofty price tag, include a number of options as standard equipment. The standard sport seats, nonetheless, are described by virtually all reviewers as eminently supportive and cross-country comfortable, while the plush hand-stitched leather upholstery adds immeasurably to the aesthetic cabin appeal of this top-shelf automobile. Alas, reviewers also caution that cabin storage is at a premium, with its small console and glovebox, while visibility, especially to the rear, is a bit compromised by the low roofline in both hatchback Coupes and Roadsters, though the latter become considerably less vision-challenged with the drop-top dropped. Altogether, opine a number of reviews, the V8 Vantage interior presents arguably the finest Aston Martin has to offer in its 2-seater lineup.

Neither the National Highway Traffic Safety Administration (NHTSA) nor the Insurance Institute for Highway Safety (IIHS) has any safety testing data for the 2012 V8 Vantage.

Referencing the somewhat limited number of customary standard features aboard the 2012 V8 Vantage, a number of owners complain that more than a few of its wallet-challenging optional items ought to be delivered as standard equipment. Owners also take issue with this nimble 2-seater’s tepid mileage figures, while perhaps counter-intuitively complaining about its lack of proper horsepower. Finally, an unseemly buffeting is noted by owners of the Roadster convertible trims, while others find the instrument-panel displays in both Coupe and Roadster versions a bit hard to read in sunlight.

On a more positive note, virtually all owners agree that Aston Martin’s V8-powered Vantage lineup offers a stunningly gorgeous visage, plenty of pep, other-worldly handling and, in the Base and N420, a tolerable, if not Bentley-like, ride. The well-appointed cabins also come in for a share of owner kudos, and its aggressive, some say near melodic, engine note is often a dealmaker among those who take this precision conveyance for a test drive.

Have you driven a 2012 Aston Martin V8 Vantage?
Rank This Car

Why Are The Vanity Mirrors So Terrible?