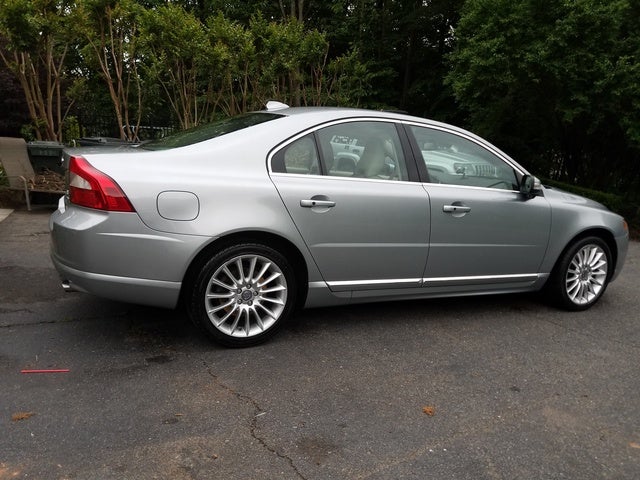 The 2011 Volvo S80 follows other models in the Swedish automaker's lineup by slimming down its engine choices in favor of adding more options. That means that there is no V8 this year for the full-size luxury sedan, but a host of features for those looking for a smart interior in a sedate package.

Two engines are now available: the T6, which is available with all-wheel drive, and the 3.2 I6. The T6 generates about 300 horsepower and 325 lb-ft of torque, for gains of 20 and 30 over the 2010 Volvo S80 respectively. Volvo is focusing on the increased torque numbers thanks to the turbocharger's increased airflow, which it says provides similar oomph to the V8 of yore.

The 3.2-liter straight six-cylinder engine is a bit less powerful, offering 240 horsepower in states requiring ULEV compliance or 230 in those with PZEV requirements. Both engine packages offer a combined rating of 21-22 miles per gallon.

Option packages have been slimmed down as well, with the Executive package no longer available. Bright spots include the availability of xenon gas headlights with active bending, meaning they turn with the steering wheel, a standalone option this year. The S80's other safety features have helped it garner a Top Safety Pick from the Insurance Institute for Highway Safety, notably an optional Technology package that includes collision warnings with automatic braking, distance and lane departure warnings, as well as adaptive cruise control.

The interior is refined without seeming opulent, according to some reviewers. An available Inscription package pushes that up a notch with improved leather seats, wood steering wheel and inlays, as well as a leather armrest in the center and ventilation for the front passenger and driver.

Speedwise, the 2011 Volvo S80 won't win any drag races: the T6 clocks in at 6.3 seconds from 0 to 60, and the 3.2 model takes a bit longer. The wheel's handling, whether walnut-wrapped or otherwise, is likely to be a bit loose and floaty. That, along with some of the most comfortable seats in the class, according to automotive journalists, make it a good fit for highway cruising.

The S80's stereo has been upgraded for 2011, with past reviewers noting that it sounded a bit off for passengers in the rear. The car does get high marks for its intuitive center console, which makes it easy to adjust climate, stereo, and other needs, although the navigation system comes with a few headaches thanks to a joystick input.

For the exterior, the 2011 model of the S80 looks as it has in previous years, with the sloping sides masking the same Volvo box with a bit of curve around the fenders. But owners are likely more interested in its safety features, pleasant ride, and cargo area. Expect about 15 cubic feet of storage with the seats up; more importantly, it's easier to access than some other cars in the class.

Seller Will Not Respond

What to do if car is listed for sale, but after repeated msg. sent..no reply from seller? Private seller Gonzalo. Snyder, TX