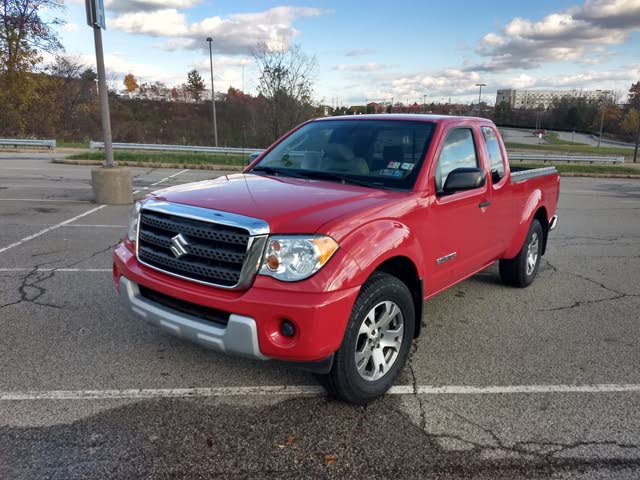 Looking for a Used Equator in your area?

The 2011 Suzuki Equator, as did the 2009 and 2010 versions before it, helps bring together the carmaker’s catalogue of big-girl and big-boy toys. Literally. The Suzuki enthusiast, if so inclined, can cart his Suzuki ATV or his Suzuki jet ski or even his Suzuki motorcycle around either in or behind the Equator.

Then again, the Equator, particularly in off-roading RMZ-4 trim, might be enough of a toy itself to satisfy many.

The Suzuki Equator remains, as it has from the start, based on the Nissan Frontier. That, professional reviewers are quick to note, is a good thing. The Frontier has long been a popular choice in the midsize pickup truck market and has likewise graded out well on reviewers’ report cards.

The 2011 Suzuki Equator follows suit. The experts aren’t sold on all aspects of the Equator, to be sure. They generally find it best fit for weekend truck warriors and don’t recommend it as a commuter vehicle, in part because of a ride that can be a little rough. They suggest stepping up from the Base trim, too.

But they also find plenty to praise.

For starters, the Equator carries Suzuki’s 7-year/100,000-mile powertrain warranty. That impressive promise comes with a caveat, though: Warranty work must be done at Suzuki dealerships, and there are not a ton of them out there, which means it can at times be difficult to find one. Reviewers like the tie-downs in the cargo bed and the general toughness and build quality of the Equator.

Suzuki sends the truck out in Base, Comfort, Premium, RMZ-4 and Sport trims, with a couple of engine and cab (Extended or Crew), options. The lower trims come standard with the base 2.5-liter, 4-cylinder engine, which puts out 152 hp and 171 lb-ft of torque and is mated to either a 5-speed manual or 5-speed automatic transmission. Gas mileage estimates are 19 mpg city/23 highway with the manual transmission and 17/22 with the automatic.

Set up with the V6 and properly equipped, the 2011 Suzuki Equator is rated to tow 6,500 pounds. The Equator earns its truck props for its towing capabilities as well as its off-road work in the RMZ-4 trim. Reviewers praise the RMZ-4 especially with its skid plates, heavy-duty axles, off-road tires, and hill descent and hold controls, among other features.

The Base trim, in contrast, is truly that, and some experts feel that the Premium setup is more likely to serve as the bottom line for most buyers. The Base model has bucket seats and an interior center console, but neither air conditioning nor a sound system comes standard.

The Premium gets an upgrade in its cloth upholstery, full power accessories, keyless entry and 16-inch alloy wheels. The RMZ-4 receives further upholstery upgrades and a driver’s seat with height and lumbar adjustment to go along with its other features.

All 2011 Suzuki Equators get antilock disc brakes, front side airbags and full-length side curtain airbags. Stability control became standard with the Sport and V6 Equators starting in 2010. It is not available with 4-cylinder versions, however.

What's your take on the 2011 Suzuki Equator?

Have you driven a 2011 Suzuki Equator?
Rank This Car

Looking for a Used Equator in your area?

How Do I Unbuckle The Safety Straps On The Bed Extender?

Page 4-15 of the owner's manual shows how to buckle the safety straps on the bed extender, but then says nothing about how to unbuckle them. I can't move the extender back into position or even shu...