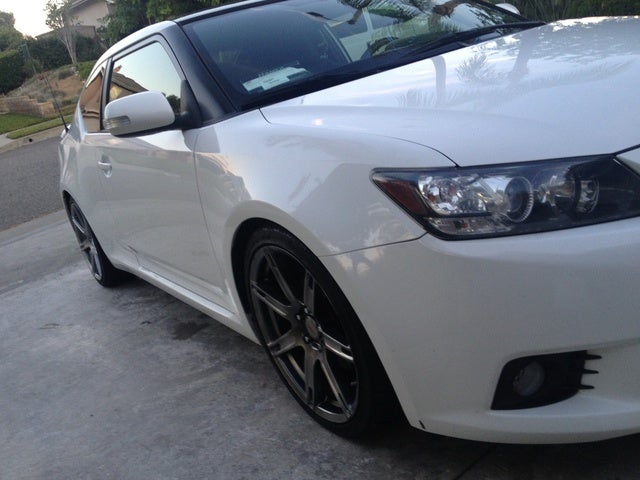 The 2011 Scion tC received the model's first redesign since it was introduced in 2004, and while some buyers may not recognize too many differences from the outside, its powertrain upgrades and other changes reflect a significant shift for Toyota's youth brand.

2004-2010 tCs, after all, are surprisingly some of the few Scion models that actually sell to younger buyers. Scion recognized this and responded to concerns about the car's lack of sportiness compared to the sleek looks of the first-generation model. In 2011, however, the changes start with the skin.

The front is more angular, with an aggressive front fascia that offers a strong three-piece grille section and a nose that wouldn't look out of place on a Kia Forte Koup. Add a hatchback-like design aft of the doors, and the 2011 Scion tC looks demonstrably different, especially with a lower, wider track.

Combine that with a new engine, and the new car should get some attention. Rather than a somewhat anemic 161-hp four-cylinder engine, the new 2011 Scion tC comes with a larger I4 that puts 180 hp to the wheels, mated to either a six-speed manual or a six-speed automatic transmission. 0-60 times have dropped by more than half a second from the outgoing model's with either transmission.

Reviewers argue that the new automatic transmission is one of the better ones in the compact class, shifting gears quickly during spirited driving. Mileage has improved over previous models' as well, with a 23/31 mpg city/highway split according to the EPA.

Although it's a front-wheel-drive car, the 2011 Scion tC has less tendency to understeer in tight curves, thanks to an updated suspension with thicker stabilizer bars. Low-profile tires also help the cause. While the driver gets a squared-off steering wheel for clearance, each of these changes comes with one significant downside: The ride can feel rough at times, even on highways, according to early reviews.

Significantly for some prospective buyers, the 2011 Scion tC is no longer a class leader in interior fit and finish. While much work was done to improve handling and power off the line, the plastics and the stereo seem to be a better fit for a less-expensive car pre-modded by a young buyer. On the other hand, the audio system was specifically designed to incorporate an MP3 player to push tunes through an eight-speaker system.

Standard interior features include cruise control, power windows and door locks, and a panoramic sunroof. Rear seat passengers can recline their seats for more room, or owners can take advantage of the hatchback design and 60/40 split to stow a maximum of 34.5 cubic feet of gear.

Safety features are good for the class and include an electronic stability system, antilock brakes, and eight airbags: front airbags for the driver and front passenger, side impact and knee-level airbags for the front row, and side curtain airbags for the entire cabin.

The 2011 Scion tC seems to answer many of the complaints that younger owners had when test-driving previous models, but those looking for the high interior quality and smooth ride of the 2010 and earlier models may want to check competitors like the Kia Forte and Honda Civic as well.

Users ranked 2011 Scion tC against other cars which they drove/owned. Each ranking was based on 9 categories. Here is the summary of top rankings.

I Want To Cancel My Listing. How Do I Do It?

Can I lookup a car buy vin number

What Size And Type Of Tire Should I Have For My Car. I'm Looking To Get New...

i wired them directly into the relay for the headlights, they worked for about 3 months and then my headlights went out