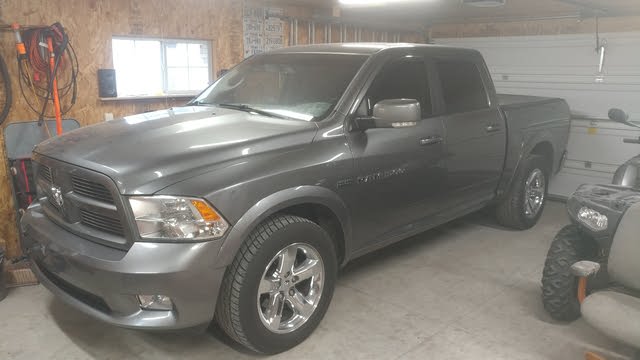 Flawless it’s not, but the Ram 1500 has improved immeasurably in the past two years. Award-winning and eminently competitive in a fiercely contested market, Dodge’s latest variation of its venerable full-size pickup, now produced by the new Ram brand, does nothing to hurt the automaker’s rising star. Watch out, Ford and GM, for the 2011 Ram 1500!

Chrysler/Dodge finally seems to get it. After a number of boneheaded corporate decisions, not to mention the economic disaster of ’08/’09 that left the automaker flirting with insolvency, Dodge got it right with the 2011 Ram 1500 pickup. Actually, a total redesign in 2009 began the process, but this award-winning hauler remains essentially unchanged from last year except for a few tweaks to some of the trim-specific details. Oh, and this brash pickup is now known solely as the Ram, not the Dodge Ram. Alas, old habits die hard, and this full-size truck is still listed as the “Dodge Ram 1500” almost everywhere. Nevertheless, the junior member of what was formerly known as the Big Three has a heavy hauler that it can be proud of, a truck that may someday challenge the mighty Ford F-150 for market supremacy.

Available in four trim levels, the base ST, midlevel SLT, trail-oriented Sport and top-shelf Laramie, the Ram lineup comes with standard rear-wheel drive (RWD), but all trims can be delivered with part-time, shift-on-the-fly four-wheel drive (4WD). All trims except the Laramie are available in a three-passenger Regular Cab version, the six-passenger Quad Cab version or the roomy Crew Cab configuration, also seating six. The Laramie is offered only in Quad or Crew Cab variations. Regular Cab trims carry either a standard 6.4-foot bed or an 8.2-foot bed, while Quad Cab versions sport only the 6.4-foot bed. Crew Cab Ram 1500s, meanwhile, mount a stunted 5.7-foot bed, but lack of hauling space is made up for by hefty rear-passenger legroom. A 3.55:1 axle ratio is standard across the lineup, with 3.92:1 or 3.21:1 axle ratios available as options, depending on towing needs and mileage concerns. With various options packages, the SLT and above trim levels can be transformed into the Quad and Crew Cab Outdoorsman, Big Horn, and, in Texas, the Lonestar edition, while the higher Regular Cab Ram 1500 trims can be upgraded to the Express or Tradesman subtrims.

A tepid V6 engine that’s standard equipment in the base ST is rapidly left in the dust by two powerful V8s, one the vaunted Hemi, that are available across the lineup. Indeed, the 5.7-liter Hemi is standard for the Ram Sport and is touted to tow over 10,200 pounds with the proper equipment. Much-ballyhooed rear coil springs complement the multilink rear end in all Ram trims for a ride that’s universally described as almost car-like. Heady praise indeed.

Traditionally, Ford’s F-150 leads the march of the full-size pickups, with Chevy’s Silverado and Jimmy’s Sierra keeping in step just behind. Even the Toyota Tundra has made surprising inroads into the U.S. truck market, almost burying the poor Ram a few years ago. The parade route has changed, however, and the well-wrought 2011 Ram 1500 has the pedigree to make doubters sit up and take notice.

Standard power for the SLT trim level and the Laramie as well as all ST 4WD trims and RWD Crew Cab trims is a 4.7-liter Flex Fuel (ethanol-capable) V8 engine that combines with a 5-speed automatic transmission for 310 hp at 5,650 rpm and 330 lb-ft of torque at 3,950 rpm. This potent powerplant provides some 7,650 pounds of towing capacity with the proper equipment, and mileage is in the 14/19 range with RWD, 13/18 with 4WD.

Reviewers are merciless on the Ram 1500’s V6 powerplant, with the kindest describing it as underpowered and inefficient. The two V8 engines, however, are noted by the majority of reviews as having more than adequate acceleration, with the Hemi, of course, a superstar off the line. One test of a 4WD-equipped Hemi V8 had it sprinting from 0-60 in 7.2 seconds, which isn’t bad for a pickup. Several reviewers, alas, question the wisdom of retaining the 5-speed transmissions accompanying both V8 engines, with several pointing out the advantages in both power and fuel economy of a 6-speed version. A number of reviewers, however, point out that an available 3.92:1 axle ratio (in place of the standard 3.55:1) goes a long way toward mitigating the 5-speed’s feeble towing power.

With its unique and well-received rear coil-spring suspension system complementing the multi-link rear end, virtually all reviews of the 2011 Ram 1500 rave about its nearly carlike ride. Gone are the frustrating rear-wheel jitters and skitters common to empty pickups, with the result that the Ram now boasts what nearly all reviews call “best-in-class” ride comfort, with only minor compromises to payload capacity. Sure, with some excess body lean in corners, a bit of jiggle on rough pavement and a somewhat ponderous steering feel, this full-size pickup will never be considered agile, but, hey, it’s a truck!

The base ST and mid-level SLT trims sport standard 17-inch steel and alloy wheels, respectively, with the Sport and Laramie each delivered with 20-inch alloy wheels. Reviewers note a tendency for those trims equipped with 20-inch wheels to wander a bit on the highway, with the result being an overabundance of steering correction. Braking, meanwhile, is described as powerful and true, with a bit of noseplow but otherwise no surprises, even in emergency stopping situations.

Overall, the new Ram 1500 draws laudable reviews for its surprisingly compliant ride and improved cabin serenity. This is a truck that can be driven for business or pleasure with equal aplomb and has an eye toward occupant comfort when hauling and towing.

Once Spartan and uninspired, the Ram 1500 cabin is now, if not palatial, at least comfortable and more occupant-friendly. Standard amenities in the base ST trim level, for instance, include vinyl upholstery, tilt-wheel steering and air conditioning, with entertainment via a single-CD player with auxiliary MP3 input and six speakers in all cab configurations. Pre-wiring for cell phone service is also part of the ST’s improved cabin ambiance, while six-passenger Quad and Crew Cab variations factor standard power door locks, windows and heated power mirrors into the equation. On top of all this, the SLT trim level throws in standard cloth upholstery, front bucket seats, remote power door locks, cruise control and a trip computer, with Sirius satellite radio adding to the entertainment offerings.

Reviewers can’t say enough about the 2011 Ram 1500’s new-look cabin. In front, gauges are described as large and eminently readable, controls are well marked and easily accessible, and seats are wide and supportive. Quad Cab and Crew Cab trims, however, are noted by a number of reviewers to be noticeably less well-endowed in the rear seating areas. More hard plastics abound in these nether regions, and the Quad Cab variations are significantly short on legroom, with a high step-in and smallish rear doors (thankfully, front-opening) making entry and exit a challenge without the optional side-steps. Cabin storage, meanwhile, is lauded by nearly all reviewers, even in the Regular Cab versions, with the optional RamBox bed-mounted storage bins complementing all the various cabin cubbies, pockets and bins quite nicely.

Complementing the 2011 Ram 1500’s hefty size are such standard safety items as four-wheel disc antilock brakes (ABS) with electronic brakeforce distribution and emergency braking assist, as well as the traditional traction and stability control. Occupant protection includes dual front side-mounted airbags as well as front and, in Quad and Crew Cab versions, rear head airbags. Further standard safety equipment in the SLT and above includes dusk-sensing headlights, while the Sport and Laramie boast standard front fog/driving lights and turn-signal-integrated mirrors, both of which are available with the ST and SLT trim levels. A standard active antitheft alarm system comes with the Laramie’s remote engine start feature and is available for the SLT and Sport trims. Finally, an integrated trailer brake control is optional across the lineup.

Though pickups are often ignored by government and insurance testing agencies, the 2010 Ram 1500 lineup got five-star ratings for front driver and passenger protection from the National Highway Traffic Safety Administration (NHTSA). Additionally, the NHTSA awarded the Ram 1500 four stars for RWD rollover protection and three stars for 4WD rollover protection. The 2011 versions, meantime, garner the highest rating of Good from the Insurance Institute for Highway Safety (IIHS) in front impact testing, but only its second-lowest rating of Marginal in side-impact and roof-strength tests.

As is common with owners of big vehicles mounting big engines, gas mileage is thought either tolerably good or abysmal. In the case of the 2011 Ram 1500, fuel efficiency is regarded by most owners as okay, but certainly worthy of improvement. Several owners also question the Hemi V8’s need for 89-octane gasoline, while many are well aware that driving habits, payload needs and towing frequency all contribute to greater or lesser engine efficiency. The base V6 engine is panned by virtually all owners as underperforming and gas-hungry, with some owners lamenting the fact that no diesel option is available in the Ram 1500. A few rattles and squeaks lead several owners to question build quality, while Dodge’s traditionally weak reliability leaves many owners with a “wait-and-see” mindset while living for the moment and enjoying their brand-new pickup.

On the positive side, the 2011 Ram 1500’s impressive interior improvements are a definite hit with owners, as is its bold and beautiful exterior. The vastly improved suspension of the next-gen Ram 1500 lineup has owners praising its ride quality and impressed that towing and hauling abilities continue to be strong even with the tamed rear suspension system. Cab storage capabilities, complemented by the available RamBox bed storage bins, draw kudos from a number of owners, while the availability of V8 power and performance gives owners reason to celebrate the Ram 1500’s considerable towing abilities.

Larry1939 Making excuses to drive it every day. Tows with little or no effort to the Hemi. Very comfy to ride and drive. Gas mileage is 16-20 which to me is fine as there is never a lack of power especially when you can blow by a Ford or Chevy with ease.

I have a 2011 1500 and its been driving me crazy for almost a year! I had a new fuel pump put in because one place insisted it was it! I said my fuel pump was replaced 3 years ago! Well when i pic...

My truck was having intermittent starting issues ( it would just crank and not start) now it won’t start at all. It has progressively gotten worse, now it will just click sometimes and other times ...

My check engine light and Traction stability light would remain on while driving. I hooked up a diagnostic tool and got a P0344 code and replaced the camshaft position sensor. However the engine ligh...