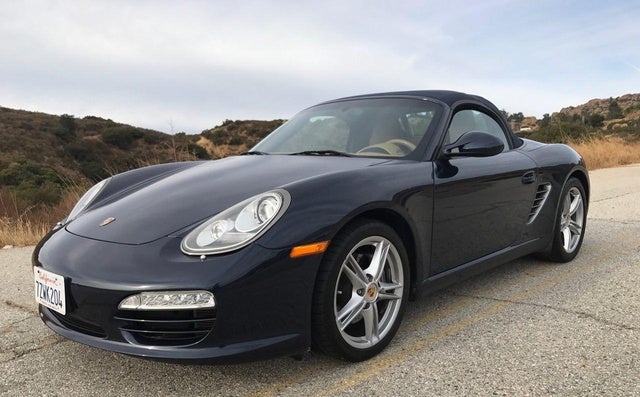 The much-maligned Porsche Boxster takes a big leap toward canonical acceptance for the 2011 model year with the release of the Spyder trim – a shaved and sharpened version of the already formidable Boxster S. While purists scoff at the idea of a midengine Porsche, the rest of us can shove so-called convention straight into the trash and enjoy all the potential, beauty and mostly the graceful violence of a true sports car.

Before we go any further, let’s put in print what we all know to be true – the rear-engine design is antiquated, illogical and foolish. That’s not to say it’s not fun - any car that handles like a 911 and can still come around on you with nearly no provocation is certainly fun - but there’s no sense in pretending it’s the best arrangement for a sports car. Midengine is king. Anyone who tells you different is selling something – probably a 911.

But it’s just that sort of thinking that has prevented the Boxster from getting the respect it so deserves, relegated as it is to second-tier status. The new Spyder should change all that. With the Boxster already bringing a Base and S trim to the table, no one was seriously chiding it for a lack of performance. Even with the Base’s 2.9-liter, 255-hp flat-6, the Boxster motivated around just fine, capable of a jaunt to 60 in just 5.5 seconds. Move up to the Boxster S, which sports a 310-hp, 3.4-liter, DFI flat-6 and it’ll do the same run in 5 even. For more speed, more response and more grip, you had additional options. Choosing the PDK seven-speed, double-clutch transmission over the six-speed manual would pick you up a tenth of a second in acceleration times, and the Porsche Active Suspension Management system would allow you to tighten up corners as well with its selectable “Sport” mode. A sport exhaust would even tune up the harmonics, and for those serious about performance there was always the Sport Chrono Package that would modify throttle, traction, and suspension settings to wring the most out of the little convertible.

In short, the Boxster would go. Even faster around corners than in a straight line, it was celebrated for its grip and composure alike, but more so for its forgiving nature – even at close to 1g on the skid pad. The Boxster could break loose, if you tried hard enough, but it was more than happy to adjust right back to the proper line, and often before you even knew something was wrong. No one has ever said that about the 911.

And yet, that wasn’t enough to get the Boxster the respect it had rightfully earned. In order to correct this gross injustice, the 2,811-pound Spyder was born.

What could be done to make the Boxster S even better? Already trim, the S was put on a drastic weight-savings program that saw the deletion of unnecessary luxuries like cupholders, air conditioning and radio. Aluminum deck and doors were fitted as well as lightweight carbon-backed racing seats and 19-inch wheels that are actually lighter than the S trim’s 18-inch alloys and about equal to the Base’s 17-inch units. Most indicative of their mission was the deletion of the power top that will drop in the Base and S trims in just 12 seconds. Here, a lighter cloth and carbon-framed manual top takes a couple of minutes to erect or collapse, and almost manages to keep out the rain. Even small weight savings were considered, evidenced by nylon pulls for the doors instead of heavier handles and an option for a lithium-ion battery – all of which will add up to a total shed weight of 176 pounds.

The suspension got some attention too, lowered by eight-tenths of an inch and fitted with stiffer shocks and springs. And the Spyder has a wider track - all the better to glide around corners. Not one to ignore the engine, Porsche pulled the 3.4-liter flat-6 out of the Cayman S, good for an additional 10 hp that will show up 950 rpm later than in the Boxster S.

So now lighter, faster and even better in the corners, will it out-perform the 911? Well, there’s a lot to be said for on-paper performance, but those who are fast and old and smart will tell you that the feel of a car is much more important. The Boxster, and the Spyder in particular, just feels right. The near-perfect weight distribution and extremely low rotational inertia impart a confidence that might be enough to outdo the 911, which waits to betray you at every turn. But perhaps more importantly, the Boxster will just feel better as you pour yourself into every corner and point the nose right where you want it. Besides, isn’t that what 911 owners are always going on about – the feel?

What's your take on the 2011 Porsche Boxster?

Have you driven a 2011 Porsche Boxster?
Rank This Car

I Am Trying To Communicate With A Seller About A CarFax Report That He Offe...

How do I provide the seller my gmail address to receive his offering of a CarFax report?

How Many Boxster Spyders Were Sold In Each Of The Years They Were Offered?

Hello Just What I Want Is To Buy A Boxster With This Product But As Living ...

How Long Does It Take My Posting To Appear On The Intranet Site?

Is There A Power Convertible Top On The Boxster Spyder? If Not, How Does Th...