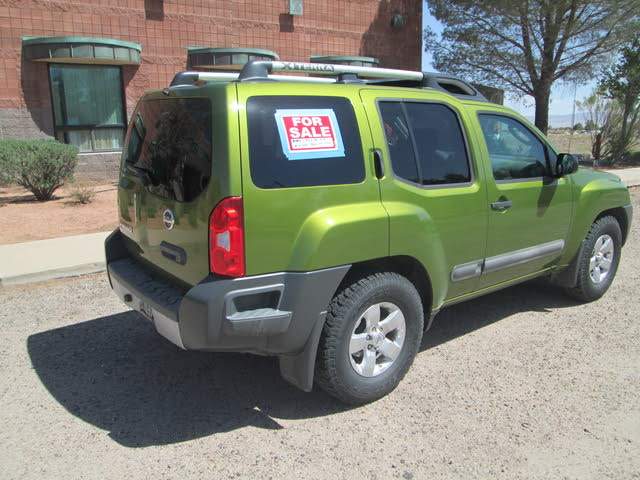 Nissan simplifies its lineup for the Xterra SUV this model year, eliminating the SE trim and offering only three trim levels: the base X, midrange S, and off-road-ready Pro-4X (formerly known as the Off-Road trim). Even the options have been simplified, with only one available options package, which adds leather and a seatback pocket to the Pro-4X. New features and enhancements are minimal in 2011, with side body moldings added to the S trim, a standard first aid kit and rear tire deflector for the rear-wheel-drive S, white-faced gauges in the Pro-4X, and two new paint colors: Lava Red and Metallic Green.

The 2011 Xterra uses the same engine regardless of the trim: a 4.0-liter DOHC V6 with 261 hp at 5,600 rpm, 281 lb-ft of torque at 4,000 rpm, and a towing capacity of 5,000 pounds. The base X comes with a standard five-speed automatic transmission, while the other trims offer either a standard six-speed manual transmission or optional five-speed automatic. With rear-wheel-drive automatic mileage estimates of 16 mpg city/22 highway, and all-wheel drive estimates of 15 (automatic) to 16 mpg (manual) city/20 highway, good fuel efficiency is definitely not a selling point for the Xterra. The off-road capability of the Pro-4X, however, is a strong suit. While the X and S trims are available with either rear-wheel drive or part-time four-wheel drive, the Pro-4X offers only standard part-time four-wheel drive with an electronic locking rear differential. The 4WD automatic version of the Pro-4X adds standard hill descent control (which helps modulate speed and brake pressure during a descent) and hill start assist (to prevent the vehicle from rolling backward when starting up a hill from a complete stop). In addition, the manual Pro-4X has a clutch start/cancel feature to start the car from a stop without using the clutch.

The Xterra is recognizable, as in years past, by its angled strut grille, short front overhang (despite its long wheelbase), oddly shaped rear window, and tubular roof rack with air dam. Other standard features for all trims include rear bumper steps to make the roof more accessible. The accessibility of the interior of the car may provide more of a challenge. Reviews of the 2010 note that the high clearance of the Xterra, while good for off-roading, makes access difficult for shorter drivers and passengers (although side step rails are available for the X and S trims).

The S and Pro-4X vary their standard exterior features, with both trims including roof-rack crossbars and a covered gearbox in the 4WD trims. The Pro-4X is further distinguished by standard roof-rack-mounted off-road lights, silver inner headlights (rather than the black found on the S and X trims), and front foglights. Skid plates protect the Pro-4X's oil pan, fuel tank, and 4x4 transfer case (although all trims feature a standard skid plate on the lower radiator). The S and Pro-4X 4WD also come with a standard front tow hook, splashguards, black side-body moldings (available as an individual option for the base X trim), and dual power outside mirrors.

Tires and wheels are tailored by trim on the Xterra, with the base X riding on 16-inch steel wheels, the S trim using 16-inch aluminum alloy wheels with Goodrich Long Trail tires, and the Pro-4X ready to leave paved roads with six-spoke 16-inch machine-finished aluminum alloy wheels with Goodrich Rugged Trail tires. Each trim includes a full-size spare.

Designed to seat five adults, the 2010 Xterra got mixed reviews for seat comfort. The 2011 continues to offer reclining front bucket seats and 60/40-split folding rear seats with removable rear seat cushions. When rear seats are completely folded, the Xterra gives almost 66 cubic feet of storage space. The Pro-4X has a standard fold-flat front passenger seat as well to haul a surfboard or other long gear. The X and S trims cover their seats with cloth, while the Pro-4X uses a trim-specific fabric (or available leather in the optional package). While the base X trim includes a four-way manual driver’s seat adjustment, the S and Pro-4X offer an eight-way manual driver’s seat with adjustable lumbar support for additional comfort.

Standard interior features for all 2011 Xterra trims include air conditioning, power windows and locks with remote keyless entry, cruise control, a tilt steering wheel, three 12-volt power outlets, and luggage side nets. However, last year’s Xterra drew criticism for an interior that looked, to some, dated and cheap with its hard plastic, skimping on luxury and letting in excessive road noise. Since little has changed for this model year, these could continue to be issues with the interior.

Cargo is king in the Xterra and one of the areas where its spaciousness and versatility shine. All trims provide an under-floor cargo storage area. The S and Pro-4X trims go even further, with a total of ten cargo hooks, Nissan’s Easy Clean cargo area, and the Utili-Trak Cargo Channel system, which makes it easier to tie down cargo using the four adjustable cleats mounted in two channels in the floor. Although the hard plastic of the cargo area is easy to keep clean, 2010 reviews found that items not tied down could slide around, and the plastic too easily showed scuffs and scars. Other cargo options (available as individual additions) for all three trims include a sliding cargo organizer to compartmentalize the storage area and a retractable cargo cover to hide the contents from view.

Technology in the Xterra is somewhat lean. A 2010 review noted that, despite poor rear visibility, no backup camera is available, nor has one been added to the lineup of available features for 2011. The X and S trims come with an AM/FM/CD with six speakers. Higher-end technology is standard only in the Pro-4X, including Bluetooth technology for hands-free phone use, a Rockford Fosgate audio system with AM/FM and a 6-CD changer and nine speakers, steering-wheel-mounted audio controls, an auxiliary audio input jack, MP3/WMA playback, speed-sensitive volume control, and XM satellite radio (with subscription in the automatic-transmission Pro-4X only). Since the Pro-4X is the only trim to have a 6-CD changer, it is also the only trim that offers an optional dockable portable DVD player to entertain rear seat passengers.

Although the National Highway Transportation Safety Board’s criteria for assessing the safety of vehicles is changing in 2011, the 2010 Nissan Xterra received four out of five stars for front driver and passenger crashes, and a perfect five stars for side impact crash tests. It received middling ratings for rollovers, however, earning only three stars for both the rear-wheel- and four-wheel-drive Xterra. The Insurance Institute for Highway safety rated the 2010 Xterra as Good (its highest rating) for front and side impact crashes, but only Acceptable for its roof strength test, which measures how the car will stand up to a rollover. All 2011 Nissan Xterras come with an advanced airbag system, featuring dual-stage supplemental front airbags with seat belt and occupant classification sensors, driver and front-passenger seat-mounted side-impact airbags, and roof-mounted curtain airbags for side-impact and rollover protection. Additional standard safety features include Vehicle Dynamic Control with a traction control system to improve stability and a tire pressure monitoring system, as well as antilock brakes with electronic brakeforce distribution.

The 2011 Nissan Xterra should continue to offer a truck-based off-road SUV to compete with the likes of the Jeep Wrangler and Toyota FJ Cruiser. The Xterra offers plenty of cargo space and versatility, combined with a powerful V6 engine. For those looking for an around-town SUV, however, its stiff suspension and truck-like ride, road noise, poor fuel economy, and dated interior may lead buyers toward a car-based vehicle, such as the Honda CR-V or Toyota Rav4.

Have you driven a 2011 Nissan Xterra?
Rank This Car

How We Can Get Pre Approval Confirmation By Email ??

I have been pre-approved by cargurus on website, how do I get the letter printed so i can show to the dealership?

Are you able to turn on the ABS in a Nissan Xterra?

I want to trade in my vehicle which currently has a balance of 10,000 towards the vehicle below. I cannot use the same finance company because this dealer is a private dealer. Do you offer financ...

Over The Last Couple Days My Car Has Went From Bogging Down When I Try To A...

Could it be coil pack? Fuel filter? Bad fuel? Or something else? I know I have has some issues with the fuel gauge working.