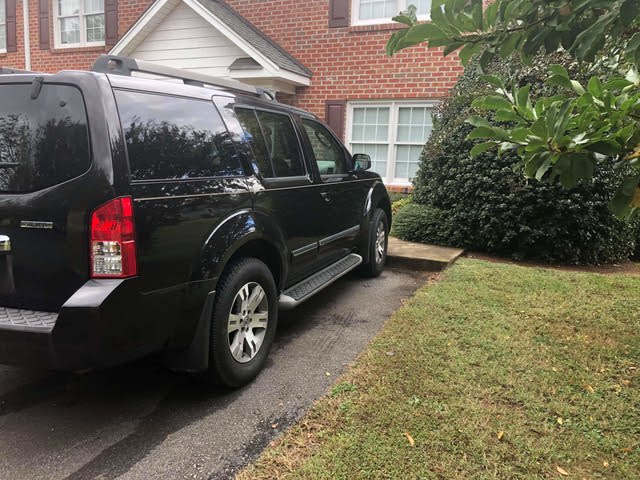 As it enters its twenty-fifth year, the 2011 Nissan Pathfinder offers just what one would find in a midsize crossover for more money with less ride comfort. But if towing a good-size trailer or trips through the backwoods are part of your expected driving experience, this rugged SUV might be just the ticket.

The venerable Nissan Pathfinder turns twenty-five, and to celebrate, Nissan adds a whole new trim level. The Silver Edition joins the 2011 Pathfinder lineup, while what was once the SE trim is now re-labeled the SV. Thus the revamped lineup for this midsize, seven-passenger SUV features the base S, lower-midlevel SV, the new Silver Edition, and the top-shelf LE, with this flagship trim level including the LE V6 and LE V8 4WD. All trims are available in standard rear-wheel-drive or available part-time four-wheel-drive (4WD) configurations with a V6 powerplant, while the LE V8 4WD is, as its name implies, available only with the V8 engine and all-mode 4WD. Other than this shuffling of trim designations, this off-road-capable sport ute is relatively unchanged for 2011.

All the 2011 Pathfinder’s trims are equipped with three rows of seating, roomy cabins, and glitch-free flat-folding second- and third-row seatbacks for a relatively cavernous 79 cubic feet of cargo room. All trims are also equipped with a standard roof rack, skid plates, and alloy wheels, as well as a trailer hitch and wiring. Alas, this rugged beast rides on the Titan chassis, meaning a truck-like ride that isn’t for everyone, and gas mileage is nothing to write home about, either, even with the V6. It does, however, boast prodigious towing capability for its size, with V6-equipped trims maxed out at 6,000 pounds and the V8 able to haul some 7,000 pounds.

Those in the market for a new ute might want to check out some of the Pathfinder’s competition. For pure towing power, Chevy’s Tahoe is tough to beat, while midsize crossovers like the Ford Explorer, GMC Acadia, and Mazda CX-9 offer a more sedan-like driving experience. Both the Jeep Grand Cherokee and the Toyota 4Runner are similar in size and capability to the Pathfinder, with the Grand Cherokee a bit more luxurious while maintaining a credible off-road capability and the 4Runner running a tad lighter on the wallet. 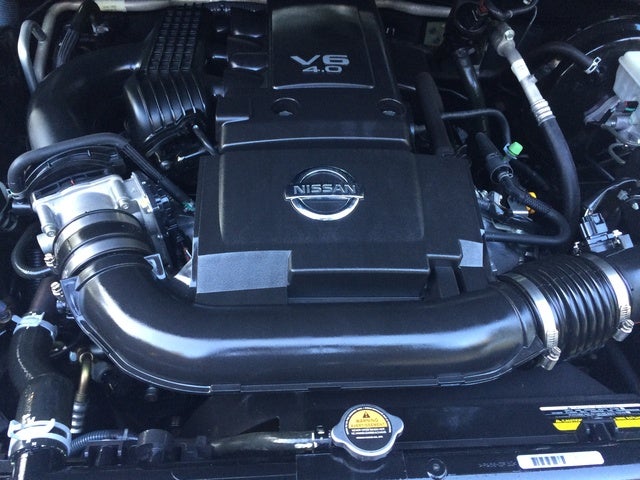 Standard power for the 2011 Pathfinder comes from a 4.0-liter V6 engine that’s managed by a standard five-speed automatic transmission in the S, SV, and Silver Edition trims and a five-speed auto-manual transmission in the LE V6 and LE V6 4WD. Expect some 266 hp at 5,600 rpm and 288 lb-ft of torque at 4,000 rpm out of the V6, while mileage estimates, even with variable valve timing, are pegged at a lackluster 15/22 mpg for RWD trims and 14/20 for 4WD-equipped trims. Towing capacity for the properly equipped V6 trims is 6,000 pounds.

If a bit more oomph is needed, the 2011 Pathfinder LE V8 4WD is delivered with a 5.6-liter V8 engine capable of 310 hp at 5,200 rpm. Again utilizing the five-speed auto-manual transmission, the V8 puts out some 388 lb-ft of torque at 3,400 rpm, good enough for 7,000 pounds of towing capacity, with proper equipment. Needless to say, this torque-heavy beast gobbles gas at a prodigious 13/18 mpg.

The 2011 Pathfinder S, SV, and Silver Edition on-demand 4WD trims are aided by manual hi-lo gear selection and auto-locking hubs, while the LE V6 4WD version eases things a bit with electronic hi-lo gear selection. Both the LE V6 and V8 4WD come with Nissan’s standard “all-mode” technology, which allows the 4WD mechanism to remain engaged even on dry pavement.

Most reviewers concede that the Pathfinder’s V6 is at least competent in acceleration, though the five-speed automatic transmission may take some getting used to when passing and merging due to its propensity to hesitate a beat or two on the downshift. Obviously, the V8 is lauded by virtually all reviewers as having power to spare in all driving situations, with the five-speed auto-stick performing nearly flawlessly. One test has the Pathfinder’s V6 scooting from 0-60 in 7.4 seconds in a 4WD-equipped version, and 7.8 seconds in a RWD configuration. An additional run found the LE V8 4WD getting from 0-60 in a respectable 7.0 seconds. One further remark from a number of reviewers concerns the V6’s raucousness on heavy acceleration, though all note that it quickly subsides on reaching cruising speed.

With its truck-based chassis, the 2011 Pathfinder will obviously deliver a somewhat less than posh ride. Despite a double-wishbone, four-wheel independent suspension and front and rear stabilizer bars, virtually all reviewers find that bumps and broken pavement are not as well-absorbed as they might be, though the 17-inch tires on the SV and Silver Edition trims do a better job of it than the LE’s standard 18-inch wheels. The Pathfinder S, meanwhile rolls on 16-inch all-season radials, which most reviewers find similar in bump mitigation to the 17-inch wheels on the SV and Silver Edition.

Though many reviewers find the Pathfinder’s steering to be surprisingly well-balanced, this rugged ute still displays unnerving body lean, even in modest cornering, which reflects its truck-based heritage. Brakes, however, are noted by reviewers as powerful and true, with no noticeable pedal dysfunction. A few reviewers note that the vehicle's wide turning radius will occasionally prove challenging when maneuvering in tight quarters.

Options for the lower trims are few, including only an alarm impact sensor and front and rear carpeted floor mats. Moving up to the LE trim level means available rear-seat DVD entertainment, with the hard-drive navigation system available in the LE V6 and the power moonroof available for the LE V8 4WD.

Though reviewers find the Pathfinder’s seats tolerably comfortable, with plenty of shoulder room, the third-row bench seat is most often described as fit only for small children. Most reviewers find interior materials to be low-budget, though a few concede that those padded surfaces that survive are logically placed and provide more than a modicum of comfort. Legroom in the second row of seating is adequate, at best, according to virtually all reviewers, though even that disappears quickly when the front seats are slid back. Headroom, meanwhile, is noted as being fairly generous in the front and second rows. A number of reviewers, meantime, laud the decent cabin storage, with many especially impressed by the handy, in-floor compartment located under the second-row seat. Gauges and controls are for the most part easy to read and to locate, say reviewers, with the standard navigation system in the LE V8 4WD absorbing none of the audio or climate control functions.

All 2011 Pathfinder trims are equipped with an impressive number of standard safety features. The list begins with four-wheel disc ABS and electronic brakeforce distribution, as well as traction and stability control. Passenger protection is provided by dual front side-mounted airbags and three-row head airbags, complemented by front head restraint whiplash protection. A remote anti-theft alarm is additionally standard on all trims, while the SV trim level and higher include standard front fog/driving lights and dusk-sensing headlights.

The National Highway Traffic Safety Administration (NHTSA), because it is in the midst of reassessing its testing methods, has figures only on the nearly mirror-image 2010 Pathfinder. It gets a tepid four stars in front and side impact testing, and only three stars in rollover testing for both RWD and 4WD configurations. The Insurance Institute for Highway Safety (IIHS), meanwhile, judges the 2011 Pathfinder a little better with its highest rating of Good in front and side impact tests, but gives it their second lowest rating of Marginal in rollover testing.

As seems traditional in this era of frugality, the top owner gripe with the 2011 Pathfinder is with its downright poor fuel efficiency, even with the V6. Cheap interior materials and that confining third-row seat come in a close second in owner dissatisfaction, while some corner-cutting with features and the distinct lack of options for the lower trim levels also has more than a few owners shaking their heads. Finally, wind and road noise, as well as an awkward and heavy, manual-opening-only rear liftgate, have several owners a bit peeved.

Positives in owner's eyes include the 2011 Pathfinder’s comfortable seats and cabin room, with an emphasis on its easily foldable second- and third-row seatbacks. A muscular and rugged exterior style pleases more than a few owners, while both engines, though not exactly gas-friendly, are lauded by many as powerful and reliable, leaving most owners well-satisfied with this midsize SUV’s off-road capabilities and generous towing capacity. Finally, the Bose premium audio available in the Silver Edition and LE trims draws kudos.

What's your take on the 2011 Nissan Pathfinder?

Users ranked 2011 Nissan Pathfinder against other cars which they drove/owned. Each ranking was based on 9 categories. Here is the summary of top rankings.

Have you driven a 2011 Nissan Pathfinder?
Rank This Car

Can A Bad Transmission Sensor Cut Off Car?

I have a 2011 2011 Nissan Pathfinder - the car was running and i place the car in reverse to pack up but the transmission did not engage and the car began to roll backwards. I placed by foot on the...

What would cause the Brake ABS VDC off and Slip lights to come on all at the same time?

Car Shutting Down While Driving

How Do I Contact Cargurus About A Private Sale