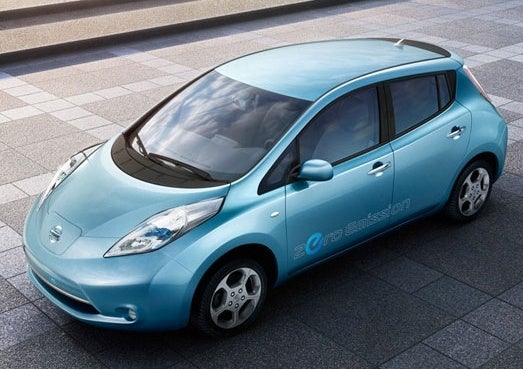 The game-changing 2011 Nissan Leaf, with its quick acceleration, excellent handling, and surprisingly large cargo area, has the opportunity to make a huge impact on automotive history as the first mass-produced, relatively affordable, 100-percent electric car.

With a cruising range of only 100 miles on a single charge, the Leaf will remain of limited use to those who live in rural areas or those who must travel frequently at highway speeds.

The Nissan Leaf may not rocket us toward some utopian World of Tomorrow, but it sure feels like a piece of that world has come to life. The Leaf encompasses all the current electric-car technology and packages it in a compact yet futuristic body, all at a price just about anyone can afford. Although it will be available only in limited quantities for the next couple of years, expect the Leaf to make big waves in the automotive industry and find its way into numerous suburban and urban garages, which will essentially become individual charging (i.e. fuel) stations.

The all-new 2011 Nissan Leaf electric car should turn a few heads when it begins its worldwide rollout in the U.S. and Japan in late 2010. The Leaf's curvaceous, wedge-shaped exterior and the sleek shapes of its windows give it a futuristic look and hint at the gas-free technology inside. However, buyers will find the Leaf in short supply for its first couple of years. Nissan has announced limited availability through 2011, with sales of the Leaf beginning in some European countries, including the U.K., Ireland, and Portugal, in early 2011. By 2012, the groundbreaking electric car should be available worldwide.

Borrowing its body from the Nissan Versa, the Leaf arrives as a four-door, five-seat hatchback with ample cargo room. It comes equipped with an electric motor in place of a gasoline-powered internal combustion engine, as well as a pack of 48 lithium-ion battery modules, evenly distributed along the wheelbase under the front seats, rear seats, and rear floor.

The Leaf's aerodynamic underbody and rear spoiler minimize drag and help the Leaf cut smartly through the air, maximizing its mileage on a single battery charge. LED headlights, chrome door handles, and dual power sideview mirrors are among the Leaf's exterior features.

Nissan plans to initially offer the Leaf in SV and SL trims, with the SL receiving an integrated solar panel on the rear spoiler, which helps recharge the battery pack. Buyers will find its pricing comparable to that of a midsize sedan, although federal tax credits and other incentives will knock the price down by several thousand dollars, making the Leaf the first electric car offered at a price point geared toward the typical auto buyer. 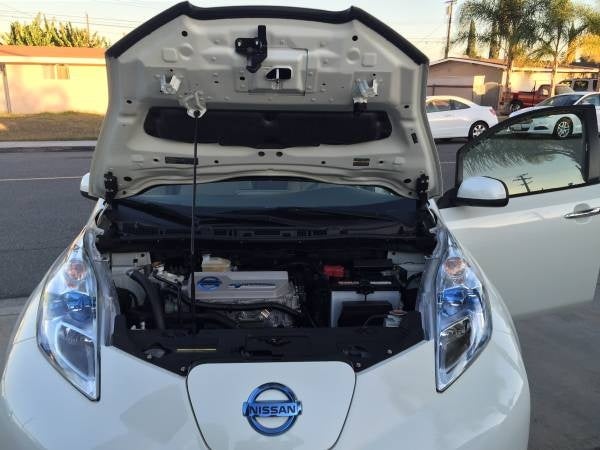 The Leaf’s lithium-ion battery pack powers an 80-kilowatt electric motor, which drives the car through the front wheels and produces 106 hp and 207 lb-ft of torque. As with all electric vehicles, the Leaf has no transmission, and full torque is always available in an instant, so the Leaf has shockingly quick acceleration. Drivers start the car using the Nissan Intelligent Key with push-button operation and operate it using a palm-shift drive selector located on the center console. The powerplant pushes the Leaf to a top speed of 90 mph and produces zero emissions. In fact, there's no muffler or tailpipe either, since the Leaf doesn't need them.

The Leaf is one of the first vehicles to use lithium-ion batteries, which provide better range and acceleration than the more common nickel-metal hydride batteries, according to the automaker. The Leaf has a cruising range of about 100 miles on a single charge, although Nissan notes its range will vary depending on such factors as the vehicle's speed, the driver's style, the use of the climate control system, the cargo it's carrying, and the road topography. Under ideal conditions, the Leaf could travel more than 130 miles on a charge, but only about 70 miles at highway speeds. In typical around-town driving, the Leaf travels about 105 miles on a charge, which should be fine for millions of urban and suburban drivers, who typically travel less than 60 miles a day, but not so much for heavy commuters or those in rural areas. Regenerative brakes help extend the battery charge and reduce wear on the brake pads, which minimizes maintenance costs, according to Nissan.

Nissan says the battery pack has a lifespan of five to 10 years, although after five years the pack will hold only about 80% of its initial charge capability. Charge capacity will diminish more quickly if owners routinely use the faster method of charging. The Leaf's two charging receptacles are located under a lid on the front of the vehicle above the open grille. The vehicle comes with a 110/120-volt Trickle charge cable, which owners can use to charge the vehicle using any outlet when not at home.

Drivers will find the Leaf whisper silent, since no combustion goes on under the hood. However, the Leaf emits an audio signal when traveling forward or backward to alert pedestrians or bystanders of its approach.

The Leaf delivers smooth acceleration and a refined ride that easily surpasses that of most cars in its price range, according to early reviewers, due in part to the location of the massive battery pack. By distributing the pack between the axles and low in the body, Nissan accomplished a number of goals. For instance, it frees up space in the trunk for cargo. In addition, it gives the Leaf sound weight distribution and cornering ability with minimal body roll, thanks to the car's low center of gravity.

The Leaf's suspension incorporates front and rear stabilizer bars for a solid ride with minimal flexing. Mechanical features include power-assisted front and rear disc brakes with brake assist and electronic brakeforce distribution, as well as speed-sensitive power-assisted steering. The Leaf rides on 16-inch alloy wheels. There's no spare tire, but Nissan includes a tire repair kit in the standard package. 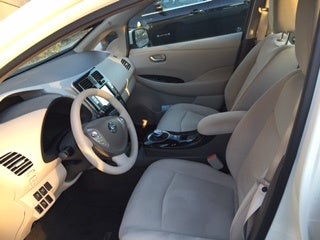 Not only is the Leaf driven by impressive technology, but its cabin is loaded with it as well. The base SV comes equipped with a navigation system, so drivers can constantly monitor their location, as well as the remaining power, which helps ease “range anxiety,” the fear your Leaf will run out of juice and leave you stranded. The SV also comes standard with smart phone integration, allowing owners to start the vehicle and control the climate and charging systems through their cell phones. For instance, by heating or cooling the vehicle prior to starting it, when it's still connected to the charging station, owners can maximize battery power once under way.

The SL adds a rear-view camera, automatic headlights, and a rear spoiler solar panel, which helps charge the battery. Both trims include three years of roadside assistance.

Both Leaf trims come equipped with Nissan's Advanced Air Bag System, which includes dual-stage front, front seat-mounted side-impact, and roof-mounted side-curtain airbags. Other safety features include Vehicle Dynamic Control with Traction Control, a tire pressure monitoring system, and a vehicle security system. The Leaf has not yet been collision-tested by the NHTSA or IIHS, although the Nissan Versa, on which it's based, achieved respectable safety marks from both organizations.

Though buyers have not yet had a chance to get their hands on the Leaf, early automotive reviewers collectively give the Leaf a big thumb's up, noting its ability to change automotive history, with an impact similar to the Model T's. Reviewers are particularly impressed with the Leaf's peppy acceleration and excellent handling and cornering ability. They also like the fact that the instrumentation, dash, and state-of-the-art graphics do a very good job of keeping drivers informed of the battery's existing charge and the vehicle's remaining range. Also, the fact that the Leaf requires minimal maintenance through its lifetime impresses reviewers. The charging time and 100-mile range on a single charge are among the Leaf's setbacks, although Nissan notes it hopes and expects the Leaf to have a range of more than 300 miles in the coming years.

Users ranked 2011 Nissan LEAF against other cars which they drove/owned. Each ranking was based on 9 categories. Here is the summary of top rankings.

Have you driven a 2011 Nissan LEAF?
Rank This Car

I have never heard of this vehicle, looking for a fuel efficient, dependable vehicle.

93 views with 5 answers (last answer about a month ago)

Hi.. I'm looking at nissan leafs.. And can't find in the advertisement if battery is owned or flex lease... This is misleading.. Please ask the dealers to clarify...

If you have carfax above mentioned I'll purchase this right now.