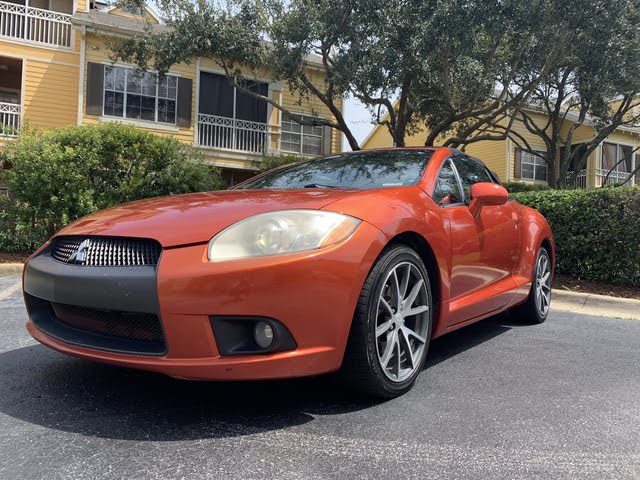 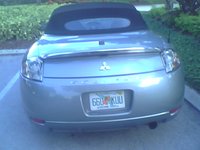 In the automotive world Spyder refers not to the eight-legged arthropod but to a small, sporty roadster, usually of Italian descent. Mitsubishi has co-opted the Mediterranean nomenclature for its stylish and popular Eclipse drop-top, hoping to lend an exotic air to its (mostly) affordable convertible. For 2011 the Eclipse Spyder receives the same mid-cycle freshening as its coupe brethren: new front and rear fascias, updated wheels, and a firmed-up suspension. The coupe’s new blacked-out center roof panel is, of course, replaced by a thick, lined fabric soft top.

With the flick of a switch, the Eclipse Spyder’s hydraulic top disappears beneath a hard tonneau cover in just 19 seconds. A glass rear window with electronic defroster element is an up-market touch. With the top up the car’s profile is only mildly flattering, as chunky C-pillars obscure both the designer’s vision and the driver’s. But once the top is lowered, things improve dramatically; the Eclipse Spyder has a modern, sexy shape that narrows in the center like an hourglass. The jewel-like detailing of the head- and taillights and the artful 18-inch alloy wheels complete the look.

Structurally the 2011 Eclipse Spyder is mainly unchanged from the 2009 version. In chopping the top Mitsubishi has added about 200 pounds of structural reinforcement, including high-strength steel beams in the doors. While the Eclipse rides solidly on smooth roads, it suffers from some unwelcome cowl shake and chatter on rougher surfaces. Though not unusual in a convertible, the chassis vibrations do detract from the al fresco experience and hint at the platform’s age.

For 2011 the Eclipse Spyder is offered in two trims, GS Sport and GT. The GS Sport is the base trim (unlike the coupe, the low-priced GS isn’t offered) and starts at just under $28,000 with four-cylinder power. Mitsubishi has loaded the GS Sport with lots of unexpected standard features. In addition to heated, leather-clad seats, all Spyder’s get HID xenon headlights, a rear-view backup camera and a seriously loud 650-watt CD stereo by specialist Rockford Fosgate. The step-up Spyder GT trim gets a 100-hp boost from its V6 engine along with a five-speed transmission and dual exhaust, though at over $32,000 it presents less of a value proposition.

The Eclipse Spyder features a stylish interior - a good thing since it’s always on display. The standard leather bucket seats and contoured dashboard lend an upscale air, while the thick, three-spoke steering wheel and aggressive-looking blue instruments establish its sporting credentials. The aforementioned Rockford stereo is capable of filling the car with rich, full sound and has both MP3 and satellite radio functionality. Airflow is well managed, thanks to the sculpted body work, giving occupants the delicious, wind-in-your-hair feeling without excess buffeting.

The four-seat Eclipse Spyder allows two (hopefully small) rear passengers to enjoy the open-air motoring experience. Though space up front is generous, with plenty of leg and elbow room (and unlimited headroom) the already tight rear seats find their legroom almost completely eaten up by the top's mechanism. The power-folding apparatus also seriously encroaches on trunk space; the Spyder's scant 5.2-cubic-foot cargo capacity is barely enough for an overnight bag.

Eclipse Spyder GS Sports share their 2.4-liter inline four-cylinder (I4) engine with the coupe. Despite making a decent 162 hp and 162 lb-ft of torque, the four-cylinder is overwhelmed by the Spyder’s additional curb weight. This added avoirdupois isn’t the only thing holding back performance, as the low-tech four-speed automatic transmission shifts lazily. GT Spyders benefit from a 265-hp, 3.8-liter V6 and five-speed automatic, a drivetrain whose performance reaches the bar set by the aggressive styling. Disappointingly, no manual transmission is offered.

The Eclipse Spyder’s four-wheel independent suspension utilizes a MacPherson strut-type front and multi-link rear arrangement that is firmed up for 2011 with new shocks and thick anti-roll bars. Despite the revisions the Eclipse’s front-wheel-drive architecture just doesn’t have the chops to provide the balanced, natural handling of, say, a BMW 1 Series convertible. Despite its lack of finesse (mainly manifested in moderate understeer) the Eclipse Spyder’s 18-inch wheels and fat tires offer plenty of grip, while the nicely weighted steering allows the car to be placed accurately. Ride comfort is acceptable for a sporty car, but some may find the firm shocks to be a bit harsh on rough roads.

For 2011 the Eclipse Spyder gets a full complement of safety and security features. All four wheels are equipped with disc brakes and antilock control. Standard active vehicle stability control keeps the Eclipse on an even keel. Dual front and side airbags ensure the occupant’s safety in an accident, as do seat belt pre-tensioners. Though the 2011 model hasn't been tested for crash-worthiness, the fundamentally similar 2009 Eclipse Spyder scored well in Insurance Institute front impact testing.

Among mid-priced convertibles the 2011 Eclipse Spyder offers a unique combination of style and performance. While the less-expensive Chrysler Sebring may offer more space and an optional hard top, its uninspired handling and quivery structure relegate it to boulevardier status only. European offerings like the VW Eos or BMW 1 Series may have better name recognition, but their newer, stiffer platforms come at a hefty price. For the moment Mitsubishi has the small, sporty convertible niche all to itself.

What's your take on the 2011 Mitsubishi Eclipse Spyder?

Have you driven a 2011 Mitsubishi Eclipse Spyder?
Rank This Car

I'm not sure I need a turbo but i would like to increase nthe low end speed.