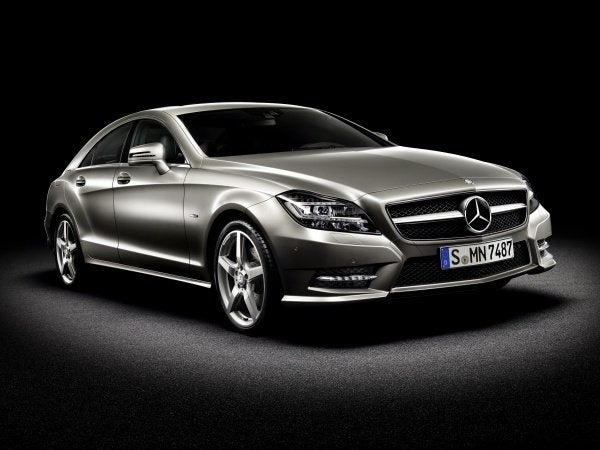 Looking for a Used CLS-Class in your area?

With a redesign looming ever closer on the horizon, the Mercedes-Benz CLS-class enters 2011 virtually untouched. Some of the jealousy between trims has been removed, thanks to Mercedes making the AMG Sport Package – unique exterior trim, steering-wheel shift paddles, and AMG 18-inch wheels – a standard feature for the base CLS550. Looks like the performance-minded, AMG-tuned CLS63 will have to rely on brute power to distinguish itself in this family of premium midsize four-door coupes.

Or should that be a couple-style sedan? With its sloping rear roofline, four doors and 2+2 configuration, even Mercedes seems confused as to what to call it. Press releases from Mercedes have stated they wanted to combine the "strong, emotive charisma" of a coupe with the "comfort and practicality" of a sedan.

Regardless, it’s the brainchild of Michael Fink, the same designer who brought us the CLK and the C-Sportcoupe in the Mercedes lineup, not to mention the ultra-gaudy Maybach 57 and 62. With a bit more sport this time ‘round, the CLS offers two V8 engines for its two trim levels – the CLS550 and the CLS63.
For the 550, a 5.5-liter V8 offers 382 horsepower at 6,000 rpm, as well as an even more impressive 391 lb-ft of torque at only 2,800 rpm. It’s enough to rocket you to 60 mpg in just over 4.5 seconds, although I wouldn’t expect to get the EPA’s estimated 14/21 mpg while doing that. It’s an aluminum block with aluminum head and magnesium intake sporting four valves per cylinder and independent continuously variable valve timing on the intake and exhaust.

But that’s not enough for some of you, so AMG decided they were done with tinkering with Mercedes powerplants and instead designed their own engine – the 6.2-liter M156 V8. Mercedes claims it’s the most powerful naturally aspirated V8, and with 507 hp and 465 lb-ft of torque pushing you to 60 mph in just over 4 seconds, it’s hard to argue, even if they don’t show up until 6,800 and 5,200 rpm, respectively. 12/18 mpg is the best you can expect as far as mileage is concerned, even with the seven-speed automatic that comes standard with both V8 engines.

However, as Mercedes is so happy to remind us, it’s not about doing just one thing right, and speed is hardly the sole focus of the CLS. An air-spring suspension is also standard for both trims, allowing the driver to choose between three modes – Comfort, Sport 1, and Sport 2. Even Comfort will stiffen as you pile on speed, but the two Sport settings will really tighten things up. In case you need to transverse exceedingly rough terrain or navigate aggressive speed bumps, the suspension can also raise the car a full 3 inches.

Perhaps more impressive is the Pre-Safe system, which predicts and prepares for an impending collision by preloading seatbelts, closing the sunroof, and adjusting the front passenger seat to optimal crash positioning, whatever they’ve decided that is. Options include self-cleaning bi-xenon HIDs, GPS, radar-guided cruise, and the COMAND control system, but the CLS comes well-equipped long before you start browsing the options list, with heated auto-dimming mirrors, rain-sensing wipers, an automatic climate control system, and leather with wood trim. In fact, you get your choice of four interior colors, three types of leather, and two kinds of wood.

So yes, there’s a new CLS right around the corner, but this is a fine vehicle as is. However, with rumors of an all-new series of AMG engines to power its successor, it may be prudent to hold off a few more months.

What's your take on the 2011 Mercedes-Benz CLS-Class?

Have you driven a 2011 Mercedes-Benz CLS-Class?
Rank This Car

Looking for a Used CLS-Class in your area?

How Do I Determine How Fair Price Differential In A Car Having 10,000 Mile ...

How Come There Is No AMG Category. Also How Hard Would It Be To Add An Paym...

its as simple question and an easy fix