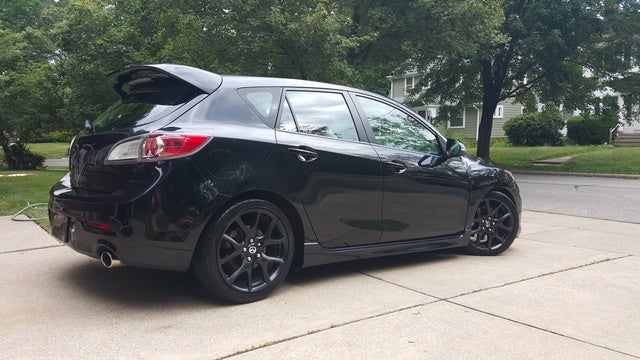 Once again unwilling to take even a small break, Mazda has added additional features to its Mazdaspeed3 just a year after a major redesign. The optional Technology Package that previously added a 242-watt Bose stereo, alarm, proximity fob for entry and ignition, and a navigation system has been beefed up with rain-sensing wipers, LED taillights, and automatic adaptive bi-xenon headlights – all features unavailable previously.

Otherwise, they ain’t fixin’ what ain’t broke with what might be the best hot hatch out there. A 2.3-liter, direct-injected, 263-hp turbocharged four-cylinder still sits beneath the hood, grafted to a six-speed manual tranny. It’ll get you to 60 mph in less than 6 seconds, but unfortunately Mazda has failed to address the substantial torque steer so many have complained about. Still, the limited-slip differential does its job quite well, except in wet conditions, where the inexperienced driver may find some unintentional hooligan antics livening up the ride. The MacPherson strut front suspension and multi-link rear was stiffened last year, and you can definitely feel it in the corners as well as over bumps, which resonate into the cabin. Yes, it provides a significantly harsher ride than its less performance-oriented siblings, but if you’re looking at a Mazdaspeed3, you’re more interested in tackling turns and carving corners than a haughty highway haul.

And the trade-off for that bump resonance is an increase in torsional rigidity – Mazda claims 2% - from the stiffer springs, increased damping, and thicker sheetmetal that were applied last year. Sure, 2% isn’t going to make headlines, but this more than any other industry is a game of inches.

The taller 2nd-5th gears added last year, as well as the larger hood scoop and new intake ducts, were all applied in an effort to increase efficiency, resulting in an EPA-estimated 18/25 mpg. That said, you’ll need premium fuel to get it, so the gain becomes slightly negligible. Fully electronic braking and steering also contributed to the efficiency crusade, and both systems have received very positive reviews from testers and owners alike.

Unfortunately, the Mazdaspeed3 suffers from the same tiny, useless, and tauntingly annoying nav screen as the rest of the Mazda3 lineup, and you can’t get the rest of the goodies in the Tech Package without it. It’s a glaring spot of rotten on an otherwise blemish-free apple, if you can ignore the torque steer that so threatens to bring on the knee sweats. Still, it’s hard to ignore the fact that you can get a performer like this, one that offers 263 hp and 280 lb-ft of torque at 3,000 rpm, in a four-door hatchback platform.

Now if only they’d offer it with AWD.

What's your take on the 2011 Mazda MAZDASPEED3?

Have you driven a 2011 Mazda MAZDASPEED3?
Rank This Car

Do I need to purchase on the CarGurus website for the 30 day warrranty?