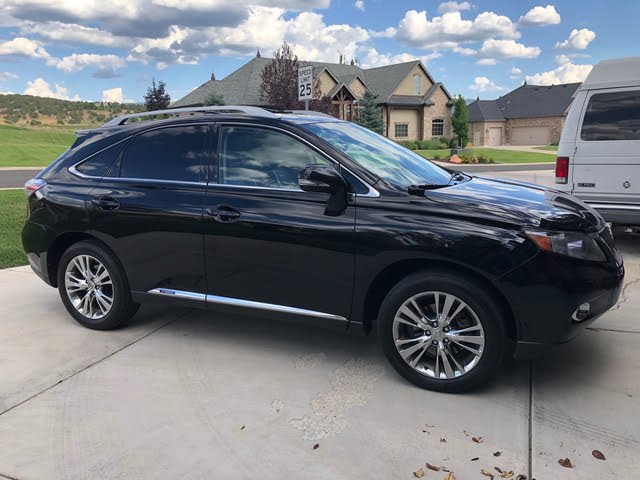 The 2011 Lexus RX 450h is Lexus's top midsize luxury SUV with hybrid technology. While it was once the class of the segment, buyers who purchase the 2011 RX 450h will be making a few compromises.

Lexus's hybrid technology affords both positives and negatives for buyers. While the technology allows for all-electric propulsion when speeds are less than 25 mph, reviewers complain that in a luxury SUV, the regenerative braking should be more refined and less "grabby" than it is in the 2011 model. Likewise, acceleration requires a pause for the hybrid system to engage the 3.5-liter V6 powertrain.

The positives are that the city mileage of the 2011 Lexus RX 450h ranges from 30 to 32 mpg with front-wheel drive and 28 mpg with an available all-wheel-drive system. Acceleration is fair, if not impressive, at a little more than 7 seconds to get from 0-60 mph. That is combined with a suspension system that reviewers term comfortable and plush, rather than extremely precise.

That comfortable feel is augmented by an interior that offers quality leather seats for both front and rear occupants. The driver and front occupant benefit from a center stack that includes a trackball-like control system for audio, climate, and navigation options. Reviewers note that this is intuitive to learn.

A lot of features are available as options in the RX 450h, including a heads-up display that transmits speed and other information to a windshield overlay for reduced distractions and a voice-activated navigation system. Changes for 2011 include a removed compass in SUVs with the optional nav system and a 12-volt outlet moved outside of the center console.

Buyers looking for exterior differences between the Lexus RX 350 and the RX 450h will find that they're minimal; the Lexus logos on the RX 450h are trimmed in blue, the grille and bumper are more aggressive, and LED headlights with blue tint are optional. Like the other RXs, the 2011 Lexus RX 450h is more squat, with a wider track than previous models that makes it look a lot more like a station wagon than a crossover.

Antilock brakes and traction control come standard, as do 10 airbags. Front airbags for the driver and front passenger as well as knee-level airbags, side airbags, and side curtain airbags protect both rows of occupants. Optional safety features include a pre-collision system that automatically brakes when the 2011 Lexus RX 450h is moving too quickly relative to other traffic and a speed-sensitive cruise control system.

The 2011 Lexus RX 450h is a minor update for Lexus, offering a midsize luxury SUV that gets decent fuel mileage at the expense of some acceleration issues and regenerative braking feel. Interior and safety features make it a standout in the hybrid luxury crossover class, and savvy buyers will recognize the value of its class-leading interior capacity figures.

Users ranked 2011 Lexus RX Hybrid against other cars which they drove/owned. Each ranking was based on 9 categories. Here is the summary of top rankings.

Have you driven a 2011 Lexus RX Hybrid?
Rank This Car

WHY ISNT MY LISTING SHOWN

2011 Lexus RX450 Listing not being displayed. I listed it this morning, did all the confirmations, but it is not appearing on any CG searches on any of my devices

Dear Car Gurus, My Ad Never Was Seen On Your Website.

I have continued to lower the price and still never had a phone call or email or text from anyone. My prices have always been good, this car has a very good mechanical warranty is in excellent condi...

Hello, I just bought 2011 Lexus RX450h with 100,000 miles on it. I heard engine could be costly since it has two. Is there any regular maintenance you would suggest in order to have engine running...