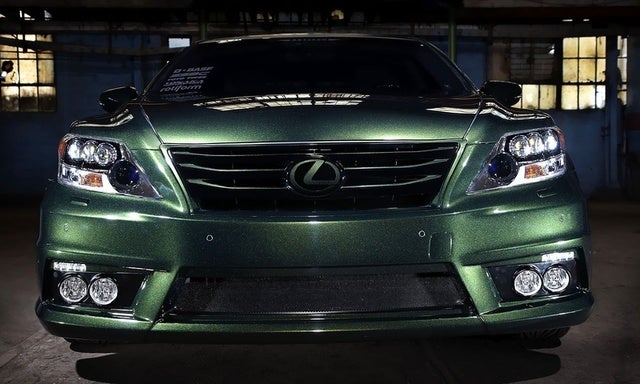 The 2011 Lexus LS 600h L is a hybrid luxury sedan that sits atop Lexus's product line, affording occupants and drivers the most expansive interior and features available from the Japanese automaker. It's the most expensive hybrid sedan on the market, costing more than the Mercedes-Benz S400, and while it strongly resembles the long-wheelbase version of the LS 460, there are several notable differences beyond the electric power assistance.

For example, while the LS 460 offers an optional self-parking system, on the 2011 Lexus LS 600h L it comes standard, as well as a power-flow meter for the driver to monitor and a 19-speaker Mark Levinson sound system. A voice-activated navigation system and heated steering wheel for the driver are standard as well.

Other notable standard features include a 16-way driver's seat and 12-way passenger seat, both heated and cooled, while the rear seats are heated and their occupants protected with a power rear sunshade. Like the Lexus LS 460 long wheelbase, the seating is expansive in the rear, with plenty of leather and wood trim.

The powertrain is where most buyers will find either a strong case for or the biggest strike against the LS 600h L. Adding a full-hybrid system increases peak horsepower to 438 horsepower, up more than 50 from the standard engine. Fuel economy is improved to 20 mpg in urban traffic and 22 on the highway with help from the car's continuously variable transmission.

Being a hybrid, the 2011 Lexus LS 600h L can be whisper quiet at a stoplight or during stop-and-go traffic, relying solely on the electric motor for short distances. But reviewers of previous models note that the increased power numbers aren't necessarily evident during spirited driving, a flaw compared to similarly expensive vehicles. Nor is the fuel economy demonstrably better than the LS 460's, except in city driving.

One other major quibble would be with cargo capacity, which suffers because of the hybrid components and comes in at just 10 cubic feet, smaller than some compact hatchbacks. Owners will likely need to keep some business accouterments in the spacious main cabin instead.

While there is little cargo room, option packages can make a normally sumptuous interior turn into one of the best in the ultraluxury class. The Premium Package offers ventilated and reclining rear seats, climate control for each occupant, and a rear entertainment system, while the Seating Package II offers a wood table, temperature sensors that control the rear temperatures, and power recliners for both rear seats.

The 2011 Lexus LS 600h L is the top of the line for Lexus and in many ways outshines its competitors in terms of interior amenities. While power isn't as good as sedans powered by V12s, prospective buyers looking for a little less environmental impact will be heartened by the LS 600h L's designation as a super-low emissions vehicle. A host of safety features including side and knee airbags for the front occupants, side curtain airbags for all occupants, and optional pre-collision systems also help provide peace of mind.