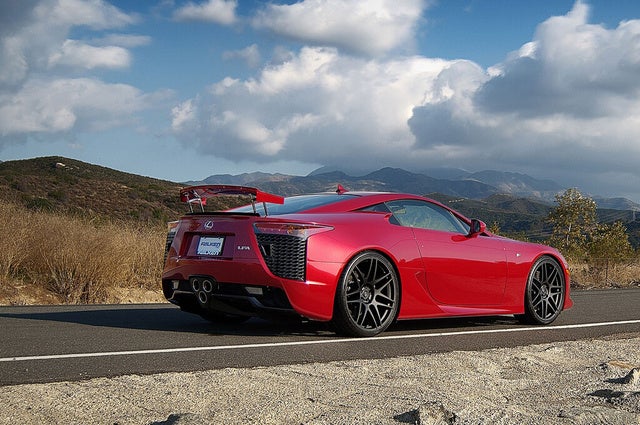 Looking for a Used LFA in your area?

CarGurus has 3 nationwide LFA listings and the tools to find you a great deal.

When asked why he would want to scale Mt. Everest, Mallory famously quipped, "Because it's there." Perhaps the same can be said for why Toyota has spent ten years, not to mention untold dollars, to develop its own version of the supercar – the Lexus LFA.

Standing for Lexus Future-Advance, the LFA fails to actually break much new ground or set records. Other cars, and not just supercars, are faster in a straight line and/or around a track, are lighter and certainly cost less than its $375,000 base price. But the LFA does have unique elements.

For instance – the LFA is a clean-sheet design, thought-up, manufactured and built almost wholly in-house. Toyota’s commitment to this principle can be best illustrated in its switch from an all-aluminum frame to a carbon-fiber-reinforced polymer chassis and body – developed and manufactured totally in-house. Now, Toyota claims the decision was made because of an inability to meet certain pre-determined design, performance and aerodynamic specifications using aluminum, but if that were true, why not outsource the construction – as so many supercar manufacturers are wont to do?

Instead, Toyota relied on its textile roots – over a century and a half of textile experience, believe it or not – and built its own rotary loom to impregnate the polymer with carbon fiber. It’s one of only two in the world currently, and with the laser quality control system Toyota engineered to check its work, it’s not difficult to conjecture future applications for this process.

I’m guessing this is a first step in Toyota offering more of the same materials in not just its super and luxury cars, but in more mass-produced quantities, at least more than the 500 scheduled LFAs.

Regardless of inspiration or intention, the execution is noteworthy, and the switch from aluminum to carbon fiber results in a stronger chassis that purportedly saves more than 220 pounds in final design. But as any auto enthusiast knows, it’s not just how much but where. Toyota took care to make sure the center of gravity was extremely low in the LFA, and this might be the most impressive part of the car. Tucked just under the steering wheel’s rim - not its center - is the vehicle’s 17-3/4” CoG. That’s right, the 20-inch forged aluminum wheels actually eclipse the car’s CoG by more than 2 inches.

Achieving this wasn’t easy, and several unique methods were used to achieve this limbo-ready figure. The LFA's F1-derived V10 engine uses a dry sump system that not only helps with prolonged cornering, but allows the engine to be mounted much lower in the engine bay, thanks to the lack of an oil pan. The use of a world’s-first offset gear mounted to the crank, thereby transfering power to the six-speed sequential gearbox via a torque tube, allowed the transmission to be mounted just in front of the rear axle, achieving a 48/52 weight distribution. This puts the car’s center of gravity damned close to your naughty bits, providing mid-engine balance with front-engine familiarity.

In fact, a lot of work went into that 4.8-liter V10 engine. Its cylinder block was cast at the same foundry that makes Toyota's F1 engine blocks, and features an individual, electronically controlled throttle body for each cylinder. It’s smaller than a V8 of similar output, weighs less than Toyota’s 3.5-liter V6, and still manages 115 hp/liter for a total of 552. While that figure won’t show up until 8,700 rpm, the engine also offers 354 lb-ft of torque, showing up at a more manageable 6,800 rpm.

Power delivery was actually a major concern during development, with low reciprocating mass being of primary importance. That was the impetus for choosing a V10 instead of a V12, and even influenced the decision to use a traditional H-pattern in the hydraulically actuated transmission, instead of a dual-clutch design. The result is an engine with a never-ending power curve that will jump from idle to redline in a pleasantly violent sixth-tenths of a second.

Yamaha designed the cylinder heads, just as it did for the original Japanese supercar, the Toyota 2000GT, and utilized titanium valves and connector rods and a magnesium cylinder head cover. But that wasn’t enough, and Yamaha decided to take a cue from Toyota and fall back on its roots – namely acoustics. The tuning forks you see in the Yamaha logo betray a legacy that began with piano and organ manufacturing, back when cars were still called horseless carriages. That expertise was harvested in order to "tune" the engine’s tenor via ribs in the intake manifold cover, resonating the powerplant’s dulcet tones through twin ducts connecting the manifold and firewall, channeling that sound into the cabin in harmonious tandem. The company claims it’s the same procedure used to tune the sound of an Ovation guitar, although the analogy isn’t immediately apparent.

Regardless, it sounds good.

I’d be lax to ignore the 15.4-inch front and 14.2-inch carbon ceramic brake discs, pinched by six- and four-piston Brembo calipers, respectively. And I’m sure there’d be complaints if I failed to mention the rear-mounted radiators – another nod to the weight-distribution gods. Truly, there’s a lot to mention about the LFA, and we’ve only gotten technical up to this point.

All of this ignores the fact that the LFA just looks damned good. The whole thing, inside and out, is a maniacal hybrid of "mecha" and "orga" that simply works. Angular ducts and fins and scoops meet sweeping lines and arches in a way that should clash but doesn’t. I’m not saying it’s a design for the ages, but it fits in nicely here in the early parts of our new century. The hand-assembled interior offers the same detailed attention you’d expect for nearly half a million dollars, with features like a digital thin-film transistor instrument display and a 12-speaker Mark Levinson sound system developed specially for the LFA with compact and lightweight components. A tunnel for the torque tube and exhaust bifurcates the cabin, separating the comfortable seats that provide more than enough support for the kind hooligan antics the car was designed to allow. No sense scrimping when 200 mph is an achievable goal.

But what was the goal for Toyota? Surely the company could use as much goodwill and positive PR as it can gather of late, but a Lexus-badged supercar isn’t going to do much in that category. Sure, there are an abundance of impressive and unique features in the LFA, but with only 500 examples being produced solely for the stupid-rich, it’s unlikely you’ll even see an LFA on the road, let alone get to enjoy one yourself.

However, with Toyota now in possession of both the expertise and the means to produce carbon-fiber chassis and body pieces in-house, and the rest of the low-weight tricks it learned in producing this unattainable supercar, the chances of the rest of us seeing some version of that magic in a less mythical vehicle increase substantially.

“Because it’s there?” Perhaps. But I can’t wait until it’s here.

David These 2 reviews are about as moronic as I've ever read. Clearly 2 people who will never own a supercar or understand why they are built.

Have you driven a 2011 Lexus LFA?
Rank This Car

Looking for a Used LFA in your area?

CarGurus has 3 nationwide LFA listings and the tools to find you a great deal.