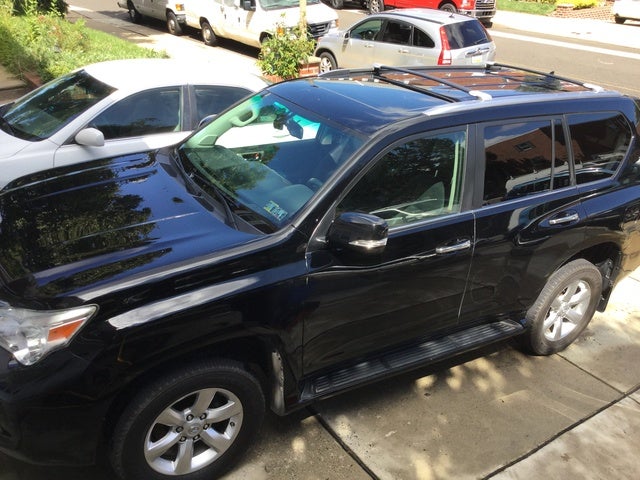 The 2011 Lexus GX 460 is a truck-based SUV with three rows of seating and a luxurious interior. However, last year's model took a significant knock in the public eye thanks to a rollover test that made national news and exhibited the GX 460's tendency to lean, a problem that potential owners should keep in mind.

That test showed potential handling issues for the GX 460, which is based on the midsize Toyota 4Runner. A lengthy body and soft suspension designed to improve handling led to the issues, which Lexus engineers say they have resolved.

It's a shame that's probably how most prospective buyers have heard of the 2011 Lexus GX 460, because its interior appointments are among the best in its class. They include leather seating and wood trim, with better fit and finish than some luxury competitors. While seven occupants fit in the standard configuration, the GX 460 has power-folding third-row seats for ease of access to the trunk area. Second-row passengers can recline and move their seats forward and backward to improve legroom.

These features mean the midsize GX 460 has a bit less cargo room than others in the class, at 46.7 cubic feet. And some reviewers of the 2010 version, which is the same except for cosmetic changes, have had issues with the height of the liftgate for stowing packages or baggage for trips.

Speaking of trips, the GX 460's 301-hp V8 engine gets 15 mpg in city driving and 20 on the highway. It rides softer than the Toyota 4Runner on which it's based, but can be noisy. Moreover, while the body lean that can lead to rollovers has been fixed, it still rides higher than even the larger LX 570, which can lead to buffeting.

Standard safety features include the new-for-2011 brake override system standard for all Lexus and Toyota vehicles. If the brake pedal is depressed, throttle inputs are cut off to prevent unintended acceleration. The Lexus GX 460 includes 10 airbags: front occupants get side curtain airbags, side impact airbags and front knee airbags in addition to two for frontal impact; the second row also gets side curtain and side impact airbags for the two passengers closest to the doors.

There are two trims, Base and Premium. 2011 Lexus GX 460 Premiums include three-zone climate control and power-folding mirrors for parking. While both Lexus GX 460s have heated front seats, the Premium affords the same luxury to the second row's outboard seats. The Premium trim also includes adaptive front headlights with high-intensity discharge bulbs.

An optional navigation system is available with a hard drive, and XM satellite radio is available for both trims, as is a 17-speaker Mark Levinson stereo system. The Premium can also be optioned with a pre-collision system that monitors nearby traffic and the actions of the driver to reduce the chance of collision.

The 2011 Lexus GX 460 is well-appointed no matter the trim chosen, but prospective buyers should test-drive it to see whether or not it fits all their travel and cargo-carrying needs as well.

Grover As an FJ and Tacoma owner, I'm highly impressed with this ride...It just makes you want to take long trips in the Rockies...

Users ranked 2011 Lexus GX against other cars which they drove/owned. Each ranking was based on 9 categories. Here is the summary of top rankings.

Why Are Lexus So Expensive

Why Is My Listing Processing For So Long?

My listing has been processing since Friday? Why so long???

How Do One Contact A Private Seller Apart From Sending A Request To Them An...

I am interested in a car and requested for interior pictures, seller eventually uploaded to cargurus and i requested to test drive and i am yet to get a response.

Looking For New Or Slightly Used Large (or Mid0size) Luxury SUV With The Be...

I have fibromyalgia and back issues. Currentlty driving a Nissan Armada LE which is a brutal ride for me. What do I look for in car descriptions to ascertain its ride. Shoiuld I look for air susp...

My seat got extremely hot and started smelling like it was burning. The only thing is now all it does is blow cold air from entire seat. Cannot be adjusted with cool/heat dial.