Lexus claims that the 2011 ES 350 offers an “interior oasis,” and with plentiful luxury, a smooth ride, and quiet comfort, it delivers in spades.

The trade-off for the 2011 ES 350’s cocoon of comfort seems to be a fun and exciting driving experience in the midsize sedan, whose options can dramatically increase its price. 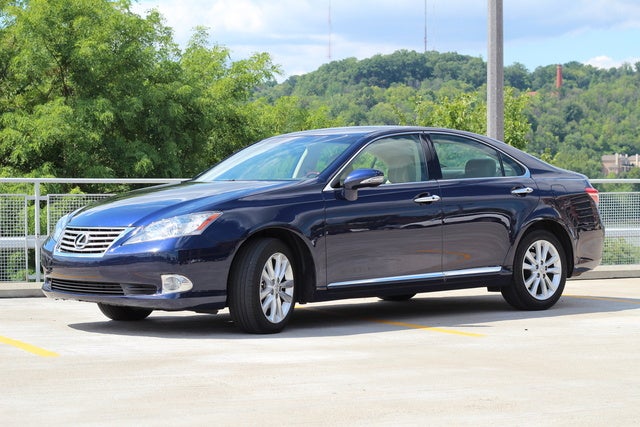 The 2011 Lexus ES 350 makes you reach for your thesaurus in search of new ways to say comfortable, quiet, and smooth-riding luxury. Although criticized for costly options and a lack of driving excitement, Lexus still provides an entry-level midsize luxury sedan with much to offer. With a high-quality, plush interior, a respectable list of standard features and strong safety ratings, most ES 350 buyers seem willing to forgive the lack of thrills in favor of the ride’s serenity.

With a restyle in 2010, the most significant change for the 2011 Lexus ES 350 is its engine—now retooled to use 87-octane regular unleaded gasoline, rather than 2010’s premium fuel recommendation. Although this slightly lessens power, Lexus promotes the change as a way for consumers to continue to enjoy the luxury midsize sedan’s smooth and quiet ride while lowering the cost of ownership. This seems an important point for Lexus to emphasize, given the fact that one of the few criticisms leveled at the ES 350 is the cost of options, which can quickly elevate the price.

Although some compare the ES 350 to a dressed-up version of the workhorse Camry (and it is built on the same platform as the Camry), there is no doubt that the ES 350’s outfit is one to be admired—both for its smooth, quiet and comfortable ride, and the luxury cocoon-like feel of the interior, with its high-end materials and admirable fit and finish. 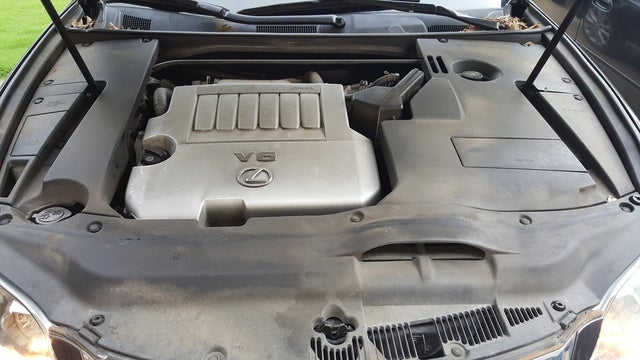 The front-wheel-drive Lexus ES 350 is available in only one trim and with one engine for 2011: a 3.5-liter V6 with Dual Variable Valve Timing with intelligence. With the change in recommended gasoline (from premium to regular), its power output has been reduced slightly, producing 268 hp at 6,200 rpm (down from 272 hp last year) and 248 lb-ft of torque at 4,700 rpm (down from 2010’s 254 lb-ft). The engine is paired with a 6-speed Electronically Controlled Transmission with intelligence, and generates EPA fuel economy estimates of 19 mpg city/27 highway, with a 0-60 time of 7 seconds. The engine and transmission reflect the overall ethos of the luxury sedan with smooth shifting and quiet operation. Although the engine may have relinquished some of its oomph, reviews still note that the sedan has plenty of acceleration, both from a stop and at highway passing speeds. 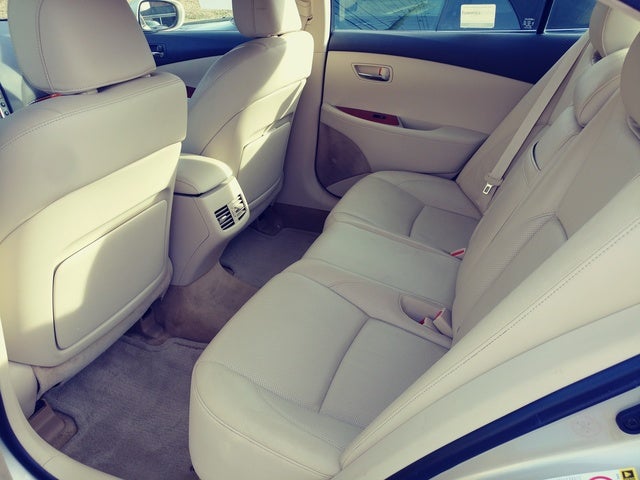 Reviews consistently comment that the ES 350 is not the car enthusiast’s car and that it makes no bones about the fact that the emphasis is on comfort and luxury over high-powered, intense driving excitement. On the upside, the suspension (front and rear independent MacPherson struts with stabilizer bars) creates a soft-riding experience that practically eliminates the sensation of any troubling bumps or roughness in the road. On the downside, however, the handling and steering give the driver little feedback from the road. The four-wheel power-assisted disc brakes are described as underwhelming, feeling soft during road tests’ simulated emergency stops, and taking 18 feet longer to come to a stop from 60 mph than competitor Hyundai Genesis. But most agree that consumers considering the Lexus ES 350 are not looking for sporty driving thrills, but rather the luxury sedan equivalent of a bubble bath—designed to transport driver and passengers in quiet, relaxing comfort.

There is little doubt that the 2011 ES 350 excels in cabin luxury and comfort, and Lexus even boasts that it has included 88 vibration-reducing measures to smooth out the ride and insulate the cabin from noise. The sedan seats five, with standard leather added for 2011. The front seats provide standard 10-way power adjustment and a memory feature for the driver’s seat, as well as optional heating and ventilation for the front and an available power adjustable driver’s seat cushion. The seats are generally described as sufficiently padded and supportive, and rear seat comfort is helped by an almost completely flat floor. While legroom is plentiful, however, taller riders may feel cramped by the available headroom. The rear seat includes a pass-through to the trunk, which holds 14.8 cubic feet of cargo. Although the trunk is spacious, consumers should note that the curved shape of the trunk hinges impacts the useable trunk space, and the shape of the opening can make loading bigger and bulkier items problematic.

The ES 350 comes equipped with a number of standard features, including a power glass moonroof, power windows, cruise control, power locks, push-button start and stop and the SmartAccess system (which uses sensors to detect the SmartAccess key fob and automatically unlocks the doors with the touch of a handle). The power tilt-and-telescoping steering wheel integrates the controls for the audio system, trip computer and multi-information display in the car, as well as voice control for the optional navigation system.

Other standard luxury touches include real-wood trim in the center console and doors in Walnut or Dark Brown Bird’s-Eye Maple. The dual-zone automatic climate control comes with an air filter and a smog sensor, which switches the system to a recirculation mode when pollutants are detected. Heated outside mirrors include integrated turn signals and puddle lamps, activated by the approach of the Smart Access key. An illuminated entry system provides lighting for the front footwells, front and rear seating, and the engine start button, and even front cupholders are illuminated. Rain-sensing windshield wipers and an auto-dimming rear-view mirror with a digital compass are also included as standard features in the 2011 ES 350.

Standard technology in the ES 350 includes the HomeLink universal remote, which allows users to consolidate other transceivers (e.g., garage, home lighting or security) to a single controller. Bluetooth technology allows for hands-free cell phone use and wireless music streaming, although a USB and iPod/MP3/WMA port is also a standard feature, as is a 90-day trial subscription to XM satellite radio. The entry-level stereo for the Lexus is an 8-speaker Premium Sound System with an automatic sound levelizer (which automatically adjusts the volume level to compensate for ambient noise interference) and an in-dash 6-CD changer.

The electroluminescent Optitron gauges are easy to read, and the standard multi-information display includes a trip computer that offers information about outside temperature, average speed, fuel consumption and system warnings, among others. In addition, an ECO driving indicator monitors driving behavior for fuel efficiency.

If these features are not enough, several options are available individually: 17-inch E-Sport alloy wheels, parking assist (which alerts drivers to the presence of objects near the front or rear bumpers and shows the distance in the multi-information display), a pre-collision system and dynamic radar cruise control and HID adaptive front headlamps. Other options are bundled into packages. The Navigation Package adds a hard-drive navigation system with voice recognition, a color 7-inch touchscreen and an integrated backup camera. It also adds a 90-day trial subscription to XM NavTraffic, NavWeather and Sports and Stocks, as well as a one-year subscription to the Lexus Enform system with Safety Connect, providing additional navigation assistance, as well as roadside and emergency assistance. The Navigation Package can also be purchased with an upgraded stereo option, adding a Mark Levinson 14-speaker Premium Surround Sound Audio system with a 6-DVD/CD changer with DVD playback capability on the navigation screen (only when the parking brake is on). The Ultra-Luxury Package upgrades the leather seats to semi-aniline, as well as adding a power rear sunshade, passenger memory system, a full glass panoramic roof, HID headlamps with adaptive front lighting system and a Liquid Graphite finish on 17-inch, 10-spoke alloy wheels.

Optional features can supplement the standard safety lineup. An available backup camera improves rear visibility, while optional HID headlamps with adaptive front lighting (which swivels the headlights in the direction of a turn) can help to illuminate the road ahead. Dynamic radar cruise control maintains a safe distance from a car ahead when using cruise control. Additionally, in the event of an unavoidable crash, the pre-collision system can reduce damage by retracting the front seat belts and preparing the brake-assist feature to increase braking power. Active braking can also apply the brakes if the driver does not react to the system’s warnings.

The National Highway Transportation Safety Administration (NHTSA) has not yet tested the 2011 Lexus ES 350, but the similarly equipped 2010 model earned five (out of five) stars for front crash tests and side driver tests, and four (out of five) stars for side rear passenger tests and rollover tests. Although the Insurance Institute for Highway Safety (IIHS) did not include the Lexus ES 350 on its 2011 Top Safety Pick list, it had not conducted a roof strength test on the vehicle (a necessary score for inclusion on the list). Front and side impact crash tests did earn the IIHS’s top grade of Good for 2007-2011, however. 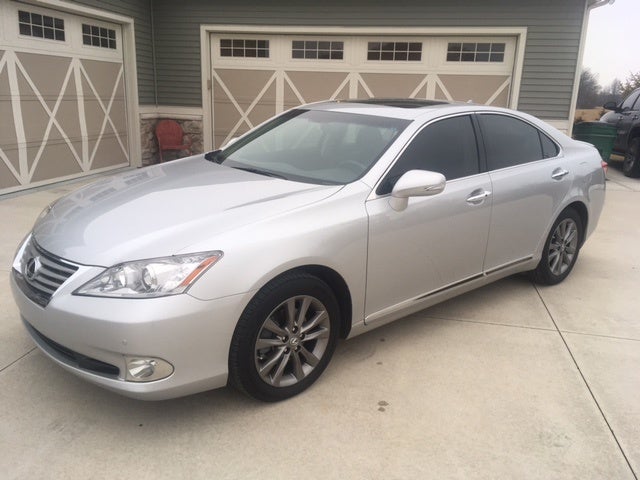 Owner reviews concur that the Lexus ES 350 is not a rough-and-tumble sport-oriented ride. Like the expert reviews, some owners give the ES 350 low marks in the “fun-to-drive” category (one owner even comments that she must be too young for this car). But even given that fact, consumers seem consistently amazed by the smooth ride, fuel economy, and luxury feel. Consumer reviews of the almost-identical 2010 Lexus ES 350 commend the sedan’s performance, its smooth and responsive handling and power adequate for everyday use. Owners commend the easy comfort of the midsize sedan, even comparing it to a couch on wheels. Several owners also noted the ES 350’s good fuel economy, in addition to its style and list of standard features. While most owners recommended the car unconditionally, some did criticize features available only as options, which some owners felt should have been standard for the price of the vehicle.

Users ranked 2011 Lexus ES 350 against other cars which they drove/owned. Each ranking was based on 9 categories. Here is the summary of top rankings.

How To Reboot Lexus Nav System

Can someone please help me figure out this problem? I got stuck in snow and I had to rock my vehicle out. Nothing was wrong no check engine light or anything, the next morning I get up to go to wor...

I've had the codes pulled on the car and it apparently it's not as easy or as simple as it has sounded in some of the answers so I did the in plug the battery thing to reset the lights after I c...