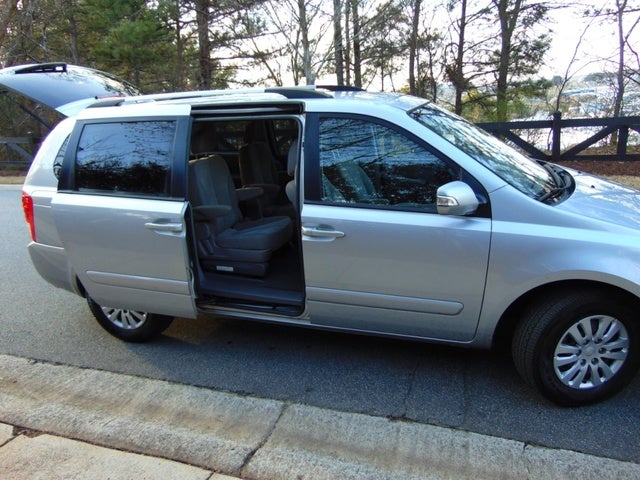 The 2011 Kia Sedona offers you the safest minivan on the market with tons of storage and space for a very accessible price.

The 2011 Sedona's handling is competent at best and disturbing at worst, and best-case-scenario fuel mileage of 23 mpg simply fails to impress anymore.

The Kia Sedona was always a low-cost alternative to competitors like the Toyota Sienna and Honda Odyssey. The fact that it was the safest of the bunch and had the lowest cost of entry didn't hurt, either. In the end, it never really caught up to the competition, though, and as industry changes signal the death of the minivan, the time was never really right for the Sedona.

A carryover model in its last year of production, the Kia Sedona doesn’t have much new to offer in 2011. Sure, there’s been an upgrade to the stereo, swapping the cassette for an auxiliary audio input, and some new stitching on the seats, but otherwise the caboose’s lament for this muscular minivan will be a whisper rather than a wail.

In production since 1998 – in some markets as the Carnival – the Sedona has been Kia’s middle minivan for more than ten years and its first model to see mimicry from another manufacturer, namely the rebadged Hyundai Entourage. This seven-seat, FWD minivan comes in LX and EX trims, both powered by a 250-hp, 3.8-liter V6.

The Sedona features a not-unimpressive all-aluminum 3.8-liter V6 that offers a maximum towing capacity of 3,500 pounds. Its 250 horses become fully available at 6,000 rpm, while its 253 lb-ft of torque show up at 3,500. It’s not the best setup available, but it’s more than adequate for mild towing and general brood-hauling. While the Sedona is capable of sub-8.5-second 0-60 times, it feels slower than it is, with its five-speed shiftable automatic often reluctant to downshift, even at full throttle. This can frustrate during highway passing and climbing despite having an engine that should have little problem with either.

The EPA estimates the Sedona at 17/23 mpg on regular-grade gasoline, but owners and testers alike have found it difficult to reach either extreme. The five-speed “manumatic” does make power delivery from the 3.8 Lambda engine a bit more interesting and accessible, but it’s a shame these issues need to be overcome at all. This is the same engine, albeit detuned, found in the Hyundai Genesis Coupe after all, and that’s a car that doesn’t seem to lack for power or fun at all.

While the Sedona can’t offer luxury-car comfort or sports-car handling, its composed ride is competent enough on the highway, if a bit unnerving over larger bumps. The long wheelbase of the LX and EX trims offers competent composure on the long haul, but the 17-inch wheels on the EX negate any benefits with a noticeable increase in harshness over rough road.

Expect the usual barge-like characteristics enjoyed by minivans, displayed with relish here. Corners attacked with any sort of bravado result in pronounced lean and roll, but staying calm will result in nothing more than a typical van ride. As the crossover culture continues to conquer car commerce, this kind of handling simply becomes less and less tolerable. As this is the last year for the Sedona, we won’t have to tolerate it much longer.

It seems Kia was frightened to take any chances here, as the interior of the Sedona does little to offend or comfort. Hard plastics dominate the cabin, but fail to really hurt the overall feel, complemented as they are by some soft surfaces and fake grain. Controls are an ergonomic delight, with little complication in either location or operation, but aren’t particularly stylish or attractive. They aren’t unattractive by any means, but just simply there. The one exception would be A-pillars, which are thick enough to disrupt vision to the front corners. Frustrating.

Sound is ample, both from the engine and from wind and tire noise that never seems to go away. While the engine noise isn’t especially annoying, and can even have an aggressively pleasing growl to it, the tire surface noise seems to become ever more unsettling, ubiquitous as it is. Seating is ample, comfortable, and supportive, although those with legs longer than 30 inches will likely want to push the driver’s seat back farther than it can go.

After 2006’s redesign, the IIHS awarded the Sedona its Gold Top Safety Pick, making the Sedona the safest minivan they’ve tested. Thanks to standard antilock four-wheel disc brakes with brake assist, an antiskid system, and six standard airbags, the Sedona has also earned a five-star rating from the NHTSA in all test categories excepting rollover resistance, in which it earned a four-star rating.

Owners seem impressed primarily with the Sedona's price, offered at a discount over rivals. Still, the savings are evident in a lackluster transmission and an interior that makes little effort to impress, even when its intention is exactly that. Safety is a huge plus, as buyers love to know they’ve spent so little and gotten the best they can buy, however the negatives do weigh, as there are near-constant comments about what the competition does better. Comfort at least is not an issue for those under 6 feet it seems, and overall the Sedona has been a worthwhile addition to the Kia fleet.

moonrunna The sliding doors have electrical problems and fail to work.

Users ranked 2011 Kia Sedona against other cars which they drove/owned. Each ranking was based on 9 categories. Here is the summary of top rankings.

Have you driven a 2011 Kia Sedona?
Rank This Car

My Rear A/C Is Working, But Front Does Not Work.

When it started acting up initially, it blew cold air only when the fan was on high but now its not working at all. When the fan is NOT on high (1,2,or 3), the A/C button LED is lit, but no air com...

In less than a year I have changed the alternator 7 times, the first 6 were bought in auto zone and advance stores, but the last one is original and was the one that lasted the longest 4 months .....

173 views with 2 answers (last answer about a year ago)

Battery and Break light come on and off some days (not All). Been going on for 2 months. We did replaced 2 battery's and 2 alternators about 3-4 months ago after the car completely died. Brought in t...

115 views with 4 answers (last answer about a year ago)

I've replaced the alternator twice in 4months. A couple days ago lights started displaying again. Battery and brake. This time the fuse was checked and the grease had disolved. Replaced grease. It...