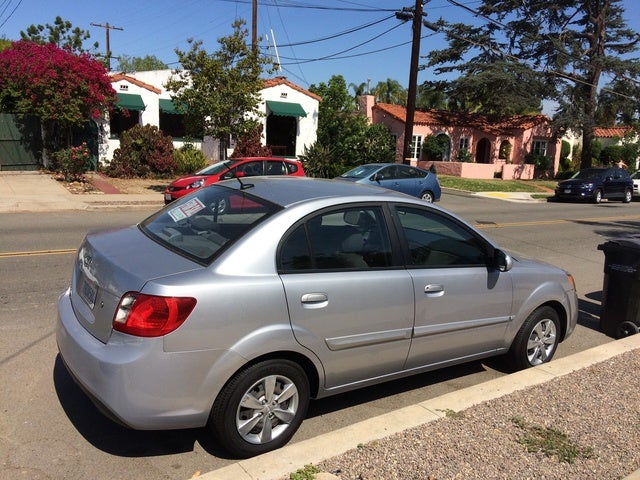 The 2011 Kia Rio offers economy both in regard to fuel consumption and leverage on your wallet without sacrificing quality.

The 2011 Rio's unrefined engine, cramped seating, and lack of standard safety features can induce buyer’s remorse even in the best deal in the subcompact class.

While the 2011 Kia Rio doesn’t offer much, what it does bring to the table shows up with class and quality for the most part. The engine is a striking exception here, and while it performs adequately, it does so with a lack of refinement that severely impacts enjoyment. That said, the overall package is still a great deal for the cost, and the Rio will serve as a more than competent urban creeper. (Also, this is the last year for the Rio, so collectors take note.)

The Kia Rio, a front-wheel-drive four-door subcompact, got a midlife refresh last year that provided for mostly visual changes. Its five trim levels of Base, LX, SX, and hatchback Rio5 LX and SX are all powered by the same 1.6-liter inline four-cylinder engine. Base trims get a five-speed manual transmission that was previously standard for all trims, but for 2011 a four-speed automatic is the standard transmission for the LX and SX trims.

The Rio was originally a replacement for the Pride and Avella – the former a rebadged Ford Festiva. Since the Rio’s second-generation redesign in 2006, it has been based on a modified version of the Hyundai Accent platform. 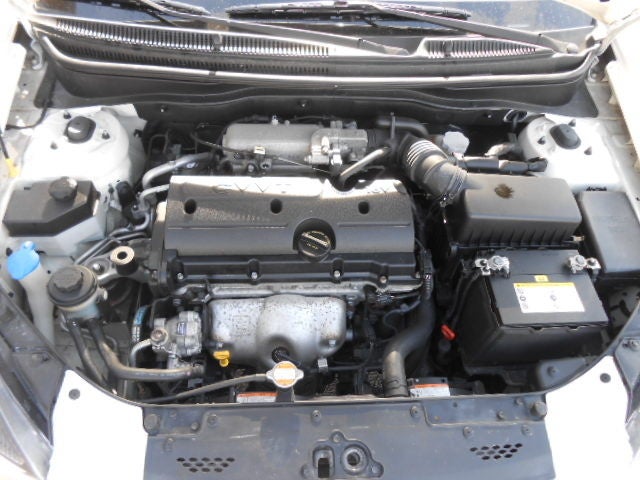 The Rio features a starved 110-hp, 1.6-liter inline four that can barely manage to crack 10 seconds on its way to 60 mph and does little better on the highway. It’s part of the Hyundai Alpha family of engines, the first to be built in Kia’s home country of Korea. It’s an iron block with aluminum heads that offers DOHC operation with 4 valves per cylinder and multi-port fuel injection.

The engine is loud, however, at nearly any rpm and only gets more raucous as the revolutions climb. It’s neither pleasant nor subtle and seriously detracts from driving enjoyment. The five-speed will return an EPA-estimated 27/32 mpg, while the four-speed drops a bit around town but gains some on the highway for 25/35.

As with any subcompact, you can expect a certain amount of jostling and jarring movement when things get rough. The Rio is generally capable, especially around town, but you’ll feel every single pothole. On the highway, if you can break some of your attention away from the screaming engine, you’ll notice that even road seams resonate throughout the cabin and steering wheel. Hard cornering will also bring out some uncomfortable noseplow, although some testers have noticed this is controlled better in the SX – a curious observation given the suspension is identical regardless of trim. The SX does get 16-inch alloys instead of 14-inch steel wheels and a spoiler as well, so perhaps this accounts for the difference.

Only the LX and SX trims come with power-assisted steering, so take into consideration what you’re giving up with the Base trim, including antilock brakes.

You honestly shouldn't be expecting a lot when you buy a Rio, and you’re not going to get a lot. The controls are simple but easy to operate, and the interior is constructed wholly out of hard plastics. That said, it’s not assembled haphazardly, and hard plastic doesn’t automatically mean cheap hard plastic.

The seats are quite comfortable, if a bit firm, although only if you fit into the “average” demographic. Drivers with some extra height or breadth will find the seats lacking in many ways, and rear occupants had best be on the smaller side as well, especially if there’s an adult occupying the seat directly in front of them, as legroom is precious and sparse. Best to stay away from the back seat altogether if you’re of adult size. The hatcback Rio5 trims don't offer much more in the way of occupant room, but cargo space increases significantly. With the seats up, 15.8 cubic feet of cargo space is yours to play with, as opposed to 11.9 in the trunk of the sedan, but if you drop the split-folding rear seats, capacity jumps to over 50 cubic feet in the Rio5, destroying its competitors.

There’s a lot of noise as well, from the wind, from the tires, and from the engine especially – although the latter can be alleviated somewhat with the automatic transmission. However, for all the shortcomings of the Rio, it still feels like a great deal for the cost, matching cars with a larger pricetag.

Safety is a touchy subject with the Rio. While Base trims come with dual front, front-side, and curtain-side airbags, you’ll miss out on antilock brakes and power-assisted steering, both unavailable as either a standard or optional feature for the entry-level trim.

There’s no shortage of complaints to be had about the Rio, whether it be for abysmal acceleration from an unrefined and underpowered engine, a lack of standard options and safety features, or a suspension that seems determined to announce every little imperfection. However, owners seem reluctant to complain much, perhaps placated by a price of entry that barely makes it into the low teens. For all these complaints, the Rio is truly a competent example of a subcompact city car. It offers high fuel economy, high quality for the cost, and a high cargo capacity in the LX and SX trims. Special note should be paid to the controls – they’re simple, they’re intuitive, and they could serve as a great example to more-expensive manufacturers that seem to think complexity is a recipe for success.

Users ranked 2011 Kia Rio against other cars which they drove/owned. Each ranking was based on 9 categories. Here is the summary of top rankings.

Key Will Not Turn Ignition

Put my key in. It will not turn at all. What is wrong with it?

I recently replaced my ignition could while under warranty and then 4 months later had to replace again. Dealership said I need to replace plugs. I can't believe Kia would put cheap 30k mile pl...

i have a kia rio 2011 while driving the speedometer fluctuates badly then dropping to 0km/h, powersteering comes so sensitive and sometimes during fluctuation the engine stalls,even diagnose with co...

All of a sudden, the key won't turn in the ignition. It goes in, and turns to the first click, where the radio and stuff can turn on. But it won't budge from there. I've tried all of the obvious solut...