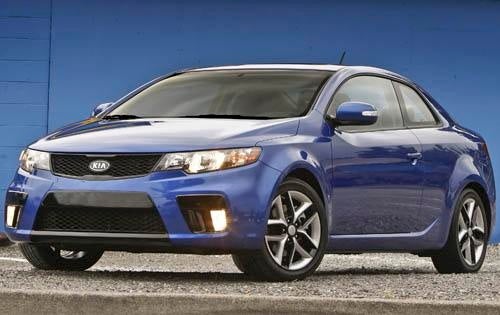 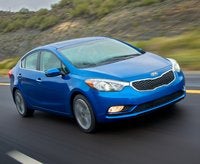 Strong transmissions, great value and an abundance of space make the 2011 Kia Forte a worthwhile option in its class.

Lack of refinement unbalances the scales in favor of competitors, with too much road noise, too much engine noise and an unrefined suspension setup in the 2011 Kia Forte.

While some manufacturers are content to linger with obvious drawbacks plaguing their products, Kia has not demonstrated this type of thinking. Yes, sunlight is the best disinfectant, and one can only assume that Kia will attack the Forte’s shortcomings with the same passion they’ve shown to date. No, it’s not a Civic or a MAZDA3…yet. However, the Kia can provide almost as much fun, just as much utility and plenty of features for less money with a better warranty. In that respect, it’s a good thing it’s not a Civic.

Two years in, and it’s time for a new Forte. With attention paid to drivetrain, suspension and overall comfort, 2011 was shaping up to be a big year for the Kia compact. With the additional arrival of the new 5-door hatchback version, it’s gotten even bigger. Without a compact hatchback in its lineup, Kia was left with a gaping hole in its offerings, easily filled by competitors like the MAZDA3 or the Golf. While the new Forte hatchback fails to meet or exceed the standards set in this highly competitive segment, it’s a fine addition and one that is sure to improve as Kia itself continues to improve.

We tend to give Kia a lot of slack, seeing as they’re trying so hard and offering such attractive warranties for such little financial commitment. It’s nice to root for the underdog, after all. But as we remember from our history lessons, Toyota and Honda used to be underdogs, too, and look how they grew up. 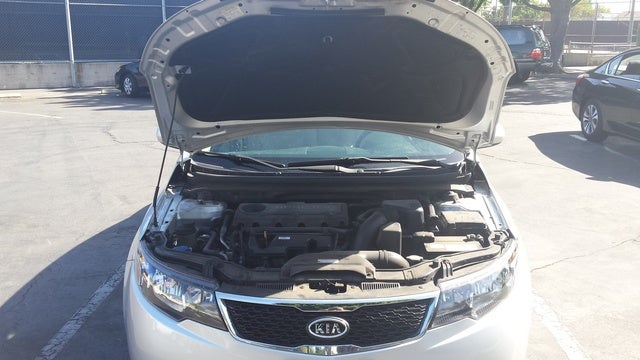 News about the 2011 Kia Forte will be dominated by the arrival of hatchback versions, but the best improvement this year is the introduction of 6-speed automatic and manual transmissions to replace 4- and 5-speed units that were holding the model back in terms of operation and performance. Both 6-speed transmissions perform with smooth precision through both the clutch and shifter action, bringing large improvements to the overall driving enjoyment of the Forte. Again, it’s not the same as the Civic or the MAZDA3, but it’s a lot closer.

The Forte is available in LX, EX and SX trims in sedan form and EX and SX trims in the 5-door hatchback. LX and EX trims are powered by a mostly gutless 2.0-liter, 156-hp engine. Full power doesn’t even arrive until 6,200 rpm, and its torque backup of 144 lb-ft shows up only 1,900 rpm sooner. It’ll motivate fine around town but is sluggish from a stop and struggles at speed with an unpleasant harshness. With the new 6-speed automatic transmission, it’ll at least achieve a 26/36 mpg rating, with the manual clocking in at 25/34. There’s also an optional Fuel Economy Package for the EX that will add electric steering, low-rolling resistance tires and aerodynamic enhancements that up overall fuel economy to 27/37 with the 6-speed auto. That’s a lot of change and sacrifice for just 1 mpg on both ends.

SX trims do much better with their 2.4-liter, 173-hp engine, and when choosing the 6-speed automatic, the SX also gets paddle shifters to increase the fun even further.

Unfortunately, a lot of the Forte's added enjoyment is robbed again via the uninspired suspension on the LX and EX trims. While the SX gets refinements this year that take away much of the harshness experienced previously, the LX and EX languish with the same lackluster setup that should lead most potential buyers away. The SX’s sport-tuned suspension, on the other hand, holds the line firm while still soaking up most bumps and irregularities without the harsh reverberations felt in previous years. Its 17-inch alloys help hold the road as well, and while the steering is weighted appropriately at speed, it can get a bit heavy around town.

But really, we all want to talk about the hatchback. It debuted at the New York International Auto Show last year sporting the new grille and fascia that has spread to the rest of the line. It also showed off new alloys, a redesigned center console, push-button start and the navigation system that is to be made available throughout the stable. While utility is certainly up with the addition of the hatch to the Forte repertoire, it unfortunately highlights one of the Forte’s weak points – a disturbingly noisy cabin. The sedan is already a cacophonic catastrophe, and the open-air design of the hatchback only magnifies this weakness, despite Kia’s attempts to mitigate.

The 2011 Kia Forte has been awarded a 4-star rating from the National Highway Traffic Safety Administration (NHTSA) thanks to features like dual front, front-side and curtain-side airbags, assisted 4-wheel antilock discs, traction and stability control and front-seat active head restraints.

Owners are impressed with the versatility and affordability of the Forte, especially in comparison with the competition. They are, however, aware of the shortcomings of the model, and complaints about noise, noise, and noise can be heard with increasing frequency. A major point of consternation involves the ride, with a wealth of interior space and comfortable seats that are hampered by suspensions that rob most of the enjoyment out of travel.

GuruVRYPV 2011 and 2012 with 2013 are great vehicles, designed solid, good ratio value to quality, not over engineered, however thin can build. I like those vehicles because they do not have refrigerant 1234yf which is 10 x more expensive vs 134Ra....

Users ranked 2011 Kia Forte against other cars which they drove/owned. Each ranking was based on 9 categories. Here is the summary of top rankings.

Have you driven a 2011 Kia Forte?
Rank This Car

The Measurement Of The High Pressure In The AC, Gives Me Lower

Hello, the room temperature is 26 degrees. The manometer and a half the following measures: Low pressure: 29 psi High pressure: 115psi I have read that the normal pressures are: low pressure: 25 - 4...

Is The Check Engine Light Related To The Electrical System?

Hi there, I changed the headlight in my wife's Kia. To do so I had to remove the battery as it was blocking access to the headlight. I replaced the battery but I dont think I tightened the termi...

What Happens If I Disconnect The Harness From The Throttle Body

Has Anyone Had A Problem With Sudden Or Involuntary Acceleration On The Kia...

We are currently in contact with a representative from the Kia corporate offices and they say they have had no recalls or prior reports of sudden acceleration on any of their vehicles. From the post...

Radio Nor Any Audio Works In 2011 Kia Forte