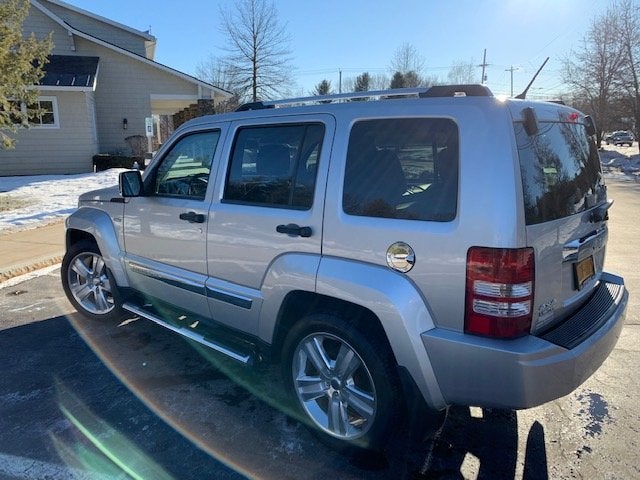 Poor gas mileage, rude road manners, a tepid V6, and a dated four-speed automatic, as well as skimpy standard features and a cramped rear seat, conspire to rob the 2011 Liberty of its potential.

For those planning to take the scenic route up the nearest mountain, the 2011 Jeep Liberty could be the ride of choice. If, however, the destination is the mall or the office, then take just about anything but the Liberty. Its off-road advantages simply can’t overcome its plebian cabin and uncivilized road manners.

Essentially unchanged from 2010, the 2011 Jeep Liberty five-passenger midsize SUV may remind drivers more of the Dodge Ram pickup than the Chrysler 300. This truck-based ute is a veritable beast off-road, but not so special when tooling along the highway, unless you’re hauling a trailer. Unfortunately, this smallish SUV can’t even brag about neck-snapping acceleration or snappy handling. But it does have the rugged good looks of a mountain man forced to hang with the beautiful people, while some less-than-pleasing interior materials and a gas-gulping V6 engine cohabitate with a respectable, if not jaw-dropping, 64 cubic feet of cargo space and a decent if not exactly posh ride.

The rugged but rude 2011 Liberty is delivered in three trims, the base Sport, off-road dedicated Renegade, and the almost plush Limited. Both the Sport and Limited trims come with standard rear-wheel drive (RWD), but each is also available with on-demand four-wheel drive (4WD). The Renegade is delivered only in the on-demand 4WD configuration and also gets the SelecTrac II system, which lets the 4WD be engaged even while travelling on dry pavement, an advantage the Sport and Limited trims, with standard CommandTrac, don’t posses. All is not lost, however, as the SelecTrac II is available with either trim in their 4WD configurations.

The 2011 Liberty, alas, puts up a relatively poor showing in a market that teems with more-refined, less-expensive vehicles. For instance there’s the Chevy Equinox, Toyota RAV4, Honda CR-V, Nissan Xterra, Kia Sportage, and Subaru Forester, to name but a few. Though none of the competition is quite as adept at tackling a mountain trail, all beat the Liberty, hands down, in outright highway prowess. 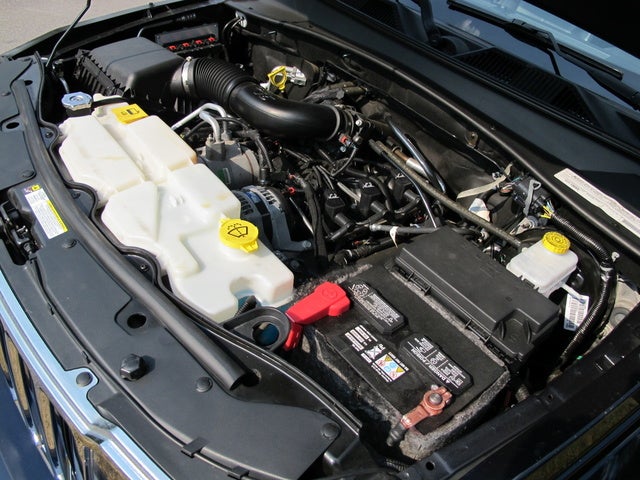 A single engine graces the 2011 Liberty lineup. This 3.7-liter V6 is matched to an anachronistic four-speed automatic transmission for 210 hp at 5,200 rpm and 235 lb-ft of torque at 4,000 rpm. Deceleration fuel cutoff, where fuel supply to the engine is shut off when slowing down, is perhaps a concession to the Liberty's lack of variable valve timing, yet seems not to mitigate a rather tepid (and that’s being generous) 16/22 mpg in RWD trims and 15/21 in 4WD versions. However, this gluttonous V6 will tow some 5,000 pounds of trailer when properly equipped with the optional towing package. The Liberty’s part-time 4WD, with both Command-Trac and Selec-Trac II available, is managed with electronic hi-lo gear selection and auto-locking hubs, backed up by the four-speed automatic’s hill descent control and brake hill-holder. An auxiliary transmission fluid cooling system is also standard across the lineup.

Virtually all reviewers describe the Liberty as pokey off the line, as well as far from fuel efficient. Highway merging and passing with the V6 are noted as challenging, while its 0-60 time is a rather casual 9.5 seconds. The four-speed automatic is considered smooth and reliable by most reviewers, but demonstrates a certain reluctance to downshift without putting the pedal to the metal – literally. Numerous reviews also mention an unpleasant racket from the V6 under heavy acceleration.

The 2011 Liberty Sport and Renegade trims ride on 16-inch tires, while the Limited boasts 17-inch tires. All trims, meanwhile, are equipped with standard alloy rims. The front short and long arm independent suspension is complemented by front and rear sway bars and a solid live axle rear suspension. Though both the Sport and the Limited are delivered with all-season radials, the trail-savvy Renegade comes with standard all-terrain tires, as well as skid plates protecting the differential, gas tank, transmission, and cooling system.

Most reviewers have no serious complaints about the Liberty’s ride quality. Bumps and broken pavement are felt, certainly, but not with any undo harshness. The Renegade, in its mission as a dedicated off-road predator, can be expected to ride a tad stiffer than its somewhat less rough-and-ready siblings. Steering is described by virtually all reviewers as vague, with noticeable body lean in hard turns. A distinctly unattractive tire squeal is also noted in even moderate turns. A few reviewers note a somewhat ponderous brake pedal feel, with panic stops resulting in a pronounced, though momentary, nosedive. 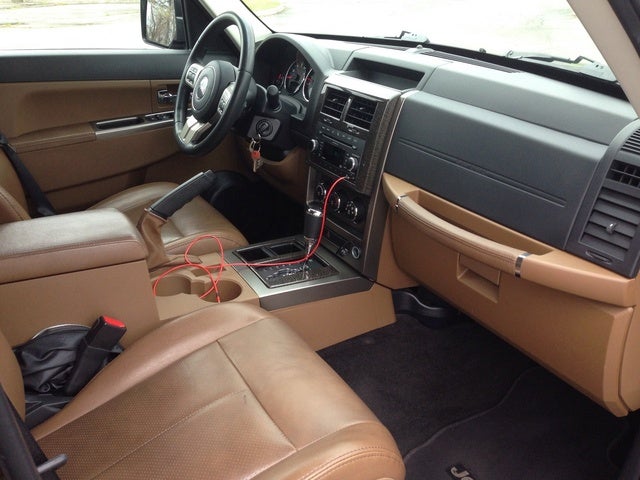 Options for the 2011 Liberty include a power-operated glass sunroof or the highly touted Sky Slider power-opening full canvas roof, as well as a Class III trailer towing package, with trailer sway control, across the lineup. Speed control, all-terrain tires, side steps, and splash guards are available for the Sport and Limited trims, while a universal garage door opener, a 30-gigabyte hard drive, voice-activated GPS navigation, and Sirius traffic subscription are available for the Renegade and Limited trims as part of the Media Center Package. Finally, the Liberty Renegade and Limited are available with automatic climate control, UConnect hands-free communications technology, Park Sense rear parking sensors, and remote engine start. The Renegade is additionally eligible for leather-trimmed upholstery, with the Limited qualifying for 18-inch chrome-clad wheels.

Even when considering the 2011 Liberty’s well laid-out dash and controls, with easy-to-read gauges and well-placed controls and buttons, professional reviewers note far too many hard plastic surfaces for comfort. A few reviews seem ticked that all three trims tempt drivers with buttons for the UConnect system, even when this option isn’t selected. Virtually all reviewers, however, concede that this midsize ute offers a good amount of cabin space and seat comfort for a trail-rated vehicle, though acknowledging that cabin storage, not to mention rear-seat legroom, is at a premium.

The National Highway Traffic Safety Administration (NHTSA) is in the process of re-designing testing criteria for all vehicles sold in the U.S. and has data for only a limited selection of 2011 autos at present. For the nearly mirror-image 2010 Liberty, however, the NHTSA awarded five stars for front and side impact testing, but only three stars for rollover protection in both RWD and 4WD versions.

In testing by the Insurance Institute for Highway Safety (IIHS), the 2011 Liberty fared better in rollover testing, gaining its best rating of Good, but side impact tests resulted in a rating of Marginal, the organization's second-lowest score. The IIHS also rated the Liberty as Good in front impact protection.

As seems traditional with many Jeep products, a deficiency in fuel efficiency topped the list of owner if-only’s for the 2011 Liberty. Its harsh ride and many inferior cabin materials, as well as some sub-par interior workmanship and a lack of true cruise control, also left more than a few owners a bit frustrated. Over-abundant downshifting is common with the four-speed automatic transmission, a fact that many owners picked up on immediately with the Liberty, in all configurations, with more than a few wondering when a six-speed transmission, either automatic or stick, will be available.

On the positive side, however, owners laud this midsize SUV’s off-road competitiveness and rugged profile. True on-demand four-wheel-drive traction on snowy highways was mentioned positively by a few owners, as was the surprising interior space for such a small ute. Finally, most owners appreciate the Liberty’s trailer-towing characteristics, feeling this adds immeasurably to its overall utility.

Have you driven a 2011 Jeep Liberty?
Rank This Car

AC WORKS GREAT, NO HEAT at all, ONLY BLOWS OUT ON DEFROST AND VENT ONLY in AC mode and no heat.?.?.I have new coolant, no leaks and is full, repair shops want to take you for a ride all the time and a...

Have a 2011 Jeep Liberty Limited, and can't get the tail lights to go off. After long rains, woke up and battery was dead. Replaced battery, and now tail lights won't shut off unless battery is dis...

What Years Are Compatible With A 2011 Jeep Liberty

What years are compatible with a 2011 jeep Liberty as far as front end collision replacement parts.