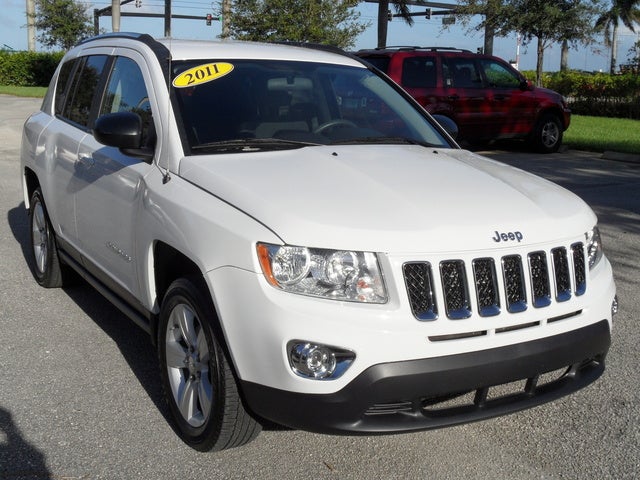 Like much of Chrysler Corporation's model portfolio, the Jeep Compass compact crossover sees significant revisions for 2011. With a fresh new face, a deluxe interior and suspension improvements, the 2011 Jeep Compass at least now stands a chance against the world-class competition in the cutthroat mini-SUV market.

Borrowing styling cues from its bigger brother, the Grand Cherokee, the 2011 Compass cuts a more rugged figure than most small crossovers. With the company's trademark seven-bar grille smoothly integrated into a glitzy new front fascia, the Compass stands out. LED tail lamps and restyled alloy wheels complete the look.

Also new is the Compass' interior. Once a blocky, boring sea of unyielding plastic, the cabin now features soft, low-gloss surfaces and modern contours. Controls are logically placed, and the instrument cluster is refreshingly straightforward. Though most definitely a compact SUV, the 2011 Compass' sculpted seat backs and angled bench permit relative comfort for adults.

Under the skin, improvements to the 2011 Compass are more subtle. While the chassis benefits from revamped suspension geometry and added sound deadening, the Compass' two four-cylinder engines carry over unchanged. The base power plant is a 2.0-liter inline four, derived from Chrysler's global GEMA architecture, that drives the front wheels. Though smooth and modern, the 2.0-liter's 158 hp and 141 lb-ft of torque can't help the Compass feel sprightly. Four-wheel-drive and Limited versions get a larger, 2.4-liter four-banger that makes a more respectable 172 hp and 165 lb-ft of torque.

A five-speed manual is offered in the basic Sport trim, but most 2011 Compasses will come equipped with a CVT automatic gearbox that can more widely vary the ratio spread for optimum economy and performance. The four-wheel-drive system still doesn't have a heavy-duty transfer case, but a new off-road package adds skid plates, a computerized low-range and all-terrain tires to give the 2011 Compass at least a modicum of Jeep-ness.

Handling and ride quality are incrementally improved, though in this category the 2011 Compass still lags behind the competition. New spring rates and stiffer dampers sharpen things up a bit on-road, but the Compass still howls in protest when pushed hard. While the steering is nicely weighted and delivers decent feedback, the nose-heavy body suffers from persistent understeer.

Safety features in the 2011 Compass include front, side and curtain airbags, active head restraints and an electronic roll mitigation system. Four-wheel disc brakes are standard on all but the most basic trim and feature antilock control. Though the 2011 model hasn't been evaluated according to the Government's new metrics, last year's Compass earned four stars for frontal impact protection in the NHTSA's crash test.

Users ranked 2011 Jeep Compass against other cars which they drove/owned. Each ranking was based on 9 categories. Here is the summary of top rankings.

Have you driven a 2011 Jeep Compass?
Rank This Car

Back End Kicks Randomly, And Over 50 Mph Shaking In Steering Wheel

Hello, I have a 2011 Jeep Compass Latitude. I will randomly be driving and my back end kicks and acts like the tires can't grab the road. Also, when I go over 50 mph my steering wheel shakes like cr...

Jeep Cranking But Not Starting

what would cause my jeep to not receive power to my fuel injectors? It was not starting so i replaced the asd relay and the crankshaft position sensor an still wouldnt start so i checked the inject...