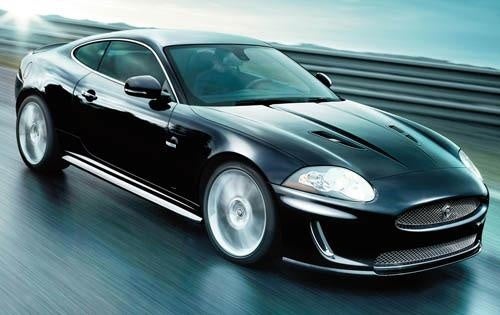 The 2011 Jaguar XK-Series supercar hasn't changed much since it was first introduced in 2007 (not that buyers who can afford a pricetag starting at $83,000 seem to mind). While it doesn't much look like Jaguars of old, the sleek two-door coupe seems to set a lot of tongues to wagging.

Base Jaguar XK's are available as either 2+2 coupes or convertibles, although both are powered by a 5.0-liter V8 engine that provides 385 horsepower and 380 pound-feet of torque. That's enough power to outclass much-heavier BMW and Mercedes models that come in two-door variants. Fuel economy is about the same as a midsize SUV for the base XK, with 16/24 city/highway mpg for the hardtop and 16/22 for the soft-top convertible.

The rear-wheel-drive Jaguar XK comes with a standard six-speed automatic transmission across all trims, along with paddle shifters on the steering wheel for increased responsiveness. Drivers also have a say in the handling of the car, thanks to Jaguar's Drive Control system, which has three presets that affect the suspension. It also reduces the shift timing for the transmission for more spirited driving.

Standard options include 19-inch alloy wheels, parking sensors, heated and cooled front seats, and a dual-zone climate control system. There is a backseat to earn the 2011 Jaguar XK its "2+2" moniker, but it's best used for storing a few shopping bags or nothing at all. The driver and front seat passenger, meanwhile, can take advantage of the touchscreen display in the center for navigation as well as an in-dash 6-CD changer with MP3 adapter.

Since it's a rear-wheel-drive car, Jaguar engineers have included traction control and electronic stability systems to limit the powerful V8's tendency to cause oversteer when the car enters corners. Convertibles also include pop-up roll bars behind the seats in the case the car ends up upside down.

If that doesn't whet a buyer's appetite for the Jaguar XK, perhaps the R edition will provide more appeal. The XKR, available as a coupe or convertible, gains a supercharged version of the base trim's V8 that pushes 510 horsepower, good enough for mid-4-second 0-60 mph times, according to reviewers. Combine that with a stiff body, even for the convertible version, and the XKR offers a large amount of power in a sleek package.

Just keep in mind that, like the XK-Series' fuel economy numbers, both the XK and the higher-powered XKR are almost as large as an SUV. The well-engineered suspension and the previously mentioned parking sensors help eliminate some of that feeling of heft, however.

If owners are looking for a little more exclusivity, the 2011 Jaguar XKR175 is a special edition that increases the car's top speed to 175 miles per hour. It has more aggressive front and rear spoilers, as well as 20-inch spoked wheels with red-painted brake calipers underneath. Only 175 of these will be sold in the United States, so each car is numbered on the door sill.

The Jaguar XK-Series offers a sleek touring coupe that is more modern than most of Jaguar's other designs, in spite of now being several years old. Outside of the miniscule rear seats and some cheap-looking interior trim pieces, it fits the wish list of someone looking for a luxury coupe that can be had with or without a soft top.

Have you driven a 2011 Jaguar XK-Series?
Rank This Car

Should Oil Be Changed If It's Been A Year Since Changed

Where is the DVD player on a 2011 XK convertible? The owner's handbook shows that there is a panel in the trunk on the left side but there is no panel there. There are 2 plastic grills that pull out t...