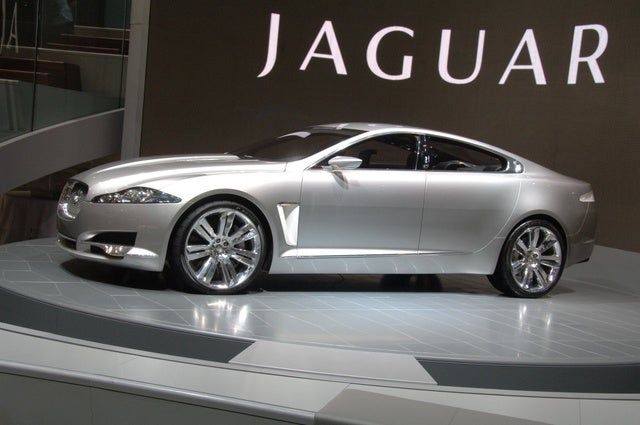 It's uniquely luxurious without being gaudy. It delivers brawny power and tight handling without sacrificing pristine comfort. And the brand new 2011 Jaguar XJ-Series is loaded with the latest technology, designed with a modern feel, and the most forward-looking Jaguar yet without losing touch with its classic British heritage.

Viewed from the front, the 2011 XJ-Series is clearly a Jaguar, which makes sense since the four-door luxury sedan is the company’s flagship vehicle. But move to the side and rear and you’ll notice the updates that depart from the Jaguar norm – the high-and-tight beltline, the sleekly narrow windows, the high, short trunk that has an air of French opulence, the flowing hood lines leading to the more-familiar cab-rearward design that leaves the XJ-Series looking like a living, breathing great cat sitting on its haunches with deadly calm.

The new XJ-Series is available in six trim levels with three engines and two wheelbase lengths. The Base XJ-Series comes with a direct-injection 5.0-liter V8 that produces 385 horsepower and goes from 0-60 in 5.4 seconds. The XJ-Series Supercharged gets 470 horsepower out of the V8 with the use of forced air and gets to 60 in 4.9 seconds. And the XJ-Series Supersport, available by special order only, cranks the horsepower up to 510 and drops the 0-60 time to 4.7 seconds.

All three engines are paired with a six-speed automatic transmission with overdrive and offer steering-wheel-mounted paddle shifters. And all three trim levels are available with the short wheelbase or the long wheelbase, which adds 5.3 inches to the car’s length. The short Base XJ-Series trim gets 19 combined mpg, and the long Base XJ-Series gets 18 combined mpg. The Supercharged and Supersport get 17 combined mpg regardless of length. Compared to other luxury sedans, those are very efficient numbers.

The exterior styling may not appeal to some, but it’s hard to imagine anyone not enjoying a ride in the XJ-Series. The transmission smoothly directs the car’s ample power to the rear wheels, allowing for rapid yet comfortable acceleration. The speed-sensitive variable-ratio power rack and pinion steering is ultra quick and gives the driver detailed maneuvering control.

A simple knob turn can shift the suspension of your XJ-Series into three driving modes – Standard, Dynamic, and Winter. The Dynamic setting is firm and allows for automated manual paddle shifting and spirited driving. The softer Standard setting handles rough road surfaces with a typically British calm and grace. Even if you’re not adjusting the ride, the XJ-Series is doing it for you with its self-leveling rear air suspension.

The XJ-Series' cabin also represents new territory for Jaguar. It is much more spacious than previous offerings, yet the lowered dash imbues that extra space with an intimate feel. The cabin bristles with technology and advances, a departure from the more traditional Jaguar cabins of the past. There is an 8-inch touch screen with audio, climate, Bluetooth, and navigation controls. The gauges are digital graphics displayed on a 12.3-inch thin-film-transistor screen, but they look like analog dials. When the “needle” on one of the gauges passes below a number, it glows brighter with what Jaguar calls a “torch effect.” And the gauges all turn red when the car is in Dynamic mode.

The three longer-wheelbase trims are designed with chauffered driving in mind, as they all add rear business trays (like those in an airplane), power-adjustable rear window sunblind, manual rear side sunblinds, and illuminated rear vanity mirrors. The XJ-Series L (the longer version of the Base trim) also adds heated and cooled soft-grain leather rear seats, four-zone climate control, and the 20-way adjustable driver’s seat with memory.

Users ranked 2011 Jaguar XJ-Series against other cars which they drove/owned. Each ranking was based on 9 categories. Here is the summary of top rankings.

Have you driven a 2011 Jaguar XJ-Series?
Rank This Car

on both sides of the monitor and the window buttons there is a tackiness. Is there anything I can use to get this sticky tacky feeling away? I hear this is a common problem with the XJ from years ...

954 views with 7 answers (last answer about a year ago)

CarGurus Offered To Buy My Vehicle For A Specific Amount. Who Do I Contact?...

I was notified by CarGurus that they would purchase my vehicle immediately for just under $14k. I requested a sale price of $15k. Who do I contact re: this offer?

How Do I Adjust The Price Of My Listing?