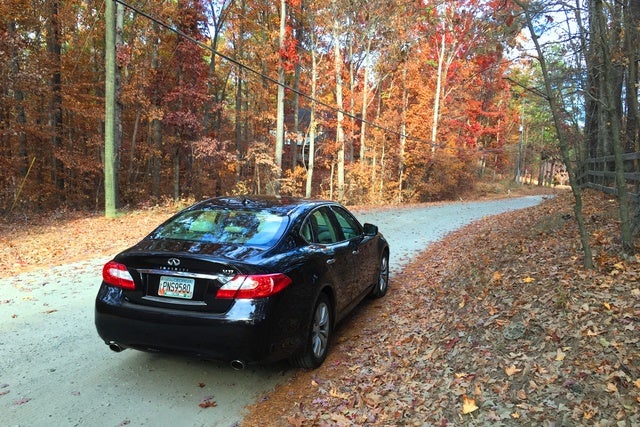 As promised, the brand-new 2011 Infiniti M37 has arrived, and it’s loaded for bear. This salacious roadster, based as it is on the recently introduced Essence concept, resembles a sedan in coupe clothing. An edgy front fascia complements elegantly curvaceous flanks that flow into an appealing and somewhat more European rear deck. The M37 is available in two trims, the rear-wheel-drive (RWD) Base M37, and the all-wheel-drive M37x AWD.

Dedicated to displacing the Audis, Mercedes, BMWs, and, yes, the Lexuses of the world, the 2011 M37 features a standard power moonroof, dual chrome-tipped exhausts, and 18-inch aluminum alloy wheels. A couple of inches longer and another couple wider than the soon-to-be-defunct M35, the M37 will offer snappier handling and a more aggressive stance. Additionally, available 20-inch wheels, a sport-tuned suspension and brakes, and sport steering are also offered to discerning drivers in the appropriately named Sport Package, which ought to mean more than a few trips to town via the long and winding road.

Meanwhile, a sumptuous five-passenger cabin is remade in the image of shogun-esque decadence, where leather, alloys, aluminum, and genuine wood frolic and interact, to ensconce passengers in refinement and luxury, complete with all the modern conveniences and comforts. Dual-zone climate control, keyless entry and ignition, carpeted floor mats, heated, power-adjustable front bucket seats, and steering-wheel-mounted audio and cruise controls are standard equipment, with an available power rear sunshade, suede-like headliner, upgraded leather and trim, and heated steering wheel waiting in the wings.

Finally, the heart and soul of the 2011 M37 is a potent 3.7-liter V6, hence the name. This state-of-the-art powerplant will put out an impressive 330 hp and 270 lb-ft of torque when managed by the standard seven-speed auto-manual transmission. Variable valve timing helps the V6 garner an estimated 18/26 mpg for the RWD Base and 17/24 for the M37x AWD.

Many owners of the 2010 Infiniti M35 complain of less-than-ideal interaction among the various technological components, and some grumble that maintenance and warranty programs aren’t compatible with most of the competition in this niche. The jury’s still out on whether the 2011 M37 addresses these problems, though already a few reviewers mention an over-abundance of gizmos, less-than-plush ride, and somewhat top-heavy stance. Price, however, as well as a fetching appearance and amped-up performance ought to give the M37 its share of attention.

Users ranked 2011 INFINITI M37 against other cars which they drove/owned. Each ranking was based on 9 categories. Here is the summary of top rankings.

How Do I Get The Key Warning Off

How do I get the key warning off my dashboard

I changed the battery in fob. Warning Key System light will not go off. I have disconnected car battery with no success in a reset. Infinity technician didn't have an answer. Help!!

I'm Having An Issue With My Hazard Lights Automatically Turning On And Off ...

Whats going on with my hazard lights. Its as if they are possessed. They turn on as I am driving, or even after I park it and power it off. This all started after the big snow we got in GA.

951 views with 6 answers (last answer about a year ago)

If one buyer was interested buying but never did and it says in progress, how do I stop it. Another buyer has test driven the car and wants it and ready to purchase now. I would rather sale to 1s...

What Are The Primary Differences Between The Infiniti M35 And M37? Thanks