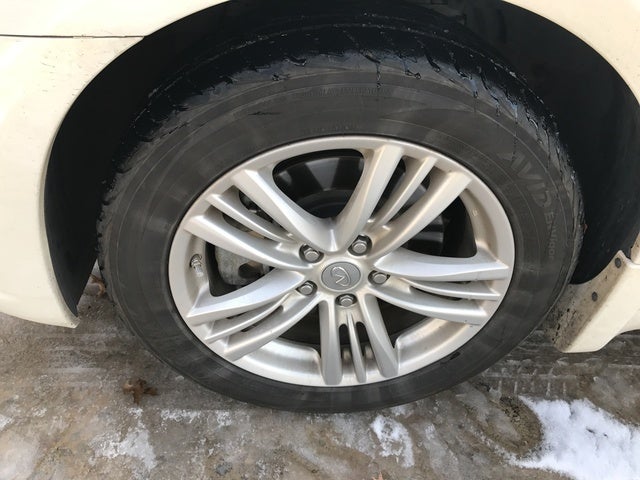 It’s not so much that Infiniti has lowered the bar as it's provided a little stepstool. With the introduction of the G25 sedan, Infiniti offers an easier entry into its G-Series line of sedans. In keeping with the numbers for liters designation, the G25 is powered by a 2.5-liter V6 engine, but is otherwise virtually identical to the more powerful G37. Available in Base and Journey trims, the four-door G25 sedan comes in rear-wheel- (RWD) and all-wheel-drive (AWD) configurations, all standard with a seven-speed automatic transmission.

Eager to position this as anything other than an economy Infiniti, even the Base G25 comes with power leather front seats, 17-inch alloy wheels, HID headlights, and automatic climate control. For those who want a bit more, the Journey trim will additionally offer heat to the front seats and mirrors, upgrade the automatic climate controls to a dual-zone system, and make the headlights automatic units. Any trim that adds AWD to the package will also tack an “X” onto the G25, but all are powered by the same 2.5-liter engine.

It’s from the same VQ group of Nissan engines that spawned the G37’s 328-hp, 3.7-liter V6. With more than a liter’s worth of drop in displacement, the 2.5 is packing only 218 horses and 187 lb-ft of torque. It’s a substantial drop in performance from the G37, but it’s not so slow as to provoke bouts of insanity, unless you hop directly from vehicle to vehicle. Sadly, official mileage estimates have yet to be released, but Nissan is expecting only a 1-mpg increase over the G37's, which itself clocks in at only 19/27 mpg, according to the EPA. I’d like to see a bigger jump considering the 110-hp drop for the G25, especially when considering the required premium gasoline, but 20/28 isn’t terrible either.

At an MSRP of $31,825, the G25 undercuts its big brother the G37 by almost $5,000, and most of its competitors by at least a couple of thousand dollars. However, the G25’s engine lacks the storied history of the 3.0-liter BMW engine in the 328i and the benchmark suspension and handling of the same. It doesn’t have the same implied luxury of the Cadillac CTS or the expectant quality of a Mercedes C-Class. No, the G25 has a long way to go, but so far it seems to be heading in the right direction.