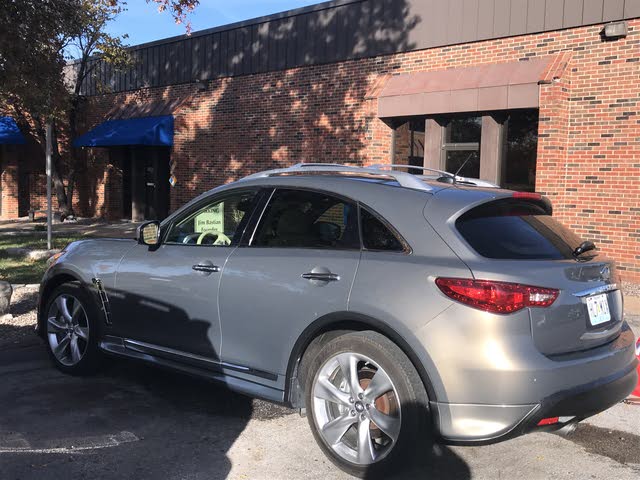 Daring styling and seriously brisk performance make the 2011 Infiniti FX50 a unique alternative for well-heeled drivers who want to set themselves apart from the crowd. Though the second-generation FX hasn't found widespread marketplace acceptance, the 2011 FX50 delivers driving dynamics that are near the top of its class. Add in a luxurious, technology-packed interior, and the 2011 FX50 becomes a serious contender in an admittedly thin market that also sees the BMW X6, Mercedes-Benz ML63 AMG and Porsche Cayenne competing for a slice of the pie.

The first thing most people will notice about the 2011 FX50 is its unconventional front-end styling. While the 2011 FX50's side profile retains the familiar contours of the successful first-generation model, the exaggerated and bulbous nose is a bit of a turn-off. But Infiniti should be commended for taking a risk and making a vehicle that looks different, especially given that the FX50's bloated hood makes room for a rip-snorting V8 engine.

Offering a significant power increase over the six-cylinder FX trim, the 2011 FX50 features an all-aluminum 5.0-liter V8 that makes 390 hp and 369 lb-ft of torque. Hammer the throttle from a standstill and the FX50 will sprint to 60 mph in well under 6 seconds, emitting a muted snarl from the engine room. While the six-cylinder FX can feel coarse and taxed at times, the FX50's smooth, torquey motor and standard AWD provide rapid, seamless acceleration upon demand.

Infiniti's modern seven-speed automatic transmission handles shifting duties in the 2011 FX50. With a wide ratio spread and intelligent logic control, the gearbox delivers quick, seamless shifts. Though it would be too much to wish for a stick, the FX50's manual shift mode and downshift rev-matching make for a somewhat involving experience.

Every 2011 FX50 features so-called Intelligent all-wheel-drive that constantly monitors road conditions and adjusts the power distribution accordingly. The excellent grip afforded by this system is a boon in enthusiastic driving, though the performance-biased summer tires mean that the FX50's winter traction isn't as abundant as one might expect.

While on the subject of handling, it's important to note that the 2011 FX50 corners with far more agility than most traditional SUVs. Its (relatively) low center of gravity and wide stance, combined with the grippy tires, contribute to the FX50's surefooted feel on dry roads. Body motions are well controlled, courtesy of a double wishbone front suspension and firm shocks. The trade-off for this frisky handling is a harsh highway ride, and the FX50 deals with expansion joints and potholes rather poorly. Braking performance is excellent, no surprise given the 2011 FX50's large, multi-piston disc brakes.

Though the 2011 FX50's exterior styling might be called polarizing, the sumptuous interior is capable of pleasing even the most demanding buyer. With its (mostly) intelligent design and top-notch materials, the FX50's cabin is a pleasant place to whittle away the miles. Nearly every feature in Infiniti's arsenal is standard in the 2011 FX50, including a rather baroque quilted leather treatment for the heated power seats. Also included are GPS navigation, a rear-view camera and a Bose stereo that offers a hard drive for music storage. Elbow room is good, especially given the FX50's wide track, but rear seat head room is compromised by the swooping roof line.

Standard safety features abound in the 2011 FX50. Front, side and curtain airbags are complemented by active head restraints that Infiniti says help reduce whiplash. High technology safety options include a forward collision warning system and an intelligent braking assist feature that can slow the car without driver intervention.