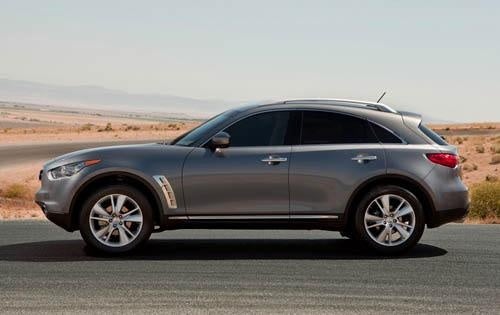 Though a tad on the small side, the 2011 Infiniti EX35 compact luxury crossover wagon packs a potent driving wallop. Able to seat five passengers in two rows, this compact crossover is touted as a family wagon in some circles, while other circles regard its cramped second row and limited cargo area (47.4 cubic feet with the rear seats folded) as a bit size-challenged for the average family. Nevertheless, this mini-ute is a well-wrought machine with plenty of styling, features, performance, and especially handling. Indeed, many reviews compare the EX35’s rear-wheel-drive (RWD) handling characteristics to those of a sports car rather than a CUV. With a new seven-speed auto-manual transmission and 18-inch wheels replacing the five-speed transmission and 17-inch wheels of yore, driving excitement is amped up even more, according to virtually all reviews. Trims, meantime, remain the Base and top-shelf Journey, both of which are delivered in either the standard RWD configuration or with available all-wheel drive (AWD). The major competition for Infiniti’s luxuriously appointed mini crossover continues to be the Audi Q5, Mercedes-Benz GLK350, and Volvo XC60. Each of the latter are somewhat more family oriented, but none offers the downright exhilarating driving kick of the EX35.

Though the standard 297-hp, 3.5-liter V6 soldiers on in the 2011 EX35, a new seven-speed auto-manual transmission helps provide 253 lb-ft of torque and gives drivers a few more gears to play with on the commute to work or the trip to the mall. Fuel efficiency, remains pegged at an estimated 17/24 mpg for both RWD and AWD trims, but this mini-crossover simply isn’t designed to haul any sort of trailer, so towing figures are unavailable. The available AWD system, however, remains unique in that it features a “snow mode” in which power is automatically transferred from 100% RWD in optimum conditions to 50/50 front-drive/rear-drive (50%-FWD and 50%-RWD) when roads become slick.

Options are limited for the EX35 Base, consisting of several cargo and storage upgrades and a vehicle alarm impact sensor. The Journey, however, is another story options-wise. This top-shelf trim offers available DVD navigation, 19-inch alloy wheels, universal remote garage door opener, reverse-tilting outside mirrors, and upgraded, 11-speaker Bose audio components, as well as power-folding second-row seats and driver memory features for the driver’s seat and exterior mirrors. All the above are available only in various packages, with aluminum roof rails offered as the sole standalone option.

As is traditional, safety is paramount in the EX35. Four-wheel ABS, traction and stability control, front side-mounted airbags, front and rear head airbags, and active front headrests are all standard for both trims, as are front fog/driving lights and a remote anti-theft alarm. The Journey additionally offers available xenon HID headlights, a blind-zone alert system, adaptive cruise control, intelligent braking, and the unique Around View Monitoring system that provides a bird’s-eye perspective of the area around the vehicle via an integrated console monitor.

A somewhat tight fit for adults in the rear seats combined with a distinctly un-crossover-like dearth of cargo space seem to be the most disappointing aspects of the EX35 as far as owners of 2010 trims are concerned. As well, owners are disappointed at the skyrocketing price of this cute ute with just about any options package added, while issues with rearward visibility and some uneasiness with fuel economy also concern more than a few. On the positive side, however, few owners want to give up the ride, handling, and V6 performance this sporty crossover offers. Finally, good looks, both inside and out, plus Infiniti reliability and an abundance of standard creature comforts keeps owners more than merely satisfied with their choice of the EX35.

What Does Salvage Issues Mean

I noticed on a vehicle 2011 Infiniti that a yellow triangle said > "Salvage Issues". What does that mean - thanks!