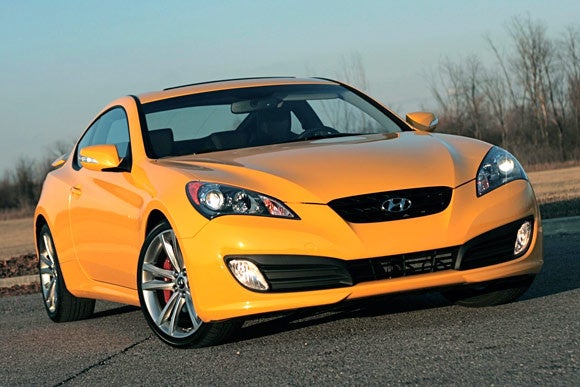 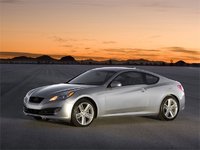 The 2011 Hyundai Genesis Coupe is sprightly with either engine and nearly begs to be thrown into the nearest corner without leaving your pockets feeling empty.

A bit more refinement in the suspensions and 6-speed transmission would be a wonderful complement to the redesigned interior the 2011 Hyundai Genesis Coupe got.

Hyundai is heading in the right direction, and the improvements to the Genesis Coupe for 2011 show it's not just looking for a one-shot entry into the sport coupe market. With continual improvement, especially to the 4-cylinder’s turbo and the 6-speed manual transmission, the Genesis Coupe could be a real contender. With some serious reengineering to the suspension setups, it will surely be.

A few short years into its lifespan, the Hyundai Genesis Coupe is getting some slight revisions for 2011. The self-proclaimed BMW killer has offered some unique trim packages in its history and this year is no exception, with 2.0T Track and base 3.8 trims falling away in favor of a new, stripped, 3.8 R-Spec trim.

Little else has changed for the front-engine/rear-wheel-drive coupe, and that’s a good thing. With V6 and turbocharged 4-cylinder powerplants, the Genesis Coupe still offers a bit of flexibility within a narrow class, and does so with performance that would suggest a much higher price point.

With several different available engine and transmission combinations, finding the perfect setup takes some time. There have been criticisms about nearly all the options, from excessive turbo-lag in the 4-cylinder and a sloppy, imprecise feel from the 6-speed manual to a desire for more power from the V6. All are valid concerns, although some more exaggerated than others. Perhaps it’s unfair to deal the Genesis extra slack due to its underdog status, but a lot can be said for both engines. Yes, there is turbo-lag to be dealt with in the 4-cylinder. Yes, the 6-speed manual is every bit as sloppy as reported. If these are major issues, go with the 3.8-liter V6 with the proven ZF 6-speed automatic. The standard paddle shifters bring out the fun, and a more aggressive rear axle ratio of 3.73 vs. 3.54 with the manual should also help ease the pain a bit.

For all its aims and goals, the Genesis Coupe is not a BMW killer. Hyundai may claim that was the bar for which they were aiming, but they’ve fallen short. It’s not to say the Genesis Coupe isn’t capable. It is. But there is an abrupt and definitive lack of refinement that will never allow the comparison. The fact that it simply can’t keep up even on a strictly performance level only adds to the disappointment.

This is not to shoot the Genesis Coupe down completely, as the car can turn. As suspensions get stiffer and tires get larger, culminating in the 3.8 R-Spec trim, the vehicle gets stickier and stickier. Unfortunately as the good gets better, the worst gets worse. Even in its base setup, the Genesis Coupe can handle most corners with eager willingness, but bumps will reverberate harshly throughout the chassis and steering column. As things get tighter, they only get worse. The 3.8 R-Spec trim is most capable through the turns, but is almost undriveable on the street.

Dials and gauges are well-placed and easy to read. The layout is simplistically graceful and conducive to aggressive driving. So why hasn’t the Genesis Coupe’s cabin received more praise? Perhaps it’s simply because of the comparisons with its bigger brother the sedan, whose similar cabin is simply a more elegant and upscale affair. Hyundai downgraded the interior for the Coupe originally, taking out trim and leather from most setups, and left things looking rather stripped. Side by side with the sedan, the Coupe looked a bit generic. Taken on its own… well, it still looked a bit generic. Substance over style, it seems. For 2011 the interior has been redone with new trim and faux-metal accents as well as an increase in fabric and soft-touch materials over the hard plastics that dominated the cabin previously. It’s a welcome and substantial upgrade to the overall feel of the Coupe.

Seats provide a good combination of comfort and control, with adequate side bolstering for as much turning as the Coupe will allow. Rear seats are predictably near-useless, but a wonderful and welcome surprise comes from the Coupe’s visibility, which surpasses similar models due to large rear and rear quarter windows. Engine noise never crosses over into annoying, but tire and road noise will permeate at nearly all speeds.

While all Genesis Coupes come with standard safety features like six standard airbags, four-wheel antilock discs, brake assist, stability and traction control, certain trims get a bit more. The 3.8 Grand Touring trim for instance, comes with a rear-obstacle detection system, while the 2.0T R-Spec gets upgraded brakes that carry over into the 3.8 R-Spec and Track trims.

While the National Highway Traffic Safety Administration (NHTSA) has yet to release test results for the Genesis Coupe under its new procedures, the Insurance Institute for Highway Safety (IIHS) has awarded the Genesis Coupe a Top Safety Pick award for 2011, with a Good rating in all categories - its highest level.

With the Genesis Coupe’s price and performance, there’s a strong following of loyal owners for which the little 2-door can do no wrong. For those used to a bit more refinement in their sports cars, the Coupe is lacking a bit. Too much jostle and jump in the sport suspensions simply leads to fatigue over distance. Many aren’t familiar with turbo-lag, a symptom too easily overcome with a bit of tech, and the sloppiness of the 6-speed is simply disappointing. However, there are few complaints about the V6/ZF setup, and for those who are looking for straight performance, comfort is rarely a dissuading issue.

What's your take on the 2011 Hyundai Genesis Coupe?

vgreene I OWN IT AND I LOVE IT--SPEED-PERFORMANCE--SAFETY AND STYLE.

vgreene The 2011 genesis coupe is a performing sports car and please don't knock it until you've driven one--very satisfied with mine.

Users ranked 2011 Hyundai Genesis Coupe against other cars which they drove/owned. Each ranking was based on 9 categories. Here is the summary of top rankings.

Have you driven a 2011 Hyundai Genesis Coupe?
Rank This Car

I am basically have a mint condition genesis coupe 3.86 speed with under 50,000 miles say I was to store it for many years would the value go up?

Switching To Neutral While Driving Damaging?

I own a 2011 Hyundai Genesis Coupe 2.0T Manual. I have seen that by putting the car in neutral while its rolling the mpg indicator goes from 16 mpg city to 21 mpg for city driving. I was wondering if ...

301 views with 4 answers (last answer about a year ago)

My Buddy Has A Hyundai Genesis Coupe Rs3800 My Question Is Why Does It Soun...

My 2011 Hyundai Genesis Coupe Key Gob Not Working Correctly. It Will Unlock...

My key fib opens the trunk, but nit the doors. The doors make a noise when I push the key fob button and the lights flash. Doors remain locked. I have replaced the battery.