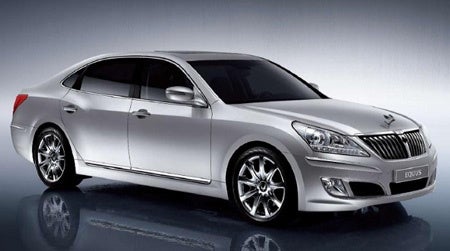 The 2011 Hyundai Equus' lack of brand credibility in the ultra-luxury market might lead to derisive comments from your friends at the club or the valets at that posh new nightspot.

The excellent 2011 Hyundai Equus sedan represents, like the company's Genesis before it, a new and bold direction from an automaker whose ambition (and talents) have grown appreciably in recent years. In terms of luxury and sophistication, the 2011 Equus can easily dominate its price class and even rival cars costing far more. Given a bit more seasoning and some brand awareness, the top-line Hyundai might one day compete on an equal playing field with the big boys from Mercedes and Lexus.

Built basically as a larger, fancier version of the award-wining Genesis, the 2011 Equus (from the Latin for horse) offers a level of luxury and refinement that’s nearly as good as the established players from Japan and Germany. The Equus rides on a modified version of the Genesis' modern, rear-wheel-drive architecture and also shares its Tau V8 engine with the smaller sedan. Despite borrowing a template from the Genesis, the 2011 Equus has a longer wheelbase and is taller and longer overall, casting roughly the same shadow as a short-wheelbase BMW 7 Series or Lexus LS 460.

While the 2011 Equus' dimensions are up to snuff, the car's rather derivative, contrived styling doesn't elicit the same response as the flowing designs from the established players in this market. Baroque might be a good word to describe some of the design details that Hyundai stylists have liberally sprinkled on the Equus. From its gaping, glittering chrome grille to its oddly shaped rear haunches, the 2011 Equus is a mishmash of elements from competing designs with a few 1970s American themes thrown in for good measure. Insufficient and confusing badging doesn't help matters outside; the rare passerby who is attracted to the Equus will have a hard time figuring out what it is.

Overall the 2011 Hyundai Equus does for luxury sedans what the Genesis did for sports sedans; it makes an incredibly capable automobile available to a much larger segment of the population. With its powerful but unhurried drivetrain and soft-riding suspension, the ambitious Equus succeeds on nearly every level of luxury. With a better look and some more panache, it could be a real comer.

The first U.S.-bound Equuses (Equuai?) will get Hyundai's excellent 4.6-liter, 32-valve V8 engine. The V8, which also sees duty under the Genesis’ hood, churns out 385 hp and 333 lb-ft of torque. Power is delivered with velvety smoothness, wafting the Equus effortlessly off the line and up into the triple digits. There is nary a trace of coarse behavior from the advanced, all-aluminum V8.

A 6-speed automatic transmission (sourced from specialist ZF of Germany) handles shifting duties admirably, providing seamless gear changes at just the right moment. Soon after launch the Equus will be available with a punched-out 5.0-liter version of the Tau motor, likely delivering more than 425 hp. A new 8-speed automatic gearbox, developed entirely in-house, will complement the new V8 when it arrives sometime in 2012.

With the smaller, sportier Genesis taking up the mantle of frisky handling, the Equus is free to concentrate on providing a serene and implacable ride. The front and rear independent multi-link suspension is dampened by height-adjusting electronic air springs that are tuned for cloud-like comfort. Though not at all sporty, the Equus' handling should prove plenty capable for its intended audience. Braking is by large four-wheel vented discs front and rear, contained within the Equus's Bentley-esque 19-inch alloy wheels.

Pure luxury is the Equus' mission, and nowhere is that more evident than inside the opulent cabin. Nearly every surface is covered in high-quality leather, wood or thick carpeting. The feature quotient, in the base-level Equus Signature or the loaded Equus Ultimate, is impressive and includes items not even found in big Benzes and Bimmers. The Equus Signature comes standard with heated and cooled front seats with driver massage, GPS navigation with back-up camera, a stunning Lexicon stereo with 17 speakers, power-operated rear seats and an Alcantara ultra-suede headliner.

The range-topping Equus Ultimate, by far the most expensive Korean car ever sold in America, coddles with an executive-class rear seat that reclines, a la Maybach, on the passenger side. This arrangement, while involving a rather un-Maybach-like folding of the front passenger seat, imbues the rear cabin with uncommon comfort and spaciousness. Rear seat passengers are also treated to a DVD entertainment system, power headrests, a refrigerator and an imposing wood console that controls these and other features. These ultra-luxury features make the Equus an ideal choice for chauffeured corporate or livery fleets, especially given the popular Lincoln Town Car's impending retirement.

Safety features have not been overlooked in the 2011 Equus. Hyundai has included front, side, and curtain airbags, plus an innovative knee airbag designed to protect the front occupants' legs in a collision. Standard stability and traction control, active headrests, a lane departure warning system and smart cruise control are all welcome additions. While the 2011 Equus hasn't been tested for crash-worthiness by the government, the 2010 Genesis' rare quintuple five-star rating suggests that the added safety gear will only improve a stellar performance.

Since the 2011 Hyundai Equus is a newly introduced model, there is little feedback from owners. Though most are likely to praise the Equus' peerless combination of luxury and comfort, some buyers may feel that the Hyundai brand lacks cachet. While this is Hyundai’s first foray into the luxury arena, initial reports on the dealership and delivery experience are positive, and the iPad-based owner’s manual is lauded as a nice touch.

Have you driven a 2011 Hyundai Equus?
Rank This Car

36 views with 4 answers (last answer about a month ago)

Can the remote be analyzed as to tell when it was used to open or lock the vehicle.

I don't have the original instructions since the reader device was stolen.