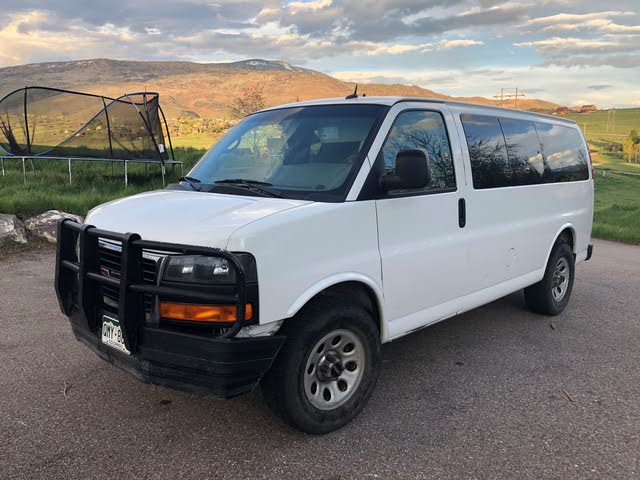 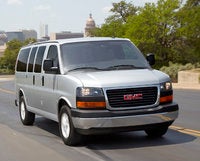 The aging 2011 GMC Savana still packs a lot of passenger and cargo room into a relatively inexpensive frame. Two admittedly inefficient but powerful V8 engines will get up to 15 passengers, 3,591 pounds of cargo, or 7,800 pounds of trailer where they have to be, when they have to be there. This hefty full-size passenger wagon remains unchanged for 2011, with two trim levels, the LS and LT, available in the half-ton G1500 series, three-quarter-ton G2500 series, and the one-ton G3500 series. The G1500 trim is delivered in either the standard rear-wheel-drive (RWD) configuration or with available all-wheel-drive (AWD). The G3500 series, meantime, is the only one that’s available in the stretched-out 12/15-passenger EXT version. Though not as technologically savvy as Ford’s E-Series wagons, nor as nimble and efficient as the Dodge/Mercedes-Benz Sprinter, the Savana nevertheless finds its niche with those who might be on a tighter budget.

Powering the 2011 Savana G1500 series passenger vans is a standard 5.3-liter Flex Fuel (E85-capable) V8 that bangs out 310 hp and 334 lb-ft of torque when managed by the standard four-speed automatic transmission. Towing capacity is 6,200 pounds, but the lack of variable valve timing means only 15/20 mpg, at best. That’s better, however than the 6.0-liter Flex Fuel V8 powering the G2500 and G3500 series’ wagons. Even though that same four-speed automatic allows 323 hp and 373 lb-ft of torque, mileage, even with variable valve timing, is a dismal 14/17. Towing capacity, though, does jump to 7,800 pounds with this pumped-up V8.

Meanwhile, 2011 should find the Savana LT trims boasting cloth upholstery, power windows and door locks, tilt-wheel steering, cruise control, rear-seat air conditioning, and remote keyless entry. Virtually all the options offered with the LS are available for the LT, as well, with the additional choice of power front seats and remote engine start.

Sheer size and bulk complement the 2011 Savana’s traditional standard safety features. Such items as four-wheel disc ABS, traction and stability control, three-row head airbags, daytime running lights, and the PASS-Key III anti-theft system all contribute to occupant safety. One thing to keep in mind is that these types of vehicles are inherently top-heavy; taking corners at excessive speeds, even with the G1500 AWD, is, therefore, not a good idea.

Little has been noted regarding owner experiences with the 2010 Savana, either good or bad. Suffice to say that loads of room, tons of capability, and lots of van for the money mean that this worthy workhorse ought to be around for awhile.

Have you driven a 2011 GMC Savana?
Rank This Car