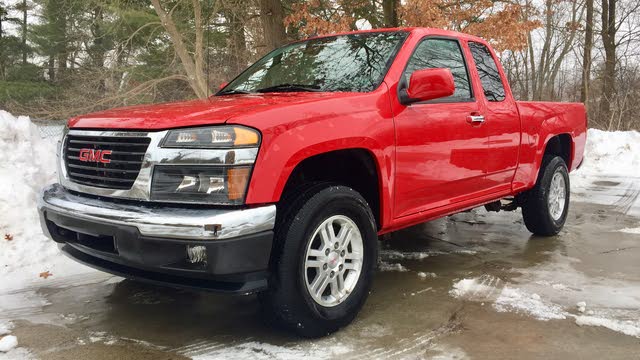 As small pickups go, the 2011 GMC Canyon does its job without a lot of flair or much in the way of gadgetry. This little hustler doesn’t get much praise, due mainly to the likes of the Nissan Frontier and Toyota’s iconic Tacoma, both towers of refinement and resale value in comparison. The Canyon, however, has a few attributes that the Japanese automakers can’t match, such as an available V8 engine and standard OnStar Directions and Connections navigation and communications technology, not to mention the fact that it’s made In America. Essentially the 2011 Canyon remains the same truck as last year, though Bluetooth technology, an additional three months of complementary OnStar service and redesigned front headrests are new this year.

In any case, Jimmy’s little pickup comes in three trim levels, the base Work Truck, the midlevel SLE1, and the flagship SLT. The SLE1 is offered in Regular, Extended, and Crew cab configurations, the Work Truck comes in both Regular and Extended cab versions, and the SLT is offered in only Extended and Crew cab variations. Regular-cab and Extended-cab bed lengths are the traditional 6 feet, with the Crew cab sporting a 5-foot bed. Payloads vary from 1,230 pounds to 1,484 pounds, depending on cab style. The Canyon’s Extended and Crew cab variants are touted by GM as six-passenger pickups, but virtually all reviewers agree that four to five passengers is about the best either can handle with even a modicum of comfort. Though rear-wheel drive (RWD) is standard, all three trims are available with part-time, shift-on-the-fly four-wheel drive (4WD). The SLT trim level, meantime, comes with a standard heavy-duty suspension, while both the SLE1 and SLT trims are available with either the highly touted Z71 Off-Road Suspension or the nifty ZQ8 Sport Suspension.

A selection of three engines, an inline four-cylinder (I4), inline five-cylinder (I5), and a V8, is available to various Canyon trims, as is the choice of either a 5-speed manual transmission or a 4-speed automatic. The Work Truck and SLE1 Regular and Extended cab trims each sport a standard 2.9-liter I4 and 4-speed automatic transmission. The four-banger puts out 185 hp and 190 lb-ft of torque, can tow up to 3,400 pounds with proper equipment, and with variable valve timing (VVT) gets an estimated 18/25 mpg in RWD trims and 17/23 in 4WD versions. Additionally, a 5-speed manual transmission is available with this smallest of the Canyon’s engine offerings. Standard in the SLT trim, meanwhile, is a 3.7-liter I5 VVT powerplant that’s matched with the standard 5-speed stick shift. The I5 throws down 242 hp and 242 lb-ft of torque, can handle up to 5,500 pounds of towing, and is estimated to get 17/23 in RWD and 4WD trims. The I5 is also available to the Work Truck and SLE1, again with the 4-speed automatic standard and the 5-speed manual transmission as an option.

Finally, a 300-hp 5.3-liter VVT V8 powerplant is available to the SLT as well as the SLE1 Extended and Crew cab configurations. This potent V8 mates only with the 4-speed automatic transmission for some 320 lb-ft of torque, with towing boosted to 6,000 pounds with the proper equipment and RWD configurations getting an EPA-estimated 14/20 and 4WD versions getting 14/19. Meanwhile, those Canyons that are equipped with part-time 4WD sport locking rear differentials, auto-locking hubs and electronic hi-lo gear selection as part of the package.

Creature comforts are, if not bountiful, at least better than Spartan in the 2011 Canyon trims, a fact not lost on most reviewers. The base Work Truck, for instance, boasts standard 16-inch steel wheels, premium cloth upholstery, front and, in Extended cab versions, rear bench seats, tilt-wheel steering, cruise control and air conditioning. The popular OnStar Directions and Connections navigation and communications system is also standard, as is an AM/FM stereo, with two speakers in Regular cab trims and four speakers in Extended cab versions. Finally, as of 2011, Bluetooth hands-free phone technology is now standard in the Work Truck trim level, as well.

To all of the above, the SLE1 trim level adds 16-inch alloy wheels, a leather-wrapped steering wheel, simulated alloy dash trim, and, in Extended and Crew cab variations, remote keyless entry as well as power windows and door locks. All 4WD versions of the SLE1 sport also boast standard skid plates. Entertainment-wise, the SLE1 comes equipped with a standard single-CD player and XM satellite radio, with four speakers in Regular cabs and six speakers in Extended and Crew cab variations. As befits its top-shelf status, meantime, the SLT throws standard 16-inch chrome-clad wheels, heated, power-adjustable front seats, leather upholstery, power accessories including power-adjustable outside mirrors, an auto-dimming rear-view mirror, and a sliding rear window into the mix of standard features.

Options for the Work Truck and SLE1 trims, of course, include a number of standard features found in the SLT level. Some additional options for select trim levels also include upgraded 17- and 18-inch wheels, step running boards, a trailer towing package that includes a hitch and seven-pin wiring harness and front bucket seats.

Standard safety features in the 2011 Canyon pickup include four-wheel antilock brakes (ABS), traction and stability control, front, and in the case of Extended and Crew cab configurations, rear side-mounted head airbags and a post-collision safety system. Additionally, all trims boast OnStar emergency notification technology for airbag deployment, stolen vehicle tracking, and roadside assistance, while the SLT sports standard front fog/driving lights that are optional for the Work Truck and SLE1.

The absence of a lot of extraneous convenience features seems to be both a boon and a bane to owners of the 2010 Canyon trims. Some claim enough features to be comfortable without feeling overwhelmed, while others think a few more standard creature comforts would be a good thing. Virtually all owners, however, feel that the Canyon’s cabin could use less low-budget trim materials and a bit more seat comfort. As well, many owners complain that on-road handling is a weakness with Z71-equipped trims, that the I4 engine can be distractingly noisy on the highway, and that the V8 is a notorious gas guzzler. There are, however, a number of details that please owners, chief among them the Canyon’s looks, V8 option (appetite for gas notwithstanding), tolerable ride comfort (without the ZQ8 suspension), and its better-than-adequate off-road capabilities. Finally, a number of owners laud the Canyon’s nearly sedan-like maneuverability in tight places, while nearly all appreciate its reasonable base price.

Have you driven a 2011 GMC Canyon?
Rank This Car

how do I place an ad on Carguru

What Should I Do To My Truck That Wont Break The Bank?

I recently picked it up, less than a month ago. Now I am trying to customize it to make it look really nice, its got chrome, and the truck is red. I've already have a new radio, tinting, mud flaps, ...

How Often Does 4 Wheel Drive Maintenance Need To Be Done If It Is Never Use...

every thing clean. what else to look for?