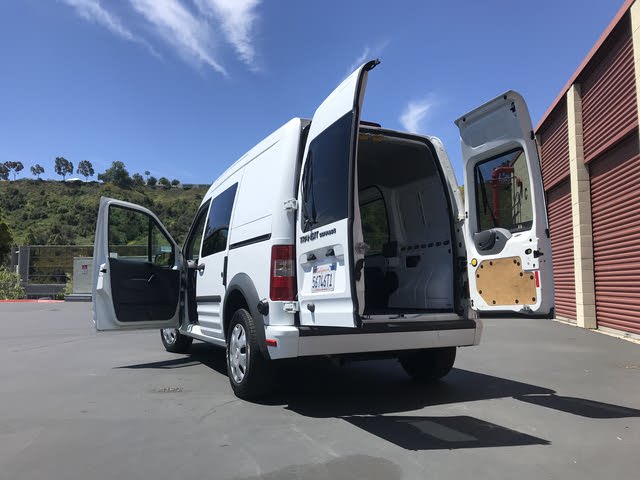 The 2011 Ford Transit Connect cargo van and passenger wagon have essentially downsized Dodge’s popular Sprinter concept. Each, however, shows its European origins in a look that’s gaining popularity on this side of the pond. Introduced for the 2010 model year and with some 135 cubic feet of cargo capacity in both the cargo van and passenger wagon version (the latter boasting its space with the rear seats folded), a miserly four-cylinder engine and surprisingly nimble handling both in the city and on the highway, the Transit Connect provides convenient, if not capacious, hauling ability, efficient, if not neck-snapping, acceleration, and comfortable, if not luxurious, accommodations. This mini can be delivered in a pair of cargo-van configurations, the base XL and higher-end XLT, as well as a pair of passenger wagon versions, the XLT and XLT Premium. As of now, only the pricey-but-ground-breaking Sprinter represents anything like Ford’s Transit Connect.

At present, only one drivetrain is available for the 2011 Transit Connect, a 2.0-liter inline four-cylinder (I4) with an accompanying four-speed automatic transmission. This pairing puts out 136 hp and 128 lb-ft of torque, while sipping fuel at a pump-skipping 21/26 mpg.

Standard creature comforts and appearance features are pretty much bare bones for the base 2011 Transit Connect XL cargo van, with 15-inch steel wheels, cloth front captain's chairs, air conditioning, telescoping tilt-wheel steering, and AM/FM stereo with two speakers being about everything. The XLT adds a bit more, including power windows, door locks, and heated mirrors, cruise control and a single-CD player. The XLT five-passenger wagon, of course, features a rear bench seat with split-folding seatbacks and rear windshield wiper, while the XLT Premium wagon throws a couple more speakers into the mix.

Virtually all owners of the two-passenger cargo version of the 2010 Transit Connect feel that another foot or so of length would make this a perfect cargo hauler. However, what that would do to this mini’s acclaimed nimble handing on crowded city streets, its preferred venue, is a serious consideration. Fuel efficiency nicely balances out an ultra-basic cabin, according to most owners, while opinion seems to be divided regarding the I4’s acceleration. A low-slung chassis is a concern to owners in wintry climes, but owners are taken with its European flair. One final owner complaint is that this semi-unique vehicle ought to be equipped with a diesel engine for even better mileage and acceleration.

What's your take on the 2011 Ford Transit Connect?

Casey I'd been wanting one for years and recently found one on CarGurus. It's a great little cargo van but it's important which style you buy. In my case I found that I needed the side and rear windows and a rear camera to make driving it easier. It has plenty of getup and go but does have a hard time climbing inclines. Not the best vehicle if you're driving in the mountains. On straight a-ways it cruises very nicely. You sometimes forget just how fast you're going it runs so smooth. It's fuel efficiency is pretty good, roughly 300 miles on a tank of gas. The large windows are a big plus if you're taking it traveling. You'll have a great view. I particularly like the 2011 model better compared to the newer versions, because of it's shape/style, double rear doors and more headroom.

Have you driven a 2011 Ford Transit Connect?
Rank This Car

How Canyou Not Suggest A Price On My Vehicle When I List It And Yet Call It...

Is It Very Likely That Replacing Solenoids A & B In The Transmission Of My ...