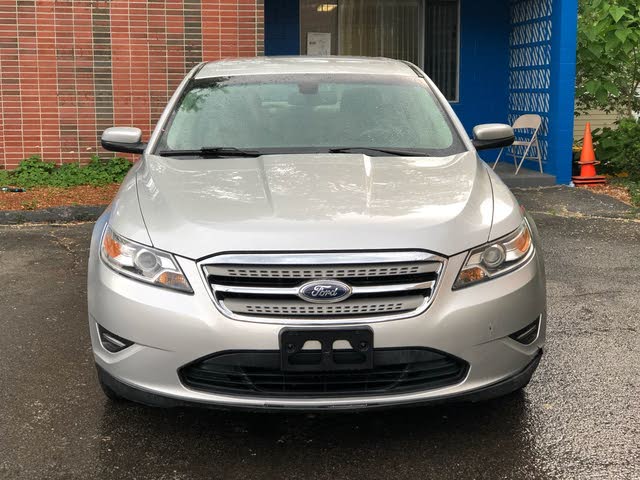 Some distracting blind spots, a confining rear seat, occasional hunt-and-peck transmission performance in non-SHO Taurus trims, and the SHO’s harsh ride, not to mention its hefty price, can be disconcerting for those considering the 2011 Taurus.

For the money, the 2011 Taurus is as good a full-size family sedan as there is out there. No automobile is perfect, but the object is value, reliability, safety, and, yes, at least a modicum of driving excitement, all of which the Taurus provides.

Retooled and re-introduced for the 2010 model year, the Ford Taurus glides into 2011 relatively unchanged. This five-passenger full-size sedan replaces the semi-popular Ford 500 and continues a tradition of technological innovation at an affordable price. Though not luxurious in the same sense as a Cadillac, Lincoln, Bentley, or Rolls, that term is occasionally bandied about when describing the 2011 Taurus, due in large part to its wealth of standard and available technologically savvy creature comforts. Generally regarded as comfortable, well-mannered, and good-looking, this family-oriented automobile represents its game-changing progenitors in a way that does Ford proud.

Available in four trims, the base SE, midlevel SEL, top-shelf Limited, and muscular SHO, the 2011 Taurus offers something for everyone. Both the SEL and Limited can be delivered with front-wheel drive (FWD) or all-wheel drive (AWD), while the SE is FWD-only and the SHO comes only with AWD. All trims are delivered with V6 power, with the Taurus SHO adding twin turbochargers for V8 potency at V6 economy. AWD trims are equipped with an auto-manual transmission, and a four-wheel independent suspension is featured throughout the lineup.

For its price, the 2011 Taurus lineup acquits itself well against such competitors as the Honda Accord, Hyundai Azera, Buick LaCrosse, Chrysler 300, Toyota Avalon, and Hyundai Genesis. The Genesis is, however, considered by some reviewers as a particularly refined and luxurious sedan that may outshine even the high-end Taurus Limited – but, at 20.1 cubic feet, at least the Taurus’ trunk is larger. 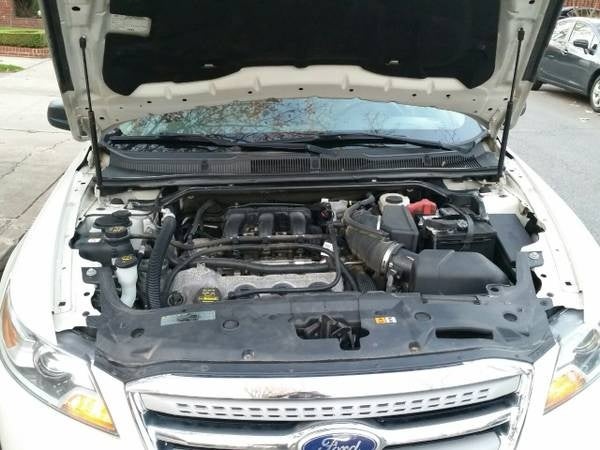 Standard power for the 2011 Taurus SE, SEL, and Limited trims is a 3.5-liter, naturally aspirated V6 engine capable of 263 hp at 6,250 rpm and 249 lb-ft of torque at 4,500 rpm. All FWD trims are equipped with a standard six-speed automatic transmission, while AWD versions get a six-speed auto-manual transmission with steering-wheel-mounted paddle shifters. Variable valve timing keeps gas mileage at a reasonable 18/28 mpg in FWD trims, while AWD trims drop to an estimated 17/25. For those so inclined, towing capacity is maxed out at 1,000 pounds, thus a trailer load of bicycles or brush clippings is not beyond this snappy sedan’s capabilities.

As expected, the 2011 Taurus SHO amps up the power considerably with a twin-turbo version of the standard 3.5-liter V6 powerplant. This up-muscled, variable-valve-timed mill, paired with the standard six-speed auto-manual transmission, will pound out 365 hp at 5,500 rpm and 350 lb-ft of torque at 1,500 rpm to the tune of 17/25, and silly as it might look, can also tow 1,000 pounds of trailer. As is common for the AWD trim lineup, a center-mounted, mechanical, limited-slip differential ensures full-time power to all four wheels.

The naturally aspirated V6 is lauded by most reviewers as highly capable in all situations, though the AWD trims are noted as seeming marginally quicker than the FWD versions from a stop. The up-gunned SHO, though more potent overall, unfortunately suffers from some annoying turbo lag when booted from a stop, according to several reviews. Once it gets underway, however, virtually all reviewers find this up-powered Taurus a truly awesome performer. Reviewers also find timely and alert shifting with both the automatic and auto-manual transmissions, at least on level ground, though some hunting for gears was noted on hilly terrain from both transmissions.

Most reviewers find the Taurus aerodynamically svelte and well insulated from road and wind noise. Ride characteristics are found by virtually all reviewers to be smooth and comfortable with little floatiness or wallowing. The 19-inch tires equipping the Limited and SHO trims were noted, however, to reverberate with sound and fury over rough pavement. With its stiffer, sport-tuned suspension and available 20-inch tires, reviewers note the Taurus SHO rides a bit harder in virtually all conditions than the more sedate trims, but not to the point of distraction.

Tight turns are handled with aplomb in virtually all trims, according to most reviews, with the larger tires getting a surprisingly firm grip and all trims showing little body lean or sway. Steering, even in the SHO, is described by a number of reviewers as a bit over-friendly on the highway, but admirably handy in cramped spaces, especially in combination with the car's comfortably tight turning radius.

With disc brakes all around, the Taurus is described as well-controlled and true when stopping in all situations. Available upgraded brake pads make the SHO especially strong in its stopping prowess. 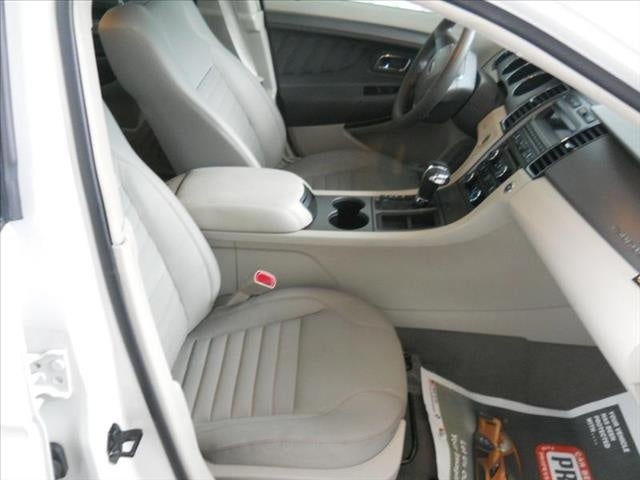 Options are few for the SE, with only a few dealer-installed cargo organizers available. The SEL and Limited, on the other hand, can be delivered with available rear parking sensors, Active Motion seats with massage, heated front and rear seats, DVD touch-screen navigation, a Sony 12-speaker premium audio system, remote engine start, and a power moonroof, with the SEL also gaining many available features that are standard on the Limited and SHO trims. Options for the SHO are more performance- and appearance-oriented, including the SHO Performance Package with 20-inch wheels (also a stand-alone option), recalibrated steering, and bulked-up brake pads.

Reviewers generally favor the Taurus’ dash and center stack layout, with most controls accessible and well-marked, though a few buttons are noted as a bit undersize and looking and feeling too much alike. Gauges are also mentioned as being a bit too deeply set for easy readability. Altogether, though, the Taurus gains kudos from nearly all reviewers for a quiet and pleasant interior, with cabin storage adequate, if not capacious. Luxurious it’s not, but for the price, most reviews find the Taurus’ cabin comfortable – at least in the front seats, as well as aesthetically pleasing, reflecting, for the most part, quality materials and workmanship. 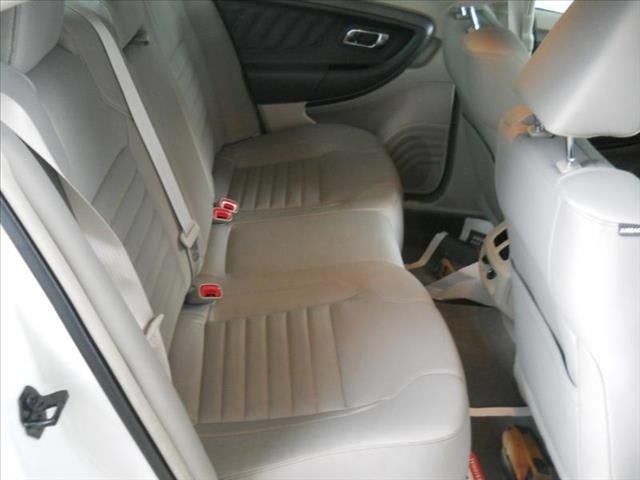 Safety-wise, the 2011 Ford Taurus has all the bases covered. Beginning with four-wheel disc ABS with electronic brakeforce distribution, the list of standard safety features across the lineup also includes traction and stability control, front side-mounted airbags, front and rear head airbags, dusk-sensing headlights, and a post-collision safety system. The SEL, meanwhile, is delivered with a standard remote anti-theft alarm, while the Limited and SHO additionally come with standard rear parking sensors that are optional for the SEL. Adaptive cruise control with collision brake preparation, and the BLIS blind-spot warning system are optional for the Limited and SHO, as are auto-dimming headlights. The well-regarded MyKey feature, with programmable settings for speed and audio control, is standard on all trims as well.

The National Highway Traffic Safety Administration (NHTSA) gives the 2010 Taurus five stars across the board other than a four-star rating for rollover protection in both FWD and AWD versions. As the 2011 trims are essentially identical, there seems no reason to doubt that these trims will continue this admirable record. Meanwhile, the Insurance Institute for Highway Safety (IIHS) gives the 2011 Taurus its best rating of Good in all tests, including roof strength.

The 2011 Ford Taurus has generally been well received, but a few glitches have reared their ugly heads. Those who own the Taurus SHO, for example, seem most disappointed with the turbocharged V6's lack of an aggressive growl, though owners of the non-SHO trims are quick to appreciate the distancing of engine, road, and wind racket. Blind spots also plague all Taurus trims, according to several owners, making the available BLIS system almost required for safer highway cruising. The keyless entry feature is noted as needing work, while some buttons on the otherwise well-laid-out center stack could be sized and placed more conveniently. Finally, a cramped rear seat prevents several owners from showing off their new Taurus to more than one or two average-size adults at a time.

Gas mileage, a comfortable if not overly spacious cabin, decent handling and acceleration, not to mention the always-well-received SYNC technology have virtually all owners praising the next-gen Taurus. The consensus is that this full-size sedan is yet another sign that American automotive technology and engineering are back, that value can translate into driving enjoyment or even, in the case of the SHO, excitement.

Margery love it EXCEPT the STAINS -even from just water!!!- that will not come out of my seats.

Users ranked 2011 Ford Taurus against other cars which they drove/owned. Each ranking was based on 9 categories. Here is the summary of top rankings.

Have you driven a 2011 Ford Taurus?
Rank This Car

Passenger side floor front and back soaked. Can't tell where water is coming from. Can hear water sloshing around when I brake or pull off. Does anyone know how it's getting into the car and how to ...

I have a 2011 Ford Taurus no response. Everything works like it is supposed to but the engine will not crank. No response when turn key. No clicking no trying to turn over nothing... what could my...

How Do I Unlock My 2011 Ford Taurus With The Key Panel The Factor Number Wi...

I have a 2011 Ford Taurus. I have been having electrical problems with it since i bought it. What happens is while driving randomly the dash sensors all go off(e-brake, traction, door/trunk open, low ...