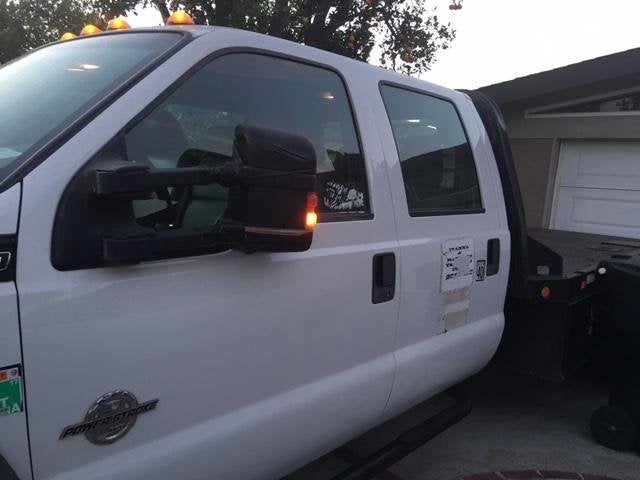 Need the biggest, baddest, trailer-haulingest full-size pickup out there? That would be the redesigned, five- or six-passenger 2011 Ford F-450 Super Duty. This stylish heavy hauler is available in four trim levels, the base XL, lower mid-level XLT, upper mid-level Lariat, and top-shelf King Ranch, and all trims are delivered with dual rear wheels (DRW), part-time four-wheel drive (4WD), crew cab configuration, turbodiesel V8 and an 8-foot bed. All this doesn’t come cheap, though, with a standard-equipped XL starting at over $48,000. Nevertheless, this monster has the highest towing capacity in its class at some 24,000 pounds in the available fifth-wheel configuration. Chevy’s Silverado HDs, Jimmy’s Sierra HDs, and Dodge’s Ram 3500s have a ways to go to equal this capability.

The sole engine for the 2011 F-450 Super Duty is an up-powered 6.7-liter turbodiesel V8 that, according to Ford, runs cleaner and 18% more efficiently than 2010’s diesel. The brain behind this beast is a six-speed auto-manual transmission that allows 390 hp and a truly super 735 lb-ft of torque. Even with the standard hitch, this behemoth can haul 16,000 pounds of trailer or tote 4,920 pounds of payload. Also standard with all trims is a rear limited-slip differential and auxiliary transmission-fluid cooler. Lower trims feature manual locking hubs and manual hi-lo gear selection for the 4WD system, while the higher trims leave such functions to electronic means.

Options run the gamut from many of the standard features on the higher trims available for the XL and XLT to a power sunroof and hard-drive navigation for the higher trim levels. Depending on trim level, a heavy-duty alternator, a power-takeoff, spray-in bed liner, and fifth-wheel hitch configuration are also available. The highly touted FX4 Off-Road package, with features that include beefed-up shocks, hill descent control, all terrain tires and skid plates, is also available throughout the lineup.

Owners of the 2010 F-450 Super Duty find its cabin a bit dated and its price a tad steep, while maneuvering this titanic pickup in city traffic and crowded lots presents a monumental challenge to more than a few owners. On the whole, however, titanic towing capacity, surprisingly supple ride and handling characteristics, and the popular SYNC interface have virtually all owners more than satisfied with their choice of the F-450 Super Duty.

My Car, The Oil Level And Water Level Are Always Low, Water And Oil Are Va...

Hi all, I'm installing tracking modules for my company's fleet and everything's been going pretty smoothly up until I got to our boom truck. It's a 2011 F-450 Super Duty. The wiring lists I've looked ...

The refrigeration fluid is vanishing I have to add it in a regular basis, I checked the system there is no leakage, and the radiator is ok. Please what could cause it?

We Have A F450 And The Exhaust Fluid Light Is On And The Computer Shows"Spe...

This vehicle is a military vehicle so we need to get it back to the unit and we dont have much experience with vehicles needing exhaust fluid so it is new to us. So the dash is showing that the vehic...