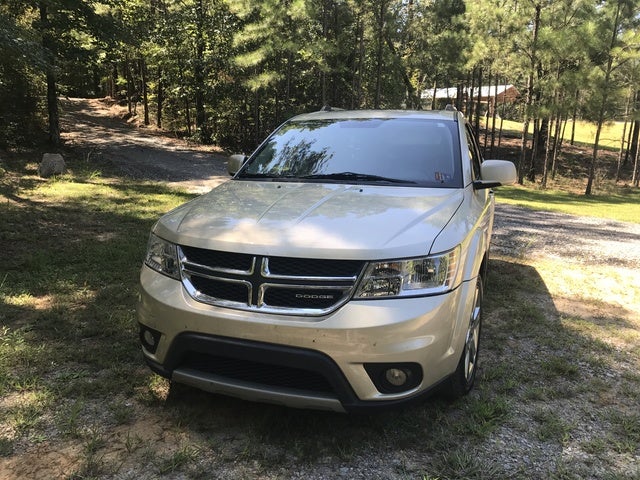 A great new engine and some styling tweaks help make the 2011 Dodge Journey an attractive choice for families on a budget.

Though eminently competent, the 2011 Journey isn't quite polished enough to take on the best in the highly competitive mainstream crossover market.

Caught somewhere between the new Dodge and the old Dodge, the 2011 Journey benefits significantly from an all-new 3.6-liter V6 engine yet is held back by a distinctly rental-car personality. With an appealingly low base price, plenty of room and optional all-wheel drive, the 2011 Journey makes an ideal suburban family machine. Despite its obvious utility and value, the 2011 Journey's slightly stodgy demeanor and lack of refinement relegate it to second-class status behind the market leaders from Honda, Toyota and GM.

Sharing its bones with the mainstream Dodge Avenger sedan, the Journey rolls into 2011 with a new look and tangible improvements under the skin. Seating up to seven passengers, the Journey makes a superb around-town errand-runner or highway commuter. Clever packaging, long a Mopar strength, results in a crossover that makes life easy for its owner.

The 2011 Journey is offered in five imaginatively named trim levels. Buyers of the base Journey Express get a rather underpowered (if thrifty) four-cylinder engine, a smattering of convenience features and lots of standard safety equipment. The step-up Journey Mainstreet trim receives the torquey new V6 engine, along with a more capable 6-speed transmission and satellite radio. The sport-themed Journey R/T gets a body-color grille and more aggressive wheels, while the Journey Crew features power seats, automatic climate control and remote start. The range-topping Journey Lux trim offers a rear-view camera, leather upholstery and 19-inch chromed alloy wheels. 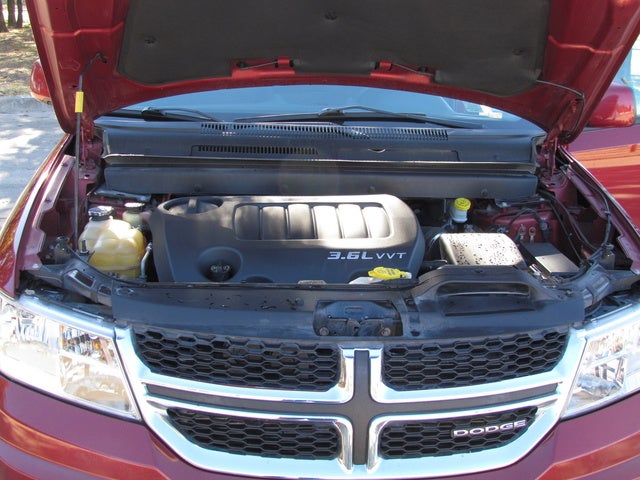 Base power in the rather ironically named 2011 Journey Express is Dodge's 2.4-liter corporate four-cylinder. Given that even a stripped-down front-wheel-drive Journey clocks in at 3,700 pounds, the four-banger's meager 173 hp and 166 lb-ft of torque aren't enough to provide acceptable acceleration. With an old-tech 4-speed automatic transmission, the four-cylinder Journey Express gathers speed quite slowly and makes highway passing an exercise in patience.

All other 2011 Journey trims feature the new Pentastar V6 that's making the rounds at Dodge. Displacing 3.5 liters and featuring all-aluminum construction and four valves per cylinder, the Pentastar is easily the best new Mopar motor in a decade. Lusty and smooth, the V6 churns out 283 hp and 263 lb-ft of torque while still returning a respectable 25 mpg on the highway. Paired with an equally new 6-speed automatic gearbox, the Pentastar gets even the heaviest AWD Journey Lux off the line with plenty of verve. The optional all-wheel-drive system normally drives the front wheels but can send power rearward automatically when slip is detected.

The mainstream crossover segment isn't known for serving up entertaining drives, and the 2011 Journey, even in sporty R/T trim, is unfortunately no exception. Though revisions to the four-wheel-independent suspension have greatly reduced body roll in the 2011 Journey, handling is still far from playful. Steering feel, also tweaked this year, is marginal at best, with over-boosted power assist that helps only in tight quarters. Ride comfort is good in base models, less so in the 19-inch-wheel-equipped R/T and Lux, where low-profile tires impart a degree of harshness over sharp bumps. Braking is by discs at all four wheels, vented in front, with antilock control.

In addition to its new engine, the 2011 Journey also benefits from a stylishly updated interior. While the old cabin seemed cheap and uninspired, the Journey's new interior looks swanky and upscale, with much better materials and a sweeping design. The stylized instrument panel is rendered in brushed metal, and the dashboard's sweeping design is both attractive and functional, placing most controls within easy reach.

The seats, whether upholstered in cloth or leather, are a bit flat but provide decent support and adjust to fit most drivers. Leg- and headroom are good in the first and second rows yet quite cramped in the third, while elbow room suffers throughout, a consequence of the Journey being based on the rather narrow Avenger platform. The seats are easily stowed, and the 2011 Journey can carry up to 67 cubic feet of cargo behind the front seats.

Befitting its status as a family car, the 2011 Journey comes equipped with nearly every safety feature in Dodge's arsenal. Front, side and curtain airbags are standard, as are electronic roll mitigation (an advanced version of stability control) and seatbelt pre-tensioners. Though the 2011 Journey has yet to be crash-tested by the NHTSA, the 2010 model earned an impressive five-star rating in both front and side impacts.

Dodge Journey owners are very pleased with their vehicle's practical skill set and load-carrying capacity. Many owners like the comfortable seats and the innovative features such as the beverage cooler. Less impressive are the Journey's underpowered base engine and lackluster handling. Buyers love the aggressive look of the 19-inch wheels, but warn of high tire replacement costs.

Users ranked 2011 Dodge Journey against other cars which they drove/owned. Each ranking was based on 9 categories. Here is the summary of top rankings.

Have you driven a 2011 Dodge Journey?
Rank This Car

Doors Will Not Lock From Drivers Or Passengers Side Or The Key Fob.

I cannot lock the doors or unlock them for that matter. I tried the driver's and passenger's side and with the key fob. It doesnt even make the sound like it locks. I treid to change the fuse and i...

I have a 2011 dodge journey. I just recently replaced my starter. Since replacing it my car has been acting up. I was told my starter relay needed replaced. I've since replaced it twice. My car wil...

Can I drive my vehicle with a bad temp sensor and/or thermostat.

Dodge Hatch Stuck Shut How Can I Manually Pop It Open?

Do You Buy Used Vehicles

do you buy vehicles have 2011 dodge journey crew