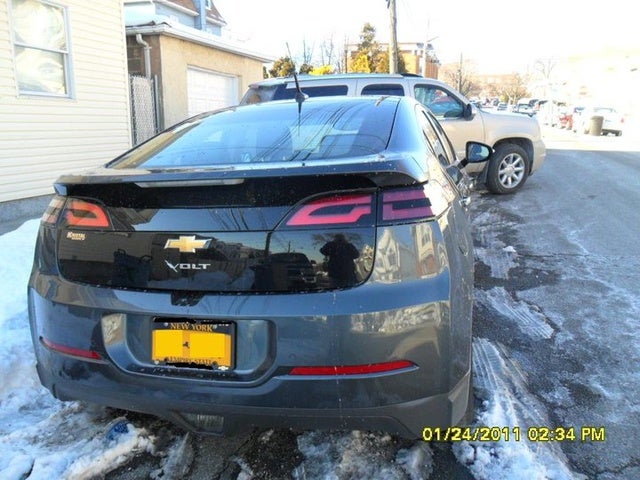 Following several years of anticipation by the automotive public, the Chevrolet Volt electric car finally makes its debut in late 2010. Powered solely by an electric motor, the Volt uses its 1.4-liter FlexFuel gas/E85-powered engine to charge the powerplant's lithium-ion battery when depleted, greatly extending the Volt's driving range. Running only on electrical power and a single battery charge, the Volt can travel up to 40 miles, depending on the use of air conditioning, headlights, the radio, and other electrical components. When the battery charge runs low, the gas engine effortlessly kicks in to recharge the 16-kilowatt lithium-ion battery, which enables the Volt to travel several hundred additional miles.

The electric motor produces the equivalent of 150 hp and 273 lb-ft of torque. The Volt has a top speed of 100 mph.

In taking the Volt from concept vehicle to production car, Chevy made a number of exterior design changes. While the concept car had a hunkier look, with a squashed-down roof, huge wheels, and a more aggressive feel, the production version of the Volt features a more aerodynamic shape, especially in the front fascia area, which helps reduce wind resistance and improve the Volt's range when running only on the electric motor. Chevy did carry over some components from the concept to the production cars, including a closed front grille, athletic stance, exterior mirrors, and some rear-end elements.

When powered by the electric motor, the Volt operates very quietly. Even when the gas-powered engine kicks in, drivers will find the four-passenger cabin quiet and comfortable.

Inside, the Volt has a futurist design, with a cockpit that wraps around the driver and front passenger. The high-tech dashboard includes a 7-inch LCD touchscreen display and a 7-inch driver-configurable LCD instrument cluster with digital readouts in place of traditional analog or digital instrument gauges. Drivers can configure the LCD display to project a wide range of readouts related to the powerplant, such as the current charge in the battery and the distance the car can travel on remaining battery power, as well as traditional speed and fuel tank readouts.

Drivers can use the center-mounted LCD touchscreen to view additional engine and mechanical information, and to adjust the audio and climate controls. Bluetooth wireless connectivity for cellular phones and a USB audio connection for music streaming are among the other standard features. Drivers can add such options as an energy-efficient, six-speaker Bose audio system, a 30-gigabyte hard disk drive for music storage, and a navigation system with voice recognition. Owners can also add optional leather seats. Safety features include knee, dual-stage front, side-impact, and roof-rail airbags.

What's your take on the 2011 Chevrolet Volt?

Marclink For the price and the low miles this car has not even been broken in yet, inside and out you won’t find a better deal. Once again please feel free and call anytime with questions priced at $8,800.00 this car is going to move quick, cash or cashiers check will be the excepted form of payments, my schedule is very open if you’d like to schedule a showing give a call and we’ll set it up...

Marclink This car is amazing drives,Handles and looks like a car three times the price. I’ve never had anything but compliments on it

Marclink This car drives, Handles, and looks like a car that would cost a person three times what I’m asking. I’ve never had anything but compliments on it as far as looks go, driving it all I can say is a real pleasure

Users ranked 2011 Chevrolet Volt against other cars which they drove/owned. Each ranking was based on 9 categories. Here is the summary of top rankings.

Have you driven a 2011 Chevrolet Volt?
Rank This Car

Do Chevy Volt Values Drop Drastically When They Are Over 100,000 Miles And ...

You have been running an ad for a Chevy Volt in Chicago listed for $7000. Please be advised that the "seller" does not respond. This a fake. Please remove and save everyone a lot of time.