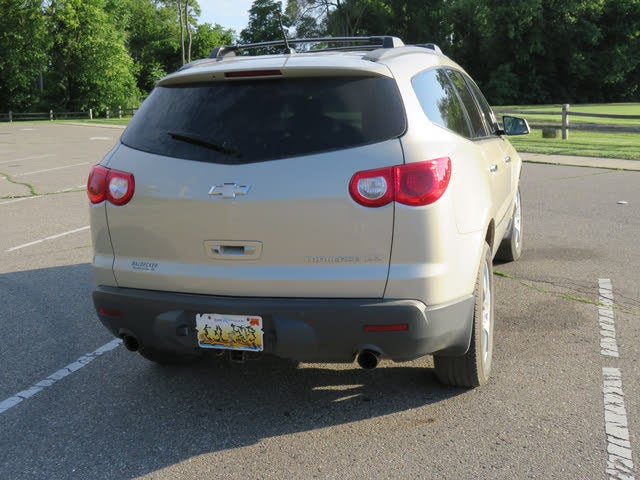 Seating for eight, as well as a comfy ride, cavernous cargo area, tons of standard features, and a five-star safety record should generate some sales for the 2011 Chevrolet Traverse.

The bulky 2011 Traverse crossover loses a bit of luster with some side visibility issues, an overabundance of hard interior plastic, and its adult-challenged third row.

Sure, it’s not perfect, but the 2011 Chevrolet Traverse offers so much cargo room, performance, and practicality that its at-best-average gas mileage and a few chintzy interior materials ought to be overlooked by those in the market for an otherwise well-wrought CUV. Great safety scores and eight-passenger seating don’t hurt, either.

It’s obvious that GM has a winner in the 2011 Chevrolet Traverse midsize crossover. Family-friendly, capacious, quiet, and reasonably quick, this eight-passenger mini-‘ute, mounted on GM’s Lambda frame, shares a platform with its Buick Enclave and GMC Acadia stablemates and admirably fills the niche between a honkin’-size SUV and the effective, but, let’s face it, punch-less minivan. Heck, with 116 cubic feet of seat-down cargo space, the Traverse boasts more capacity than most SUVs or minivans. As a bonus, it has a hefty 24 cubic feet of grocery/luggage space behind the third-row seat. Altogether, interior space alone has put the Traverse near the top of this ultra-competitive class. Add in plenty of standard gizmos and goodies, better-than-adequate V6 power, and nearly sedan-like ride comfort, as well as a likeable base price, and this convivial crossover seems destined to dominate the market for some time to come.

Three trims, the base LS, midlevel LT, and top-shelf LTZ grace the 2011 Traverse lineup, with the LT further divided into LT1 and LT2 gradations. All trims and sub-trims are available in either front-wheel-drive (FWD) or full-time all-wheel-drive (AWD) variations, and all feature V6 power, a rear spoiler, and three rows of seating. Furthermore, due to its rather recent introduction for the 2009 model year, the Traverse has undergone only minor changes. For 2011, this sizeable crossover sports only optional heated cloth seats for the LT1, while the rear-seat USB port has been relocated for easier access.

The most serious competition for the Traverse, besides its Enclave and Acadia cousins, includes the Ford Flex, Honda Pilot, and Mazda CX-9. With similar pricing, brand-specific creature comforts and performance features, and three rows of seating across the spectrum, perhaps only the Traverse’s class-leading cargo-carrying ability will separate the haves from the have-nots.

Towing capacity is maxed out through the entire lineup at 5,200 pounds, while mileage for all three trims is estimated at 17/24 mpg in FWD versions and 16/23 in AWD trims. Additionally, full-time-AWD traction on trims so equipped is managed by a mechanical center-mounted, limited-slip differential.

Most reviews find the Traverse’s V6 power to be more than adequate for merging and passing, while one test of the 281-hp V6 had it scoot from 0-60 in 8.6 seconds. Reviewers additionally note that FWD trims seem marginally quicker off the line than do AWD trims. The six-speed auto-manual transmission is described by most reviewers as smooth and responsive. Several reviews, however, mention a disturbing hesitation to downshift on the highway when in full automatic mode. Also mentioned in passing by a few reviewers is that the 288-hp V6 in the LTZ sounds a bit throatier on acceleration than does the 281-hp mill equipping the LS and LT trims. Performance-wise, there seems to be little difference between the two.

Depending on the trim level selected, three different standard wheel sizes are available for the 2011 Chevy Traverse. The LS mounts 17-inch steel wheels, the LT trims roll on 18-inch alloy wheels, and the LTZ comes with standard 20-inch polished alloy wheels. An independent front suspension and MacPherson front struts are complemented by front and rear stabilizer bars and a multi-link rear suspension.

Nearly all reviewers find the 2011 Traverse’s ride to be comfortable and steady, with surprising agility for such a large and heavy vehicle. Steering is described as straight and true, with little body lean when taking corners at some speed. Additionally, reviewers find braking to be above average, with no noticeable pedal squish. Many reviewers also find this hefty CUV to be remarkably easy to maneuver in city traffic, despite its considerable size. Notwithstanding its domesticated ride and handling characteristics, more than a few reviewers mention that the Traverse won’t even pretend to mimic the typically more nimble sedan or coupe.

Options for the 2011 Traverse include heavy duty trailer-towing equipment, featuring heavy-duty engine cooling, hitch and wiring, for the entire lineup. Lower level trims can be optioned with many of the standard features found on the higher trims, while LT1 and higher versions can be equipped with available rear-seat DVD entertainment, touch-screen DVD navigation, a power sunroof, and remote engine start.

Reviews are universally favorable regarding the Traverse’s copious cabin storage, easily readable gauges, and thoughtfully located controls. One glitch, however, is the liberal use of low-grade hard plastics throughout the cabin, lending it a rather low-end appearance in the minds of more than a few reviewers. Third-row accessibility, meantime, is noted by virtually all reviewers as better than usual, and sliding, tilting second-row seats combined with large rear passenger doors means entry and exit, even from the third row, is reasonably trouble-free. Those third-row seats, however, though easy to get to, have been panned by many reviews as a bit cramped and uncomfortable for average-size adults.

The National Highway Traffic Safety Administration (NHTSA) gives the Traverse five stars across the board in front and side impact testing, as well as four stars for both FWD and AWD trims in rollover tests. The Insurance Institute for Highway Safety (IIHS) also weighs in with equally high scores for front and side impact protection.

Though owners generally find few faults with the 2011 Traverse, the most glaring include somewhat tepid fuel economy, the pint-size third-row seat, a few chintzy cabin materials, and a distracting whine from the 281-hp V6 during heavy acceleration. A few owners complain that the Traverse seems a tad underpowered, while the LTZ trim level strikes an owner or two as a bit overpriced. At least one owner, additionally, complains of a disconcerting roll on even slight inclines before the transmission engages.

On the plus side, interior and exterior styling, as well as capacious passenger space and ride comfort, snags the praise of owners, as does, of course, that humongous cargo area. The quiet cabin, easy-access third-row, respectable handling characteristics, and scads of standard features, even in the lower trims, also bring kudos from owners.

What's your take on the 2011 Chevrolet Traverse?

Users ranked 2011 Chevrolet Traverse against other cars which they drove/owned. Each ranking was based on 9 categories. Here is the summary of top rankings.

Have you driven a 2011 Chevrolet Traverse?
Rank This Car

My check engine light came on not long after starting car....there was no power reduction or loss everything seems fine...what could cause that light to stay on?

93 views with 4 answers (last answer about a month ago)

I have a 2011 Chevrolet Traverse 152,000. Couple days ago i felt my engine making a little noise. Whenever i accelerate the gas pedal it makes a sound like a racing car then when i hit 40-45 it st...

What can cause a message center and odometer display to not appear on the display dash bore?

Check Engine Light Comes On And After A While Or Day Goes Off.

My check engine light comes on steady. Went to have code read and it comes up as P008, however the light was on for a day and a half. I stopped at the post office right after having the code read an...